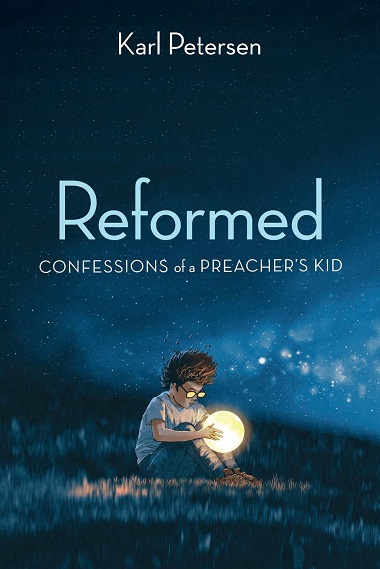 Karl Petersen has managed to find time to write four books between his day job teaching English at Kwantlen Polytechnic University in Richmond and creating a home with his wife and two daughters.

He will launch Reformed: Confessions of a Preacher’s Kid this Saturday evening (September 21) at Grace Vancouver Church.

Here is the publisher’s (Wipf and Stock) description of the book, followed by two excerpts:

A heart-warming childhood memoir about the son of a Dutch Reformed preacher, Reformed sweeps us into a young boy’s world of trials and redemption. Tornados, disabled siblings, death, guns, fears of losing his mother, and the mysteries of sex are challenges Karl faces before he is 10 years old. [He grew up just across the border in Washington.]

He wrestles with the moral and theological puzzles that shape his world. Sometimes his conclusions challenge the status quo. When bad decisions lead to delinquency and crime, he must learn how to respond as flashes of truth and grace ignite in him the first flames of faith.

Without self-pity, nostalgic sentiment or indictment of his past, Petersen’s stories – vivid, candid and humorous – draw us into his quirky family of 10 in a time before iPads.

Terry led our tribe out behind his barn to a pasture where he kept his pigs. We came to a hollow with a mud hole near the bottom of it where his pigs would wallow. His pigs were all there, lying stone still where the tornado had slammed them into the mud. It was like a battlefield scattered with wounded and dead hogs. We walked among them, checking for signs of life. Near the pond a couple of pigs were stuck neck deep, unable to move. They simply grunted a couple of mournful, lonely grunts as if to say, “No rush, but when you have a minute . . . ”

“What are you going to do with them all?” Don asked.

“Help me out here,” Terry said.

They turned a couple over.

“Not a scratch on ‘em,” Terry said. “I say too good to waste and good enough to eat.”

He’d send them to get butchered, but the word would come back that they were no good. The meat from every pig was shot through with shards of wood. They’d died a gruesome death.

As we drove home, scattered debris on the ground flashed by the car window as if still caught in the tornado – tree branches, barn siding, a chair, t-shirts, a Cubs baseball cap. The word was no one had been seriously injured and not one soul was lost. Like Jesus sending demons into the swine, somebody said, God had let the pigs take the hit for us. No souls were lost, but in a way I couldn’t have explained, mine was found when that funnel cloud touched down. God had got my attention.

My parents believed man was endowed with a spirit and intellect animals did not possess. According to our Dutch reformed doctrine, man was “the crown of creation,” and animals were under man’s dominion. Some said animals would not go to heaven, so it was best not to love them too much. But my doubts about this idea, along with doubts about shooting the sparrow, prodded at my chest like a woodpecker on a young tree. I had questions.

“Dad, where do animals go when they die if they don’t go to heaven?” I asked, poking at my breakfast cereal with a spoon.

Dad gazed up from his fried egg. Here were more animal questions from one of his boys. He wondered where it was going this time.

“When we eat roast beef, we kill cows, right?” I continued. “So where do they go after they die?”

“We kill cows because we need to eat, like your snake Bomber needed to eat those frogs, right?” Dad said.

“And we can kill animals if they’re pests, too, right? Don said we can kill all the starlings and house sparrows we want because they’re invaders from England, and they crowd out native species. They’re nest robbers, so it’s okay to kill them, right? But then if we kill them, do they go to heaven?”

There was a long pause. Dad seldom stated his beliefs without careful thought. He understood his role as a pastor never more so than when it came to influencing young minds. Keith, six years old, listened, spooning cereal over the lip of his bowl into his mouth.

“I don’t like the thinking that says you can kill things just because they aren’t native to our country,” Dad said finally. “Your grandparents immigrated from Holland. Do you think it would have been right for people to shoot at them? Or, how about the people coming here from Asia?”

“Well, I’ll shoot them before they get here if I go to Vietnam,” I blurted.

“You’re not going to Vietnam,” he said solemnly. It sounded more like a prayer than a statement.

Karl Petersen has also published two collections of poetry, Bellowing in the Common and Urban Fits, and a novel, The Kingdom of What Is.