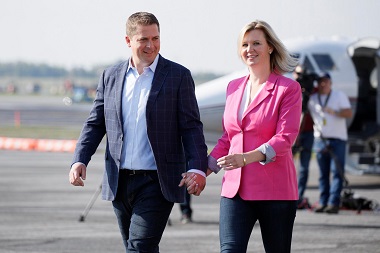 Andrew Scheer with his wife Jill. He is being targeted as a conservative Christian, but the Conservative Party is not particularly hospitable to social conservatives these days.

I suppose it’s normal for everyone involved in a highly charged political campaign to feel they’re being overlooked, that their unique offerings of wisdom are not being properly appreciated.

So, I’m a little hesitant to make the case that social conservatives are being ill-treated – except that the evidence seems so strong. I believe it from my own experience, but will rely primarily on the comments of some trenchant observers who pay close attention to such things.

Ray Pennings, co-founder and executive vice-president of Cardus, did an impressive job of introducing the issue in a recent Policy Options article:

It seems surprising that just 15 years ago, Parliament’s vote redefining marriage to include same-sex relationships passed 158-133 with 16 MPs absent. Ninety-three Conservatives, 32 Liberals, five Bloc Quebecois MPs, and one New Democrat (as well as two Independents) cast a “social conservative” (so-con) vote on this question. These dissenters knew they were swimming against strong cultural trends, but were still part of the mainstream in their political parties.

Much has changed since then and the upcoming federal election campaign will test the commitment of Canadians and their political leaders to tolerance and including people whose views may not fit today’s cultural mainstream.

Current trends and the so-cons

Few so-cons, therefore, expect politics to answer their concerns. Most political appeals for their votes contribute to a cynical mood at best. They also feel profoundly misunderstood.

The so-con label is one that, for the most part, is imposed, not chosen. The small percentage who embrace the label are divided between purists and incrementalists.  Most voters who fit the so-con profile are silent observers. For them, “so-con” is a reluctant identity, disowned because it is most frequently heard as an epithet or insult. The coverage of so-con issues in politics and media tells a story in which they do not recognize themselves.

John Stackhouse, the well known scholar and author (formerly at Regent College, now at Crandall University), weighed in with this tongue-in-cheek description:

Social Conservatives  These are the loathsome folk who vote Conservative, or maybe now PPC, in hopes of . . . well, of what? Of putting women back in the kitchen? Of requiring businesses to close on Sundays? Of making schoolchildren recite the Lord’s Prayer every morning?

There aren’t many of those folk in Canada. But “social conservatives” in fact is code language for “prolifers” – whom opponents try all they can to link to The Handmaid’s Tale. Prolifers, alas, are rather at sea just now, having discovered that Andrew Scheer is just the Catholic version of Stephen Harper: prolife enough to get nominated, but not prolife enough to actually legislate – or come within a kilometre of legislating – about abortion.

Stackhouse’s “It’s time for ‘political catch-phrase bingo'” (a cross between a political primer and Ambrose Bierce’s A Devil’s Dictionary) goes on to ‘define’ these terms: middle class; community; there’s no place in Canada for X; bullying; secular; values voters; (human) right(s); and all Canadians. Pointed and amusing.

A recent opinion piece by Paul Willcocks in The Tyee (‘Scheer wants you to think abortion access would be protected if he wins. It wouldn’t.’) gives a sense of the way many in media are imposing a pejorative social conservative narrative, if not the so-con label itself.

After stating that “Andrew Scheer has an abortion problem,” and that his “efforts to clarify his views on abortion just made things murkier,” Willcocks argued:

All of which leaves at least the possibility that under a Scheer Conservative government, new laws could limit Canadians’ access to abortion.

Scheer says that his approach is the same as the Stephen Harper government. Conservative MPs introduced three bills aimed at restricting access to abortion in the Harper years; all were defeated.

But there are some big differences.

First, Harper had united the right and vanquished the Liberals. He had earned respect from caucus and kept tight control. Scheer, however, limped into the leadership. He was the first choice of just 22 percent of party members and, after 13 ballots, eked out a win with 51 percent of votes to Maxime Bernier’s 49 percent. It’s not a mandate that gives a leader great authority.

Second, Harper never seemed particularly committed to religious conservative causes. Scheer, however, is ranked as “100-per-cent prolife,” by anti-abortion political group RightNow, “arguably the most pro-life leader the Conservative Party of Canada has seen since John Diefenbaker.” (Whose term as leader ended more than 50 years ago.) Scheer’s opposition to same-sex marriage in a rather odd 2005 Commons speech released by the Liberals suggests a real commitment to religious conservatism.

And fourth, anti-abortion forces, while a small minority, have found ways to exercise great influence (like helping Scheer get his chance to be prime minister).

An article in The B.C. Catholic suggested that political and media critiques of Scheer are based on the fact that he’s Catholic:

Anti-Catholic sentiment is “alive and well” as Canadians head into a federal election, warns the president of the Catholic Civil Rights League.

The comments by Phil Horgan were echoed by other Catholic advocates in the wake of recent criticism of Conservative Leader Andrew Scheer, a Catholic, particularly on the issues of abortion and traditional marriage.

Horgan will find some support for his view in a new book, Not Like Us: Anti-Catholic Thought in English Canada Since 1900 (McGill-Queens University Press, 2019):

In 20th century Canada, mainline Protestants, fundamentalists, liberal nationalists, monarchists, conservative Anglophiles and left-wing intellectuals had one thing in common: they all subscribed to a centuries-old world view that Catholicism was an authoritarian, regressive, untrustworthy and foreign force that did not fit into a democratic, British nation like Canada. . . .

Anti-Catholicism helped shape what it means to be “Canadian” in the 20th century. Not Quite Us documents how equating Protestantism with democracy and individualism permeated ideas of national identity and continues to define Canada into the 21st century.

On the other hand, one might take note of the fact that our current Prime Minister is also Catholic, as was his father Pierre (not to mention Joe Clark, John Turner, Brian Mulroney, Jean Chrétien and Paul Martin).

Andrew Bennett, director of the Cardus Religious Freedom Institute (and a Catholic himself), properly broadened the focus in his comments for The B.C. Catholic article:

“I think it’s thoroughly disreputable that any party would attack anybody for what they hold to be true, whether moral beliefs or religious beliefs,” said Bennett, the director of the Cardus Religious Freedom Institute.

“If we are going to enjoy a genuine common life as Canadians we have to be willing to recognize deep differences in our society and people are going to believe different things.

“Not only that, but we need – if we truly believe in religious freedom – we need to expect that our public figures, our political leaders, have as much right as anyone else to live both publicly and privately according to their deepest-held beliefs.”

While Willcocks argued that Scheer’s “real commitment to religious conservatism” is a threat, political science professor Jonathan Malloy wrote in The Vancouver Sun (originally in The Conversation, under the header “Canada’s marginal ‘Christian right'”) that such statements are overblown:

The political power of the American Christian right naturally leads to interest and speculation about the influence of similar groups in Canada. But social conservatives and evangelical Christians are a marginal force in Canadian politics, even in the Conservative Party of Canada. And research finds their dynamics here are quite different than in the United States.

Is there a Canadian Christian right at all? Yes and no.

The Christian right is closely associated with evangelical Christianity, and perhaps 10 to 15 per cent of Canadians (depending on the survey method) are evangelical Christians. Nearly all are strongly conservative on issues of reproduction and sexuality. But their broader political views vary considerably. Few would support “dominionist” ideas of imposing a theological state. . . .

The largest evangelical Canadian organization, the Evangelical Fellowship of Canada (EFC), avoids protests and partisan engagement. While firmly socially conservative, the EFC engages on a broad range of issues that go beyond Christian right ideas. For example, it has taken a strong stand against Bill 21 (banning religious symbols) in Québec, even though the legislation will have little effect on evangelicals. . . .

Despite their bluster on reproduction and sexuality issues, Canadian evangelicals are on the defensive. And the Conservative Party of Canada has done a masterful job retaining evangelical support despite not delivering on their key priorities.

So while there’s something resembling a Christian right in Canada, its influence is limited and the context quite different from the United States. It does have policy successes, but not many. The broader picture is one of marginal influence and largely defensive battles.

Note that Malloy focuses on evangelicals rather than Catholics, though I’m sure he would agree there is much common ground between social conservatives in the two branches of the Christian faith.

Here are two other helpful articles:

* John Stackhouse: Fearing the religious right in Canada – or not (yet)

A couple of events are coming up in the next few days which will feature a considerable amount of social conservative teaching and content:

← Reformed: Confessions of a Preacher’s Kid
Cracks in the concrete: church planting in Vancouver’s core →