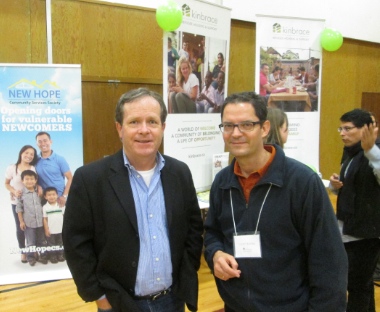 Churches and other public buildings may be necessary to house refugees in the short-term if Canada is to achieve its goal of bringing 25,000 refugees into the country.

Chris Friesen, director of settlement services for Immigrant Services Society of BC (ISSofBC) told a recent gathering that he will be meeting with housing and social planning representatives from the City of Vancouver later this week to see about activating emergency housing protocols that would normally be used in severe weather.

Participants heard from several speakers, spent time in groups praying for refugees and mingled as they sought more guidance from the ministries which had set up booths.

John Hall, executive director of Missions Fest, hosted the evening. He said, “We want to whet your appetite and help you to learn enough to get on your way. He introduced three speakers who addressed key ways for Christians to get involved with helping refugees. 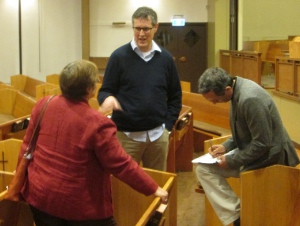 Chris Friesen, from Immigrant Services Society of BC, says there are a wide range of ways for church people to help out refugees.

Chris Friesen pointed out that Government Assisted Refugees (GARs) are, as the name suggests, supported by the government financially. Prime Minister Justin Trudeau’s commitment applies to this group.

About 11 percent of all GARs come to BC. All “receive immediate transitional housing and first language resettlement assistance support” at ISSofBC’s Welcome House downtown (it will move next door to First Christian Reformed Church on Victoria Street in east Vancouver next spring) and settle in Metro Vancouver. A family with two children would receive $1,434 per month, while a single person would receive $734.

Friesen said later, in a phone conversation, that churches and individual Christians can help in any number of ways. Whether or not the 25,000 refugees arrive by the end of the year – though that timeline is being bandied about, he doesn’t know of any evidence that Trudeau actually promised that deadline – they will be coming, and Metro Vancouver can expect about 2,800 of them. “That would be three times what we are currently dealing with,” he said.

He noted that at the Royal Oak gathering, “some churches stated to me their willingness to explore” short-term hosting of refugees on their premises.

Friesen said there are plenty of ways for anyone “driven by mission” to help out. While some church groups will undertake the serious commitment of sponsoring refugees, others can help in ways which require less commitment, from being “settlement mentors” to taking families out on weekend outings and offering “welcoming packages” with items like calling cards (to phone home) and various staples.

He also said it would be nice if a few churches near the new Welcome House could “come together for a community evening or a shared meal.”

When asked how churches have been doing with refugees, Friesen said, “We’re doing a better job of articulating the need” – which I took as a polite way of saying there is room for improvement. 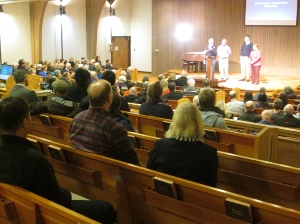 Helen Allen, a retired social work professor who has been involved with United Church refugee initiatives, discussed ways in which private sponsors can support refugees. The process, she said, was developed in the 1970s and 1980s in response to the Vietnamese boat people and other refugees.

She said most denominations and religious groups are Sponsorship Agreement Holders, either at the national or regional level. They can offer full sponsorship (the refugees would not rely on welfare at all) or blended sponsorship (meaning they would have to cover about half the costs).

Groups of five or more can sponsor refugees, if they can demonstrate financial viability. This would be another way for church members to be involved.

She said “it becomes very important to be open-minded. Your assumptions about what you think refugees need and what they do need can be very different.”

James Grunau, executive director of Journey Home, said those seeking asylum (Refugee Claimants) are already with us, but are awaiting decisions on their status. He points out that according to the UN Refugee Convention, they are allowed to come to Canada in any way they are able; they are not here illegally.

He said three Christian organizations – Journey Home, Kinbrace and New Hope – are the groups that provide housing for asylum seekers, though they must turn some away; roughly 1,000 asylum seekers arrive every year in Vancouver.

Grunau said there are several ways in which churches can help. In particular, they can help by finding housing, by easing the refugees’ way as they settle (getting access to food, transportation, medication, etc) and by providing community. 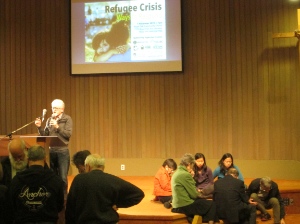 The prayer groups began with lamentation, then prayed for local churches to open their hearts to refugees, and then for the refugees themselves.

He pointed out that Journey Home started as a house group (of Willingdon Church) and “before we knew it we had a rental home being used by refugees.”

A fourth speaker, Seyar Zafar, spoke of his family’s arduous journey as refugees from Afghanistan. Dave Carson of Hope Vancouver led a time of prayer in which participants broke into small groups and prayed for a spirit of lamentation, for open hearts in the church community, and for refugees on various stages of the journey.

All over Metro Vancouver there are signs that churches are taking up the challenge to help refugees. Here are a few examples that have come to my attention (I’d love to hear about more):

On Friday (November 6), Kitsilano Christian Community Church is hosting Songs of Hope, a concert featuring Tom Arntzen & the Gospel Giants, Asher Graig-Morrison and The Kwerks: “This joyful celebration of gospel and traditional favourites will help Kits Church raise $30,000 to sponsor a refugee family.”

The congregation of Knox United Church has announced that it is “working with folk from six neighbouring west side congregations, including United Church, Presbyterian and Mennonite, to sponsor refugee families in response to the refugee crisis unfolding before our eyes in current news reports.”

As of mid-September, Granville Chapel had already received pledges for more than $40,000 to sponsor refugees; the congregation hopes to sponsor two families.

An October 19 article in The B.C. Catholic noted that about 30 parishioners and guests attended a forum September 30 to learn more about the Roman Catholic Archdiocese of Vancouver refugee sponsorship program. Evelyn Vollet, director of the Service and Justice Office, said the archdiocese has sponsored more than 3,000 refugees since they started keeping track in the mid-2000s.

Christ Church Cathedral parish council and trustees have supported the development of a partnership with ‘Vancouver Acts,’ an ad hoc ecumenical and interfaith group committed to refugee resettlement.

Canyon Heights Church in North Vancouver has been working on a Syrian Refugee Project for some time now. We told some of the story here.

Canadian Memorial United Church is putting on a fundraising concert in an effort to reunite a Syrian refugee family with their family here in Vancouver. Songs for Syria will be a musical afternoon featuring the Olson Family Singers November 15.

Rev. Michael McGee, chair of the Anglican Diocese of New Westminster’s Refugee Unit, led an information session October 8, focusing on how to sponsor refugees. St. David’s in Delta recently brought in a refugee family from Iraq; other parishes are interested as well.

First Christian Reformed Church is looking forward to ISSofBC’s new Welcome House, due to open next spring right next door to them on Victoria Drive. The exact nature of the relationship is yet to be determined, but Chris Friesen recently thanked pastors Julia and Trevor Vanderveen (and a few volunteers) for their random act of kindness – a hamburger barbecue for 60 construction workers on the site.

What can we do to help?

This set of guidelines was handed out at the Royal Oak meeting:

1. Grieve the tragedy and our complicity. Until we weep, the tragedy will only be a news item, and refugees will remain a statistic.

2. Pray. For refugees everywhere, for ourselves and for the action we take: cryoutnow.org / thesyriancircle.com

4. Think and act worldwide. Refugees are on the move, and our responsiveness must include supporting partner agencies and churches around the world. Churches and organizations oversees are strongly engaged. Walk beside them in the good work they do.

6. Rally with like-minded people. Find people in your congregation/community who share your concern, meet together: the unbelievable can be birthed from a common vision.

7. Share your wealth. Yes, it takes money, time and resources to help refugees, but it’s not cost, it’s investment in what’s right. Be generous.

9. Welcome spaciously. Assumptions about what refugees need may not be accurate. They have their own histories, longings, dreams. Listen carefully, act attentively, advocate.

10. Check the integrity of your Christian worldview. Is it seamless and consistent regarding refugees? If ships of asylum seekers arrived on Canadian shores – will our hearts, hands and minds be unified in compassion?

11. Resist the security infection. We are susceptible to fear. Our need for security not only paralyzes our imaginations, it oppresses vulnerable refugees. Jesus’ most repeated phrase in the New Testament is: “Do not be afraid.”

12. Be an advocate and influence others. Be a change-maker for the long-haul. Listen carefully, be a voice for refugees.

1 comment for “Refugee response is gaining momentum around Metro Vancouver”