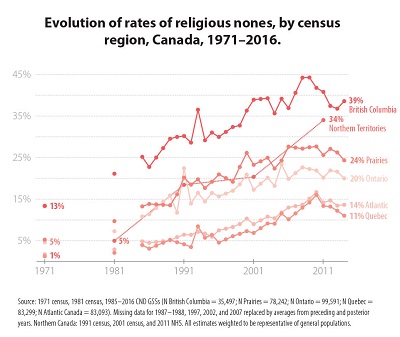 Joel Thiessen wrote this piece for The Christian and Missionary Alliance in Canada, building on his recent book None of the Above.

‘Religious nones’ – those who say they have no religion – are the fastest growing ‘religious group’ in Canada, along with many other modern Western nations.

As you might imagine, regional variations exist. Nearly 40 percent of those in British Columbia say they have no religion, followed by 34 percent in the Northern Territories, one-quarter in the Prairies (led by Alberta), one-fifth of those in Ontario, 14 percent in the Maritimes, and 11 percent in Quebec. 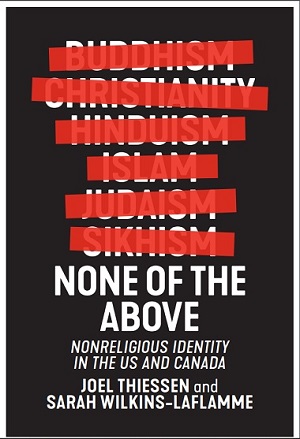 I recently co-authored a book on religious nones with Dr. Sarah Wilkins-Laflamme (University of Waterloo) for New York University Press – None of the Above: Nonreligious Identity in the US and Canada. In our book we explore who religious nones are, why and where they are growing, and what impact they are having on today’s societal and political trends.

I am interested in this topic both as a sociologist of religion and as someone deeply committed to my Christian faith and the local church.

As a social scientist, I maintain that data matters and tells us something about social reality; data helps to dispel misconceptions and myths that people hold which are not, in fact, true.

And then, theologically and practically, I wonder what the growth of religious nones means for evangelical Christians and congregations especially, with their value for evangelism.

To provide a snapshot of religious nones in Canada, here are seven data-driven findings among many others in our research…

2. Opposition to exclusive religious beliefs and practices as well as the strong fusion between the Christian Right and Conservative politics are leading reasons, among others, for why many have set aside their religious affiliation and involvement. 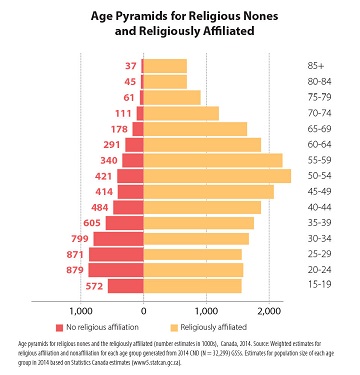 3. There is relatively little social stigma associated with saying that one has no religion in Canada today. The same is not true in the United States, particularly in evangelical stronghold states, where religious nones fear ‘coming out’ to their family, friends, neighbours and coworkers.

5. When examining a range of social and moral issues such as abortion, same-sex marriage, women in the workforce, the environment, government aid for the poor, and immigration policy, religious nones are more left-leaning than religious affiliates, especially in regions with higher proportions of religious nones.

7. The vast majority of religious nones are very content with their lives and religiously unaffiliated status; they are not clamouring to turn to God or join a religious group. Strengthened preaching, music or programs do not generally draw in religious nones. Rather, such efforts primarily help to retain those already in congregations or contribute to transfer growth from other churches.

Do these findings surprise you or affirm what you already suspected was the case? For those in local churches, what should you make of these data and possibly do (or not do) in response? I offer three invitations.

First, learn more about religious nones, turning to sound empirical data rather than well-intentioned anecdotes, opinions or platitudes. Akin to missionaries who learn the language and values of another culture when entering new terrain, Canadian churches are in a shifting landscape that warrants careful study.

I beg you, do not live in a world of narratives based on how you wish things were; understand the landscape as it is, and then proceed accordingly.

Second, meaningfully interact with religious nones in your midst and pursue bridge building activities around common interests. Sociological research reveals that our perceptions of others tend to change as a result of our interactions with them.

Too often it seems that evangelical Christians in particular have misguided perceptions of religious nones because of very little interaction with those outside ‘the fold’ – a problematic reality for those who claim to believe in the ‘good news.’

So, are you in relationship with religious nones – family, neighbours or coworkers, perhaps? Listen to and learn from them, on how they view and experience the world. Pay attention to common interests such as caring for the ‘least of these,’ and consider ways to tangibly partner together.

Third, the number one reason a person joins a religious group is because someone personally invites them. Comparatively speaking, evangelicals have a better track record in this regard than other traditions. Still, few religious nones will necessarily be open to such an invitation, but research shows that some are.

I encourage you to be attentive and open to this possibility of inviting someone into a strategic and appropriate next step in their faith journey with the living God. Out of an informed posture on religious nones in Canada, and in the context of relationships that have been mutually nurtured and valued over time, where might an invitation possibly make sense? 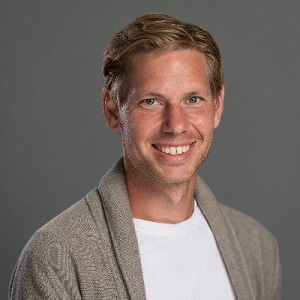 Joel Thiessen is a sociology professor and the director of the Flourishing Congregations Institute at Ambrose University in Calgary.

He has authored or co-authored several books, including None of the Above: Nonreligious Identity in the US and Canada, The Millennial Mosaic: How Pluralism and Choice Are Shaping Canadian Youth and The Future of Canada and The Meaning of Sunday: The Practice of Belief in Secular Age.

This comment is re-posted here by permission of the author.

2 comments for “‘Religious nones’ thrive in BC; thoughts on who they are and how to respond”