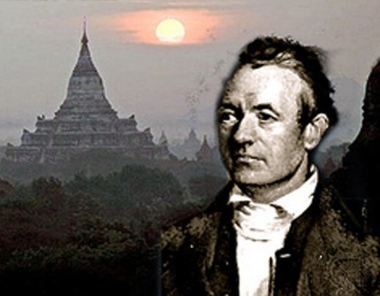 Adoniram Judson translated the Bible in Burma some 200 years ago.

Missions Fest does many things well, and I enjoyed a couple of days touring the booths and listening to speakers again this past weekend. But what I love most are the reminders of our missionary history – and our debt to those early pioneers.

Last year, for example, an Africa Inland Mission representative was good enough to give me a copy of We Felt Like Grasshoppers, which tells the story (warts and all) of the early days of their mission in the middle of Africa. The sacrifices made by those early missionaries are directly related to the massive growth of the African church through the 20th and 21st century. Later in the year, as a follow-up, I read The Daring Heart of David Livingstone, a stirring account of the missionary/explorer’s role in abolishing the East African slave trade.

This year, I heard an Empower Ministries representative speak about the ministry’s role in updating a version of the Bible originally translated by the first missionary to Burma. Ann Brent, director of national ministries for Empower, described the work in this way:

Adoniram Judson, Burma’s first Christian missionary, completed the very first Burmese Bible translation in 1834. Though the translation has been revised over the years, major improvements were needed to create a Bible that could be easily understood by today’s population.

‘Completed the very first Burmese Bible translation in 1834.’ Those simple words barely hint at the vision, toil, privation and perseverance that led to the gospel now being clearly presented in Burma (which is also known as Myanmar). The fact that the Bibles have been printed in China – home to some of the worst persecution of Christians in the history of the world, just decades ago – is amazing in itself.

A handful of biographies have been published over the past few years, celebrating the 200th anniversary of the arrival of America’s first foreign missionaries – Adoniram and Ann Judson – in India (1812) and then Burma (1813). 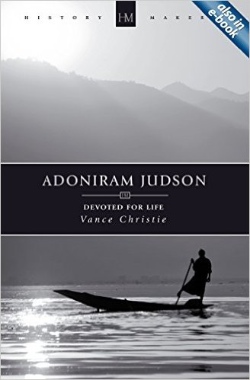 Adoniram Judson: Devoted for Life by Vance Christie covers his whole life; here is a portion of a letter home (written in 1816, exactly 200 years ago) quoted in the book:

I am beginning to translate the New Testament, being extremely anxious to get some parts of Scripture, at least, into an intelligible shape, if for no other purpose than to read, as occasion offers to the Burmans I meet with.

Judson had already begun compiling notes for a Burmese grammar, and then began to learn Pali, the language employed by Burman scholars for their sacred writings.

Life was not easy for the young missionary couple, though it was full of new experiences. Not long after Judson wrote the letter, his infant son Roger died of a fever. The wife of the Viceroy of Rangoon then invited Adoniram and Ann on an elephant procession into the jungle for their health, in order that their minds “might become cool.” The book catalogues the many ups and downs of early missionary life. 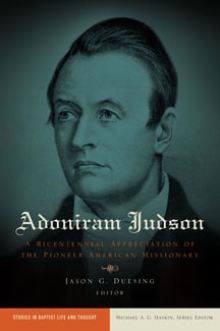 More than a story of a missionary, this work is a confrontation with mediocre Christianity, a clashing of the 21st century American church with the sacrificial living of its forebears. It is the story of a real man with real problems, real struggles and a Great Commission drivenness. Read it. Be challenged. Hear the cry of nations that to this day remain in darkness.

Following is a brief excerpt from the book:

As their language skills improved, the Judsons began evangelizing the Burmans. Adoniram adopted a contextual approach to evangelism by dressing and acting like the Buddhist teachers in Rangoon. Following the latter’s habit, Adoniram erected a zayat – a small open air awning built upon four posts.

Like the Buddhist teachers, he would sit upon the front porch of the zayat and call out, “Ho! Everyone that thirsteth for knowledge!” He would then talk about the Christian faith with any interested seekers. Later missionaries in Burma adopted the same approach.

For her part, Ann concentrated on private conversations with Burmese women, a weekly prayer meeting with interested women and . . . operating a school for children. This became the paradigm for many missionary wives during the 19th century. 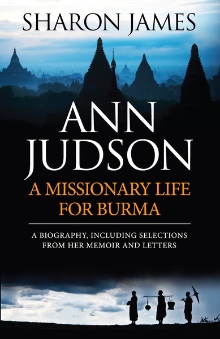 Ann Judson: A Missionary Life for Burma by Sharon James was republished in 2015. The following portion – written to her sisters at the end of 1815 – relates to the challenges of learning the language and of gaining converts:

Mr. Judson has obtained a tolerable knowledge of the construction of the language, and only needs time and practice to make it perfectly familiar. I can read and write, but am far behind Mr. J. in this part, though in conversation I am his equal.

Doubtless you expect by this time, that some of the Burmans have embraced the Christian religion, or at least, are seriously inquiring respecting it. Our hopes have frequently been raised by the serious and candid attention of some, but have as frequently sunk again by beholding their almost total indifference.

Burma, unlike large swathes of Asia, Africa and Latin America, is by no means a stronghold of Christianity. But missionaries like Ann and Adoniram Judson (she died in 1826, her health damaged during a war between Britain and Burma, and he died in 1850) spent their lives introducing the gospel and are directly responsible, under God’s guidance, for the impressive worldwide expansion of the Christian faith over the past couple of centuries.