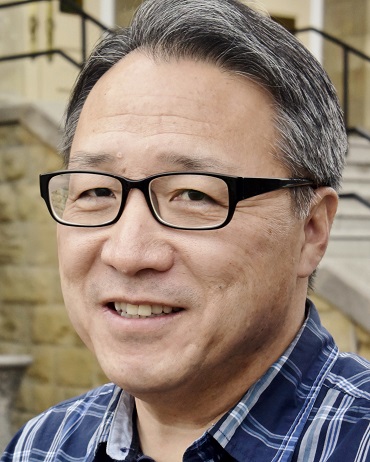 Victor Kim, minister of Richmond Presbyterian Church, felt the Christian community should respond in unity against the racist flyers.

Church leaders in Richmond are encouraging their members and people from the broader community to join them at noon this Friday (December 9) at the Richmond Library to demonstrate unity in the face of anti-Chinese flyers being distributed in their community.

Victor Kim and 16 other ministers have also written an open letter to express their concerns (see below).

In a December 5 Vancouver Sun article, Kim – who described himself as an anglophone Canadian of Korean heritage serving a mostly-white congregation (Richmond Presbyterian Church) – explained why he had taken the initiative. Here is part of the article:

[Kim] and the others – a spectrum of liberal and evangelical Christians – resolved to pen the letter when a new round of flyers came out at the end of November. “It seemed to be growing. I emailed my colleagues saying we should do something as faith leaders.”

Richmond RCMP have said they are investigating the circulation of the flyers, and have consulted with the BC hate crime team. Police say the flyers were distributed by anti-immigration group Immigration Watch Canada.

Friday’s rally will feature speakers and music, Kim said. “We’re also inviting other faith traditions in the Richmond community. Invitations have gone out to people from the Buddhist, the Muslim, the Jewish, Sikh and other communities.

“This is a time where how we respond to things like these flyers will be a good example to set for the Lower Mainland and all of Canada.” 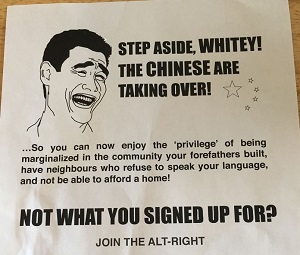 Recently our City of Richmond has been tainted by the introduction of racist flyers that target a particular group of people and encourage a division that does not reflect our community.

Using words like ‘alt-right,’ those who produce and distribute these flyers have no doubt been encouraged by the recent U.S. election and the open bigotry and racism expressed there. But as Canadians, we should not abandon the filters that keep us from doing and saying things that threaten the social cohesiveness of our society.

As people of faith, we believe that every person is created in the image of their Creator, of God, in whom is perfect love. As such creations, all people are deserving of dignity and respect and we celebrate that unity in the midst of our diversity.

We do not deny that there are serious challenges that face us as communities and as a city. These challenges, including affordability, rising costs of living, increased homelessness and the growing gap between the richest and the poorest are real and valid and need to be addressed thoughtfully, carefully and consistently.

But we must address these challenges together, utilizing all our gifts and abilities, not by driving people apart and scapegoating segments of our community. Working together, we can live as an example to others as a community that is rooted in love, not fear, who believe in God’s abundance, not scarcity, who support a politics of inclusion, not identity, united in our welcome for all who desire to call our city home.

In this season of Advent, into a world riddled by fear and darkness, Christians believe that God sent God’s son, Jesus Christ, as the light that shines in the darkness, that the darkness did not overcome.

We encourage the people of our community, our City of Richmond, to live as lights that shine in the darkness of racism and fear, and to live with hope, peace, joy and love, for all people.