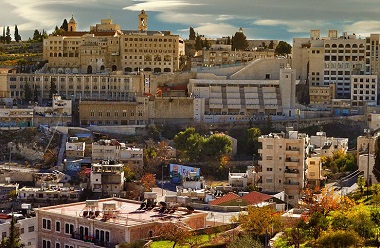 A part of the Christmas story tells how the Holy Family fled Bethlehem, warned in a dream of the vengeful plans of a mad monarch. In recent years, Christians have once again found cause to flee the town of his birth.

Over the past two decades, the accelerating decline of Christian communities in the Middle East has become a growing crisis for Christians and for the future of pluralism in that part of the world.

In 2010, the Vatican hosted a Special Assembly of the Synod of Bishops for the Middle East, reflecting Benedict XVI’s particular concern “to confirm and strengthen Christians in their identity” and to encourage them to renew their commitment to the region.

In September 2014, a citizen-led initiative convened a conference of Middle Eastern and Western leaders in Washington, DC, aimed at mobilizing public policy in defence of Christians in the region.

Palestinian Christians post enticements to their coreligionists to remain in the land.

Nevertheless, the plight of Christians throughout the region has only grown increasingly dire, highlighted most dramatically in the genocidal acts of the so-called Islamic State driving the greater majority of Iraq’s remaining Christians into internal and external exile.

A focal point of the concern over Christian emigration is the small and dwindling community of Christians among the Palestinians living in the West Bank and Israel. Christians have remained in the biblical Holy Land since the days of Jesus Christ himself.

Their relative numbers have declined gradually over the centuries, a decline that accelerated significantly after the end of the colonial period and the wars that followed the establishment of the state of Israel in 1948.

As the Oslo Peace Process fell apart amid the failure of the Camp David II negotiations in 2000 and the descent into the second intifada, Christians began to leave en masse. Today, the remnant lives clustered around the most important Christian holy sites in Nazareth, Jerusalem, and Bethlehem. 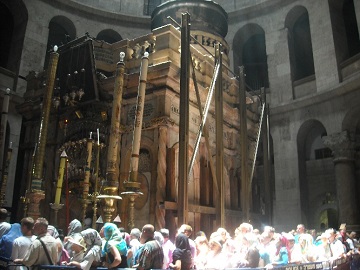 Tourists continue to flock to the Christian shrines in the Holy Land (as here at the Church of the Holy Sepulchre). But how long will there remain indigenous Christians to maintain them? Photo credit: Paul Rowe.

A continuing Christian presence in this region remains a high priority for many Christian groups. However, the politicization of the Arab Christian minority, caught between the reflexive pro-Israel perspective of many Western (and increasingly, many African and Asian) Christians and their own desire to speak truth to Israeli power, has made it next to impossible to find a unified political voice.

Several years ago, a controversy over the proposed construction of a mosque in the area of the Church of the Annunciation in Nazareth pitted the Islamist movement against the Christians.

More recently, the Israeli Defense Forces have actively sought to recruit soldiers among the Christian population, an effort that threatens to isolate Christians from their Muslim compatriots who wouldn’t volunteer to serve in the military.

In Jerusalem, a large proportion of the Christian community faces the uncertainty of their status as residents without citizenship. These Palestinians must remain residents of the city or lose their ability to travel back and forth between Israel and the occupied territories.

In the West Bank and Gaza Strip, the plight of Christians is even more dramatic, as the economic and social oppression of living under occupation has made life very difficult. Gaza has only a very small population of Christians, marginalized by the Hamas-led administration and victimized by violent Israeli incursions. The ruin of the Palestinian economy in the West Bank disproportionately affects the more prosperous Christian community.

The construction of the so-called security barrier has a direct impact on the small but vital Christian community of Bethlehem, where the barrier takes the form of an eight-metre high concrete wall that casts a shadow on numerous Christian homes and businesses.

The limitation and reduction of international tourism that arose after the second intifada brings fewer foreigners to the shops, inns and restaurants of Bethlehem. The isolation of the Palestinians within Areas A and B of the West Bank has led to internal migration of Muslim communities to the city, increasing the tensions between “native” Bethlehemites and other Palestinians.

In spite of the dramatic decline in the population, Christian civil society organizations (CSOs) are “punching above their weight.” They join a large community of other non-governmental organizations in filling in some of the gaps left by the dysfunctional Palestinian Authority.

Nazareth’s Christians are central players in the continuation of civil society activism based in the city. Christian-led organizations in Bethlehem have spearheaded efforts to bring international tourism back to the city. In Jerusalem, Christians are building bridges with the Messianic Jewish community in an effort to bring seeds of reconciliation to a divided society.

The civil activism of the Palestinian Christian community forms a model for Christian survival throughout the Middle East. As a small minority, Arab Christians are typically unable to effect direct change through democratization.

In both more and less democratic societies, their churches and parachurch organizations form the sanctuary of the Christian community, a sanctuary often opened wide to care for non-Christians as well. Civil initiatives have provided a feeling of efficacy and purpose, and so contribute to the survival of the Christian minority amid severe challenges.

This comment was posted December 14 on the Oxford University Press blog. It is re-posted here by permission.

Paul Rowe is Professor and Coordinator of Political and International Studies at Trinity Western University and senior research fellow in the Religion, Culture and Conflict Research Group. Rowe completed his PhD at McGill University in 2003, where his dissertation focused upon the politics of Christian minority communities in Middle Eastern states. He is the author of Religion and Global Politics (OUP Canada, 2012) and co-editor of Christians and the Middle East Conflict (Routledge, 2014).

He has spent extended time in the Middle East and continues to study the politics of religious groups in developing countries and at the global level. His article The Open Sanctuary: Palestinian Christian Civil Society Organizations and the Survival of the Christian Minority in Israel-Palestine was recently published in OUP’s Journal of Church and State.

← Richmond pastors wrote open letter, plan rally to reject racist flyers
Garratts glad to be free – but would still love to be in China →