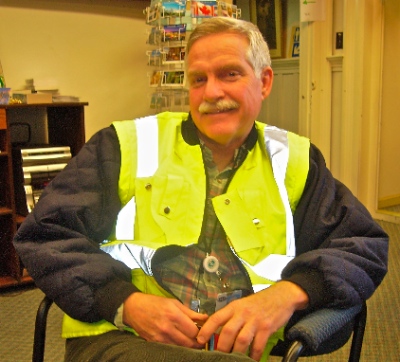 The sailors from other lands who show up at the Port of Vancouver’s Flying Angel Club know it as a Christian mission to seafarers. But in the few hours they have ashore, their usual reason for going there is to get on Skype so they can see and talk to their families back home.

Yet sometimes faith and family combine, such as when Typhoon Haiyan struck the Philippines in November.

“It was just me and 18 Filipinos,” says club secretary Kathryn Murray. “We were watching the live feed of the storm coming in on a cell phone. All of a sudden the phone went black.

“You could’ve heard a pin drop. The men were all clutching each other. We prayed for everybody’s families. They left here not knowing if their families were dead or alive.”

But there are also many joyful moments.

“I had a man run up the stairs three at a time breathlessly saying, ‘Must see Skype. New baby. Now!’ I thought it was an emergency,” says senior port chaplain Nick Parker. “And here he is just so hyped to get this first opportunity, because ships don’t get Skype.” 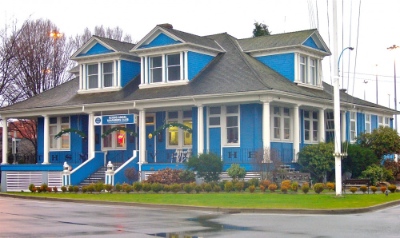 The Flying Angel Club is housed in a heritage building on the Vancouver waterfront, two blocks east of the foot of Main Street. Photo by Frank Stirk.

The Flying Angel Club – the name comes from Revelation 14:6 – is one of 250 stations around the world run by The Mission to Seafarers that offer men and women away from home for often months at a time a brief respite from the sea.

“You’re lonely, you’re scared, you’re tired, you’re bored – and you’re always in a strange place with none of the support network around you,” says Parker. “That’s why places like this exist.”

A former naval officer and military chaplain, Parker is an ordained Anglican priest. He works with two other chaplains, one Roman Catholic and the other Christian Reformed.

About 5,000 sailors visit the club each year. Parker estimates about 60 per cent are Filipino, and of these about 90 per cent are Catholic.

Just 30 years ago, it was a much busier place. But container shipping reduced the number of sailors needed on board a vessel by about half. Ships are also now able to unload and load their cargos and head out again in just 18 hours. That allows crews only a few hours of shore leave, if any.

The club used to hold regular Sunday evening services, but those were cancelled as the numbers dwindled. Now, when asked, the chaplains will hold services on board ships.

But while some aspects of its faith component have changed with the times, the seafarers know the welcome awaiting them remains the same.

“For us, it’s dignity, inclusion and fair treatment,” says Parker. “They know we do what we do because of our faith stance. We’re here to help in whatever capacity.”

But they do not try to win converts. “We function out of the compassion that we experience of Christ,” he says. “We attempt to just love the individual and let that stand for itself.”

Younger sailors also often find it easier to talk to Murray, because they feel more comfortable confiding in an older woman. Many even call her “mom” or “mother.”

“If they’re going to Somalia, for instance, there’ll be a lot of fear because there’s a chance pirates will get them,” she says. “It always makes them feel good that I say, ‘I want to know that you’re okay.’ And I do get text messages: ‘Mother, we’re safe.’”