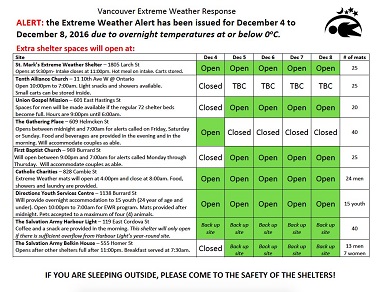 Most of the Extreme Weather Shelters in Vancouver are found in churches or Christian ministries.

As we hunker down for another round of snow, it is encouraging to know that the Salvation Army, Union Gospel Mission and several churches are playing a major role in providing Extreme Weather Shelter for many homeless people.

The City of Vancouver announced October 25 that 190 beds would become available at six temporary winter shelter locations in Vancouver. Included were 70 beds at two Salvation Army sites on Cordova Street in the Downtown Eastside. 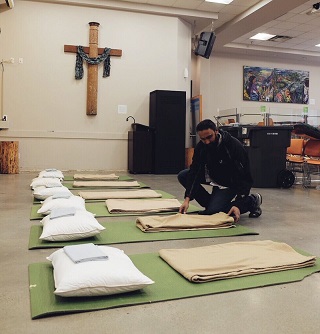 UGM will add up to 20 mats on top of their 72 regular beds following an Extreme Weather Alert.

He said UGM offers 72 proper beds all year, but following an Extreme Weather Alert up to 20 extra mats with sheets and blankets are added.

Quinn asked whether there are there enough spaces for everyone:

It really depends on the night. Unfortunately, we know that the demand for shelter spaces across Vancouver is usually much higher than the spaces that are offered. So it’s great that we have probably north of 140 additional beds, just because of the Extreme Weather Alert that’s been called, and that’s on top of about 190 Winter Shelter Spaces that were opened earlier in the fall. And that is on top of the give or take 1,000 that are permanently available in Vancouver.

However, add those numbers up, we know through the homeless count that 1,847 people were identified as being homeless, so do the math and we’re several hundred short still. So it’s going to be a cold night for a lot of people.

What supports are available for those left out on street?:

That’s a real tragic situation, so we’ve got to get creative. What we’ve been doing – same as Lookout [his fellow guest was Keir MacDonald, deputy executive director for the Lookout Society] – is preparing for several months for this. We have been strategically going out to places where we know people are staying who don’t typically go into shelters, under bridges and parks, that sort of thing, and we’ve been giving them survival gear.

This Global News video shows how UGM has partnered with Citypak to provide special backpacks to Vancouver’s homeless population.

We’re talking legitimate survival gear, things like heat reflective blankets, sleeping bags, heat reflective tarps, long underwear, back packs, toques, mittens, jackets, boots. We try and do whatever we can to make sure that if people aren’t going to be inside, they’re at least going to have the basic survival gear, because let’s not kid ourselves, it is dangerous out there.

This is a serious matter for a lot of people, and especially because a lot of people who are already vulnerable aren’t ready for snow; they haven’t seen this for more than two years. This is a rude awakening and it’s really quite concerning, so that’s why we take these extra measures to do whatever we can to make sure that people are safe.

Both guests agreed that more housing is the key to solving the problem. Hunka said:

Housing, housing, housing. These shelter spaces are needed, they’re critical, but we are not going to solve all homelessness and these people are still going to be on the streets unless we get housing.

The Non-profit Housing Association, I believe, came up with the number that we need about 3,000 affordable housing units every year, just to keep pace with the need that continues to grow in Metro Vancouver. Until we get that, it’s going to be, quite frankly, really tough for a lot of people who are just like you and I.

To hear the whole conversation go here, starting at 1:43. For a list of Extreme Weather Shelters around the province go here.

← ReImagine Vancouver: Be a life-giving presence in your neighbourhood
Mary’s Song ever new: God has brought down rulers and exalted the humble →