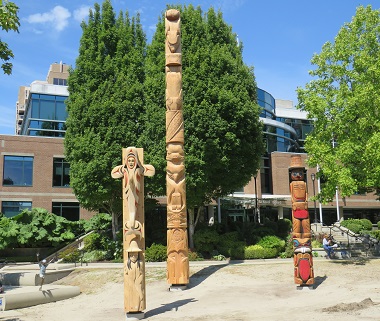 These three poles were unveiled in front of the Vancouver School Board June 21.

The public school system is often seen as an unwelcome place for religious practices, and with good reason. The Vancouver School Board (VSB) reminds us in its Administrative Procedures Manual that “The School Act [Section 76] states that schools “must be conducted on strictly secular and non-sectarian principles.” (Go to the end of this article to see how the VSB fleshes out that statement.)

However, the recent celebration of three carved Indigenous poles right in front of the School Board offices shows how open to spirituality the system can be, when it comes in certain forms.

And that can be seen as good news for the Christian community, as long as our responses are creative and persevering.

More than 1,000 school kids, district staff and First Nations representatives convened at the Vancouver School Board (VSB) office Friday [June 21] for the unveiling of three massive welcome posts carved by members of the Squamish and Musqueam First Nations. 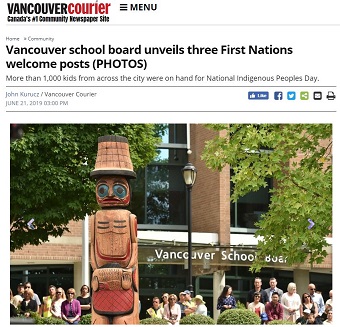 Work on the three posts began in February and wrapped up earlier this month. The centrepiece is a 44-foot reconciliation post carved by Squamish nation members James Harry and his father Xwalacktun [Rick], while a 22-foot female welcome figure was carved by brother-sister duo Chrystal and Chris Sparrow of the Musqueam Indian band. The third post, also 22 feet in height, is a welcome post carved by Musqueam member William Dan.

A news release from the VSB highlighted elements of the Legacy Carving Project which would fit nicely within a ‘secular and non-sectarian’ framework.

“With the installation of these three poles we acknowledge the important role that indigenous culture plays in this District,” says Suzanne Hoffman, Vancouver School District Superintendent. “They symbolize decolonizing the grounds of the Education Centre and act as a physical reminder to the District’s commitment to truth and reconciliation.”

The intent of the 44-foot reconciliation pole is to unite everyone – nə́c̓aʔmat ct / ‘we are one’ – as we continue to learn and understand what reconciliation means in education. Placing the two welcome figures, one male and one female, recognizes the balance of both genders also reflects the District’s commitment to equity and inclusion.

“I am humbled and honoured that the two welcome figures and reconciliation pole stand before the Education Centre, where the Board makes its decisions” says Janet Fraser, Vancouver School District Board Chair. “It is one of our priorities to increase our District’s understanding of Indigenous culture as education is key to implementing the TRC recommendations.”

During the carving process, over 1,500 students throughout the District visited the artists and learned about the carving process, the significance of the symbols on the poles and the meaning behind the Truth and Reconciliation Commission: Calls to Action and the United Nations Declaration on the Rights of Indigenous Peoples.

Sounds good – but even a cursory consideration of the event reveals that the poles themselves, and the accompanying ceremony, could not properly be described as ‘secular.’

The symbols on the Reconciliation Pole from top to bottom are displayed as follows:

The first idea that came to mind was that the Creator (the Great Spirit), represented through the Thunderbird, is on the top coming down fast. It is leaning and diving quickly with its wings folded behind it. The wings transform into hands, and they hold onto Mother Earth, which is being guarded from harm.

During the process, the earth carving actually got a crack in the cedar. I believe it is the Creator showing us what is happening to the world. The Creator is coming down fast to send us a message that we need to do something immediately to make changes. The Creator is telling us that we all need to come together to make positive change in the world so we can move forward as human beings. . . .

Go here for the full piece.

Here is how the Chanupa Ceremony is described:

Chanupa Ceremony is a sacred pipe ceremony for connecting physical and spiritual worlds. Chanupa means pipe where sacred medicine in Indigenous culture is smoked. The pipe serves as many things for many nations, including a way to pray and bless, to open and close spaces, rites and initiation points, to discuss terms of peace or war. It is a tool to mediate between the worlds, between ideas and people.

The pipe represents our prayers in physical form. Smoke becomes our words as it goes out, touches everything and becomes a part of all there is. This ceremony is one of the closest ways’ humans will speak and listen to the Creator and all the helpers.

The fire in the pipe is the same fire in the sun, which is the source of life. The reason why tobacco is used to connect the worlds is that the plant’s roots go deep into the earth, and its smoke rises high into the next world.

Go here for a full description of the Indigenous Protocols. 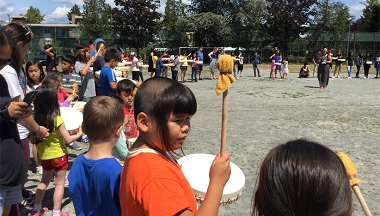 Children preparing for the unveiling ceremony for the Legacy Carving project. Photo from VSB site.

One might argue that this is a one-time event, not representative of what is going on in classrooms. But another page posted just before the event – Drumming to the Beat of Our Hearts – shows that is not the case.

Here is a portion of the write-up:

For Indigenous people, the circular shape of a drum represents balance and equality, wholeness and connection. All living things surround the drum, with the Creator at the centre. The rhythm of the drum symbolizes our heartbeat and when we drum it strengthens our connection to each other.

Over the last five years more than 1,000 drums were made by students from kindergarten to grade 12. More than 1,001 students will be using these drums to perform the Coast Salish Anthem on June 21 at the unveiling ceremony for the Legacy Carving project. 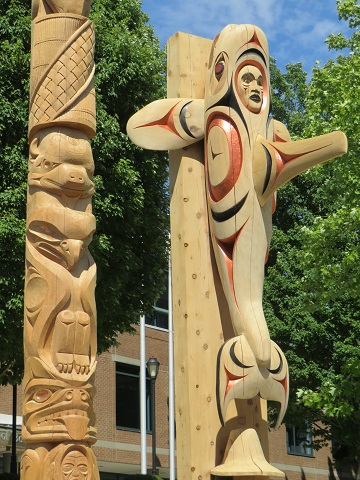 It would also be fair to point out that events such as the unveiling of the Legacy Carving Project – and student participation in Indigenous practices – do not indicate a change of heart on the part of secularists in the school system.

Christianity and its symbols are rejected because they are, or have been, powerful in our culture. That is, Christianity is still seen as a threat to the now-dominant secularist ideology.

If Christians do manage to gain a hearing, it would probably be because they are perceived to be weak enough not to worry secular leaders – who on the other hand tend to treat Indigenous beliefs as ‘simply’ cultural, and thus not threatening.

That line of thinking would be understandable, but possibly a bit pessimistic.

The VSB seems entirely sincere in its approach to Indigenous cultures, rightly wanting to respond to colonial wrongs – though possibly naive about the spiritual elements of those cultures. Or maybe they’re simply more sympathetic to it than to Christianity, with its creeds and doctrines. Indigenous spirituality seems to suit the spirit of the age in Vancouver, when so many of our citizens consider themselves ‘spiritual but not religious’ and have a very high view of our natural surroundings.

Nonetheless, perhaps Christians can legitimately expect to gain a more sympathetic hearing for their views and practices within the public school system, if not from die-hard secularists, then from others in our increasingly diverse culture.

The Vancouver School Board has welcomed a deeply non-secular cultural expression onto its very doorstep. As Christians interact with the VSB in future, should they not be able to receive an equally warm welcome?

Crosses on the front lawn are unlikely (and not likely to be requested). A respectful recognition of the value of our Christian heritage and the importance of interplay between sacred and secular to our daily lives would suffice.

Who knows, maybe the time will even come when we can question why schools must be conducted on “strictly secular and non-sectarian principles.” The latter seems legitimate, in a system which must cater to all religions and creeds. But the former does not.

After all, there is no official separation of church and state in Canada, as is made clear by the preamble to the Canadian Charter of Rights and Freedoms: “Whereas Canada is founded upon principles that recognize the supremacy of God and the rule of law . . .”

The School Act states that schools “must be conducted on strictly secular and non-sectarian principles. The highest morality must be inculcated, but no religious dogma or creed is to be taught.” However, the District believes it must not prevent teachers from exploring with students the contribution that religious values and beliefs have made to the social, cultural and historical development of civilizations.

While religious writings provided by outside groups shall neither be advertised nor distributed to students, objective discussion of world religions as they relate to aspects of prescribed, authorized and locally-developed curriculum are permitted in District schools.

1. Comparative religious studies, guest speakers or multi-cultural field trips and school activities approved by the Principal are acceptable as part of the program of learning activities.
2. Copies of religious works are deemed appropriate for school library reference collections.
3. No endorsement or diminution of any one belief or religious tenet over another shall be made by staff members in educating students to be tolerant and respectful of religious diversity.
4. Events and activities, as differentiated from writings, determined by the Principal to be of interest to students and families but which are sponsored or organized by religious groups may be reported in school announcements. Thereby activities such as brownies, guides, cubs, scouts, summer camps or daycare/preschools are drawn to the attention of families as a public service.
5. Voluntarily attended activities which inform, but do not recruit or indoctrinate students may be held on  school premises outside of regular instructional hours, as determined by the Principal in consultation with the Director of Instruction.
6. The District will rent school facilities to religious groups for use outside of school hours according to District procedures.