National Geographic magazine profiled children with albinism and the work of Under the Same Sun in June.

There have been a couple of interesting connections between National Geographic and Vancouver over the last month or two.

Peter Ash: Under the Same Sun

The June issue of National Geographic magazine featured The Perils of Pale, which stated: “For them [people born with albinism in sub-Saharan Africa], being pale can bring scorn, threats and worse.”

Detailed, gruesome records are kept by Under the Same Sun, a nonprofit organization working to end discrimination against those with albinism. Since the 1990s, in 27 African countries, at least 190 people have been killed and 300 attacked, most since 2008. The epicenter of this crime wave, which includes the robbing of graves, is Tanzania. . . .

It carries on to describe the lives of Emmanuel Festo (Emma) and Miriamu Staford:

Emma’s secure schooling and Staford’s caregiver are paid for by Under the Same Sun, founded by wealthy Canadian businessman Peter Ash. From his commercial real estate business based in Vancouver, he and his wife contribute about a million dollars each year to the nonprofit’s $1.5 million budget.

Ash is almost certainly the foremost advocate for people with albinism. He persuaded the United Nations to name June 13 as International Albinism Awareness Day and to appoint a UN expert, who traveled to Malawi and Mozambique last year as attacks there soared.

You can get a free link to The Perils of Pale (and a chance to win a one-year free subscription to National Geographic) here. 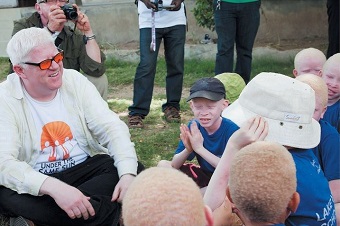 Peter Ash with some of the kids with albinism that UTSS is helping.

When Peter Ash heard these stories [about albinism] in a BBC documentary from his Vancouver home in 2008, he saw brothers and sisters dying. The pastor-turned businessman has albinism. Ash founded Under the Same Sun (UTSS) in 2009. The Christian humanitarian organization uses education and advocacy to end discrimination against people with albinism.

UTSS pays for children to attend English-immersion private schools and post-secondary institutions. Children with albinism often don’t attend school. Previously some were sent to government-run schools for the blind for their safety. These schools were “overcrowded refugee camps,” says Ash. . . .

Increasingly Ash hears of communities protecting people from attacks, and children with albinism excelling in school and having hope for the future. It’s “always a mixture of sadness and hope,” he says. “But mainly I have hope now.” 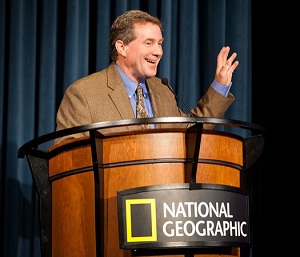 Wildlife photographer Joel Sartore spoke at A Rocha’s Barn Raiser May 25. He has 30 National Geographic stories to his credit and has dedicated his life to raising awareness for conservation efforts through his candid and humorous photographic style.

Karin Boisclair-Joly wrote about his visit:

When Joel Sartore accepted A Rocha’s invitation to be keynote speaker at May’s Barn Raiser Gala – the public launch of our campaign for Brooksdale – neither knew it would be love at first sight!

A world-renowned wildlife photographer, Joel is 12 years (and half-way) into his master work, the Photo Ark. He is capturing the portraits of 12,000 animals: an astonishing contribution to the conservation of Earth’s species. Joel aims to document every species living in wildlife sanctuaries and reserves around the world, inspiring action – through education – to help save wildlife. Most of his ‘shoots’ are at zoos and focus on just one or two species per visit.

To his delight, with one overnight at Brooksdale his tally shot up by 38 species: an unprecedented experience. This was Joel’s first time working with naturalists who can collect everyday creatures and identify their common and scientific names. He was thrilled! Joel’s perspective is that all animals have value and deserve their moment of fame. Soberingly, it’s always at the back of his mind that the common species of 2017 may be endangered within a century.

In the beautiful setting of Brooksdale’s heritage barn – our future Conservation Learning Centre – he photographed 24 species in an eight-hour session. The next morning at Trinity Western University provided him with 14 more species. 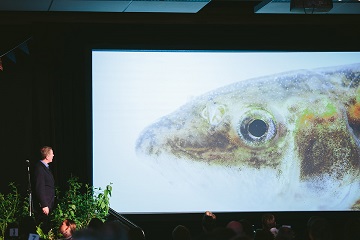 Joel Sartore with his photograph of a Salish Sucker, at the A Rocha Barn Raiser.

While he was excited by humble species like the European earwig (Forficula auricularia) and the Twice-stabbed stink bug (Cosmopepla lintneriana) which (strangely?) hadn’t yet been added to his database, we were delighted with gorgeous photos of critical species from the Little Campbell watershed, including the Salish sucker (Catostomus Cf. catostomus) and the Oregon forestsnail (Allogona townsendiana).

Funded in part by National Geographic and Harbers Foundation (whose kind support enabled us to invite him), Joel’s own speaking engagements help to keep the Photo Ark afloat. He is a compelling speaker, deftly moving the 300 participants of the Barn Raiser between hilarity, wonder, and sombre reflection, while showing hundreds of astounding portraits of animals he’s photographed around the world, now including our dear Salish sucker.

Although Joel is the photographic equivalent of a rock star and A Rocha is really quite a humble entity, it was a wonderful collaboration and we may just all have a twinkle in our eye for a ‘next time’!

This article is re-posted by permission from the A Rocha Canada site. Go here to see some of the photographs Karin is referring to.