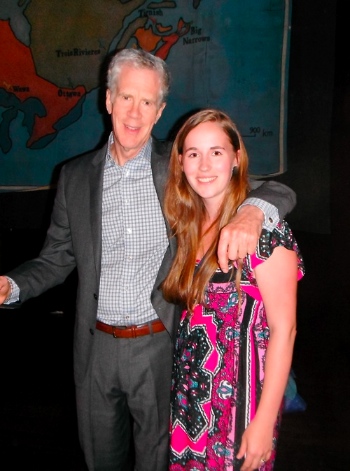 Vinyl Cafe host Stuart McLean with Mindy Ogden at the reading of her story in September 2012.

Stuart McLean hosts The Vinyl Cafe on CBC Radio. His latest book – Time Now For the Vinyl Cafe Story Exchange – features his favourite stories from a decade of his show. And one of those stories is by Mindy Ogden.

I’m writing to tell you about an experience I had riding public transit in Vancouver.

I was on my way home from returning textbooks to the library downtown. I boarded the SkyTrain and settled in for my 45 minute train ride. I stared out the window and zoned out for the next few stations, following the social norm of avoiding eye contact and conversation with strangers.

At the next station, an older man boarded the train. The only available seat was occupied not by a person, but by a knapsack. The gentleman smiled kindly at the young man whose knapsack it was and asked if he wouldn’t mind moving it, so he could have a seat. The young man, a twenty-something wearing a hoodie and over-sized earphones, scowled up at the man and swore loudly.

The entire car went dead silent. The old man was so taken aback that he was speechless. He turned and walked to the other side of the car. And though most of us were cursing the young man in our heads, we – none of us – said anything aloud. After all, it was none of our business – we were just chance observers of an altercation that didn’t involve us. But then, a third man, probably 35 or so, stood up. 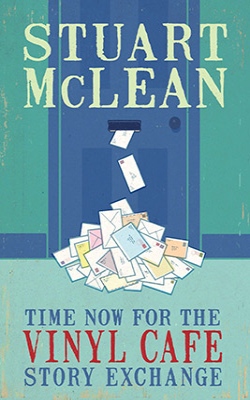 “Excuse me?!” he said, as though the affront had been his.

The young man pulled his headphones down to his neck. “You talking to me?”

“Yes, I am talking to you. That is no way to treat a fellow human being. You should apologize.”

The young man insisted that he was not going to apologize. Rudely. Apparently the F-word was frequent in his vocabulary – now he’d used it as both a verb and an adjective.

So, Mr. thirty-something reached right over Mr. twenty-something’s head and clicked on the SkyTrain emergency intercom.

There was static and then – “Hello, what seems to be the problem?”

He answered that there was a young man aboard the train, who had just threatened an older gentleman.

The voice over the intercom promised to dispatch the SkyTrain police to meet the train at the next station. It then asked for a description.

The young man sat bolt upright. His ears were burning pink. He looked around the train car. All eyes met his. When the train pulled into the next station, he jumped onto his feet, snatched up his knapsack and darted out of the train car.

Mr. thirty-something sat back down. The older man thanked him and took a seat. It seemed like the entire train car let out a communal sigh of relief. We were all smiling, giving each other knowing glances and commenting on the episode to one another, as if we were old friends.

A woman turned to Mr. thirty-something, pointed to the yellow band under the window and said, “You know, there are silent alarms.”

“Oh, I know about the silent alarms. But you see, it was public humiliation I was going for.”

And that was that: One man taking SkyTrain morality into his own hands. One man willing to stand up for what was right, when the rest of us remained silent. He renewed my faith in humanity that day. And I’m sure that wherever that young man is now, the next time someone asks him to move his knapsack, he will do so.

Stuart McLean writes and hosts the popular CBC Radio show The Vinyl Cafe. He is the author of many bestselling and award-winning books, including six collections of Vinyl Cafe stories.

Mindy Ogden lives with her husband and daughter in New Westminster and is finishing off an MA in Anthropology at UBC. She attends New Life Community Church in Burnaby.