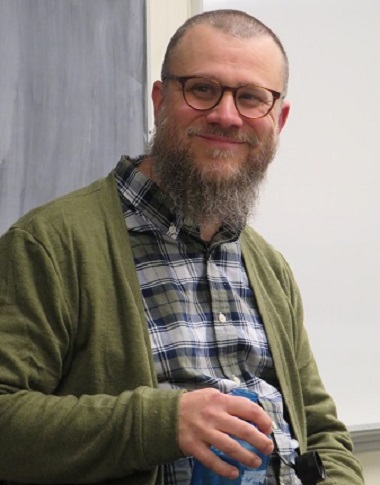 Chris Smith drew on several areas of expertise when he spoke as a guest of Regent Exchange (‘churches for the common good’) last Friday and shared with like-minded friends at Grandview Calvary Baptist Church over the weekend.

He has written several books – Slow Church (with John Pattison), Reading for the Common Good and How the Body of Christ Talks – while living intentionally, and long-term, with his family as part of Englewood Christian Church in Indianapolis and editing the Englewood Review of Books (ERB).

Following is a reflection by Smith which raises some of the themes he addressed during his time in Vancouver.

I had a chance to read and review theologian Willie Jennings’s commentary on the book of Acts [chosen as Best Commentary Volume for 2017 by the Englewood Review of Books].

Some of you will remember that Jennings gave a powerful lecture as part of the Slow Church conference in 2014 – give it a listen, if you haven’t heard it yet – and this new book uses the stories of the early Christians recorded in Acts to offer a bold and prophetic word for churches today.

I got permission to post one of the most striking passages from this commentary on the ERB website this week, a reflection on the story of Peter in the house of Cornelius (Acts 10-11). I encourage you to read this excerpt as it describes so well the situation that we find ourselves in today.

A few thoughts on the timeliness of these words . . .

In my own words, what Jennings names in this passage is our call to live in the tension between tradition and transformation.

At the risk of oversimplifying, the conservative ideology of the Right is driven largely by its focus on tradition (and CONSERV-ing the convictions and habits of previous generations). And this impulse that values tradition is very important.

“The church from its beginning has rightly grounded its thinking in historical continuity with the word of God registered in, for example, the canon of Scripture, liturgical tradition, testimony and dogma.”

It is tradition that has formed and shaped us, and ordered the world in which we live. We cannot abolish it. “There is also the problem of living oblivious to the past and functioning without any historical consciousness.” Jennings writes. “The church exists only because God has spoken in the past, and without a sense of that history we lack clarity about our current path and journey.”

On the other hand the ideology of the Left is driven largely by its desire for transformation, and of course, this is similarly a healthy desire.

We live in a broken world that is in need God’s healing and transformation, but to rush headlong into transformation may have its own sorts of unintended consequences as we intentionally or unintentionally dismantle the traditions that give form and meaning to our lives along the way. 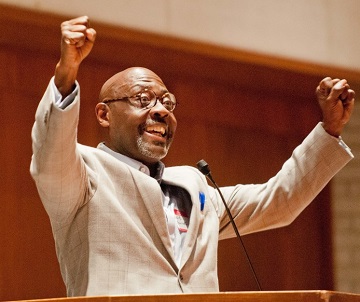 What we need, Jennings implies, is a conversation between tradition and transformation. Both of these impulses are necessary, and they should serve – as they often do in the book of Acts – to clarify one another. But to live in the intersection of the two, Jennings maintains, is a vulnerable place.

“Peter stands before his redeemed kin in utter vulnerability,” he writes (several pages before the reprinted excerpt). “He had no textual witness to fall back on, no prophetic utterances to conjure from the collective memory of his people. The prophets of old did not prepare him for this Gentile emergency.”

Why Slow Church is slow

Jennings, I believe, has stunningly articulated in this excerpt why Slow Church is slow. It would be much more efficient for us to cling unswervingly to tradition or to charge feverishly into transformation, but taken alone to the exclusion of the other, each of these impulses will ultimately destroy us.

It is in our real, embodied communities – and especially our local churches – that we learn to hold these impulses together and to live in the tension between them. I was struck by a story in The Christian Century of how the Princeton Theological Seminary community successfully navigated the tensions around its invitation for Tim Keller to speak on campus, and the relative civility of how the community worked through the tensions in face-to-face interactions on campus, contrasted with online interactions about Princeton’s situation that were volatile and largely unresolved. 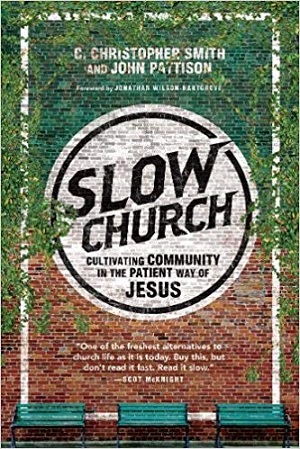 John [Pattison] and I intentionally chose the term Slow Church, not Slow Christianity, or Slow Faith or Slow Religion, etc., precisely because we believe that it is in dogged commitment to the real people of these embodied communities that we learn to navigate the tension between tradition and transformation (and all the other tensions among which we as humankind find ourselves) in ways that bear witness to the transforming love of God at work amidst the history and tradition of a broken world.

In our local churches, we learn to talk together, and to make discernments that honor the traditions we have inherited, and the transforming Word of God that is calling us toward ultimate fulfillment of the new creation that has been established in the life, death, resurrection and ascension of Jesus.

The way of discernment

As David Fitch has argued, for the Church to embrace the ideology of Right or Left is to accept their narrative of fragmentation and thus to reject the scriptural narrative of the reconciliation of all humankind in Christ. The way of discernment that Jennings describes situates us in a space in which the virtues of both tradition and transformation can be heard and applied to the real decisions we must make about the shape of our lives and the shape of our witness.

Amidst the fragmentation of the late modern age, it will not be surprising for local churches to make a variety of seemingly incompatible decisions based on the ways that we hear the chords of tradition and transformation in our midst. We should therefore extend grace to one another, and continue in conversation with other churches locally, and in our denominations, seeking to listen to one another even when we do not agree.

May God have mercy on us all, and may we all have the courage to follow in the way of Jesus, the living and active Word of God!

1 comment for “Slow Church navigates tension between tradition and transformation”