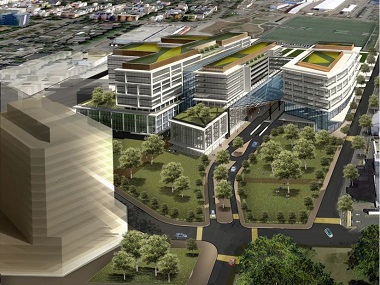 The new St. Paul’s Hospital, due to open in 2026, is described as “a purpose-built, fully-integrated health campus, comprising the entire 18.4-acre site on Station Street in the False Creek Flats.”

As the management and staff of St. Paul’s Hospital look forward to a new home in a new setting, some are remembering its rich history.

An October 7 Vancouver Sun article pointed out that fundraising for the new project is going well:

The St. Paul’s Hospital Foundation has set its sights on raising $225 million toward the cost of a new hospital to be built three kilometres away, on an unused field in the False Creek flats.

With pledges and donations totalling $168 million to date, the foundation is three-quarters of the way to completing what’s been called the largest hospital fundraising campaign in Western Canada. The single largest donation pledge has been $75 million from the Pattison Foundation, the philanthropic arm of Vancouver billionaire Jim Pattison‘s empire.

The health care campus will be called the Jim Pattison Medical Centre.

Others are remembering where St. Paul’s came from. Here is a portion of recent B.C. Catholic interview which focused on the history of Providence Health Care, which operates St. Paul’s and several other medical facilities around Metro Vancouver:

We asked them about the history of health care in Vancouver and the challenges and dreams they’re facing today: 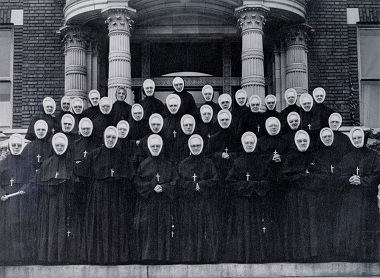 The B.C. Catholic: Catholics have done an incredible amount of good work when it comes to health care in Canada, historically. Many Canadians, even Catholics, are unaware of that. What is a contribution Providence Health Care has made that people might be unaware of?

Fiona Dalton: For the past 125 years, we have done an extraordinary job of delivering on the commitment of the Sisters of Providence to healing the body, mind and soul.

To give just one example, in the 1920s widespread racism prevented Vancouver’s Chinese residents from getting the health care they needed. Responding to an urgent appeal for help, four nuns from the Sisters of the Immaculate Conception arrived from Quebec. They opened a clinic and four-bed infirmary in a little house on Keefer Street, in Vancouver’s Chinatown, and immediately began to treat the neighbourhood’s sick and impoverished residents.

As the community grew, so did the need for more space to provide care. The sisters bought an old sheep farm on Prince Edward Street and set about raising the money to build what would become Mount Saint Joseph Hospital.

Christopher De Bono: What some people may not know about Providence and Catholic health care is that it has always been about meeting the physical, emotional, mental and spiritual healing needs of those who suffer.

Sometimes people confuse “Catholic” or “faith-based” with some other motivation, such as proselytization. But nothing could be further from the truth. What has always been true at Providence is that the human person matters. Our work with populations who might experience feelings of being marginalized is just one example of how Providence always seeks to help those who are disenfranchised. 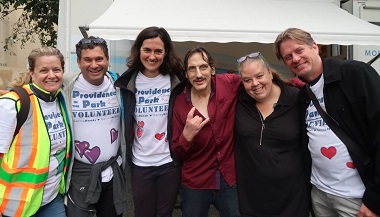 BCC: The Catholic Health Alliance of Canada has unveiled an initiative called Awaken to celebrate the hard work of people in Catholic health care. Two pillars of that initiative are “culture of encounter” and “commitment to social justice.” When you reflect on the history of Providence Health Care, what stands out for you?

Dalton: When otherwise healthy young men were inexplicably dying of pneumonia in the early 80s, we didn’t say that we didn’t know how to help or that we were worried about transmission.

Instead, in the face of international panic when many hospitals were barring their doors, St. Paul’s became the only health facility in the province to fully open our doors, and our hearts, to those with this seemingly highly contagious disease that we now know as HIV/AIDS. Back then, very little was known about the disease or how to treat it.

Similarly, in response to the opioid crisis, we opened the BC Centre on Substance Use at St. Paul’s Hospital in 2017. In its first two years, it has become an international authority in addiction medicine. The BCCSU is researching and implementing evidence-based approaches to treating substance use.

The goal is to view addiction the way we view recovery from other chronic diseases: as a long-term process that includes regular treatment and a team of cross-disciplinary specialists. To achieve this, we’ve developed the largest addiction medicine training program in North America.

Along with training caregivers in this specialized field, we have our boots on the ground with judgment-free, evidence-based care at the HUB sites (providing a suite of services for people living with mental health and substance-use challenges) including the Rapid Access Addiction Clinic and the Vancouver Police Foundation Transitional Care Centre, as well as the Crosstown Clinic, which is North America’s only prescription heroin treatment centre.

Go here for the full interview, including comments about the new St. Paul’s, which is expected to open in 2026.