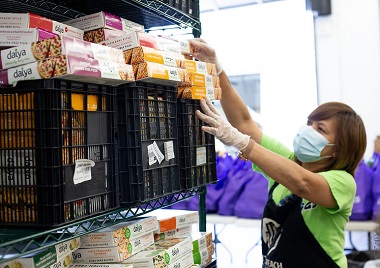 Hundreds of volunteers help out at CityReach. Broadway Church photo.

Update: Dr. Bonnie Henry announced about 3:15 pm January 7 that the current restrictions regarding gatherings has been extended until February 5.

Will our churches be able to host in-person gatherings and worship services again? We should have the answer before the end of the week.

Although initially instituted for just two-and-a-half weeks, the order was later extended, with the understanding that the decision would be reviewed before January 8.

Dr. Henry and Minister Dix will likely state whether they will rescind, modify or extend the restrictions during their televised briefing Thursday afternoon (January 7). 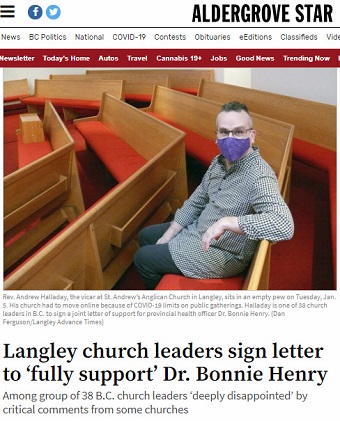 As the letter states, we are deeply grateful for their integrity and leadership and thought it was important to make our voice known, especially when the words and actions of faith leaders and churches which defy the public health orders get amplified in the media.

We have been deeply disappointed in the multiple times that the voices of a particular group of faith leaders have been spotlighted and amplified publicly criticizing your work and your mandates. As you are already aware, those voices do not speak for all of us. We want to publicly reiterate our gratitude and support for your work.

We are deeply grateful that you have, from the beginning, taken time to be in conversation with faith leaders and have spoken publicly many times in support of the work we are doing. We are
looking forward to working with Dr. Robert Daum to continue those conversations.

Only a very small percentage of churches are defying government orders. Usually mentioned are Free Grace Baptist Church and Chilliwack Free Reformed Church in Chilliwack and Riverside Calvary Chapel in Langley, though there are a few others as well.

The Canadian Pacific District of the Christian and Missionary Alliance has dealt well with this issue, as it has with many others related to the pandemic. District Superintendent Errol Rempel’s statement on ‘Pandemic Restrictions and Civil Disobedience’ includes this sentence:

This is not about rights snatched away from us by malevolent authorities; it is about rights freely relinquished for a season. 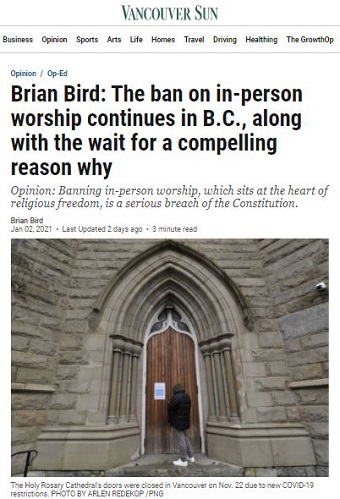 While Brian Bird, assistant professor at the Peter A. Allard School of Law, acknowledges that Charter rights and freedoms may be limited if there is justification to do so, he insists that political leaders must explain their reasons.

Writing in the Vancouver Sun January 2, he said:

In a column published shortly after the current restrictions were announced, I argued that this context – along with the constitutional protection of religious freedom – demands a compelling explanation of a provincewide ban on religious worship while activities such as shopping, dining out and some fitness activities continue in-person.

It’s also reasonable to ask, without taking anything away from their obvious value, why groups such as Alcoholics Anonymous may still meet in church basements while churchgoers can’t gather upstairs in similar numbers. What is the public health reason for barring a prayer group from meeting in a place of worship but allowing a support group to do so? . . . 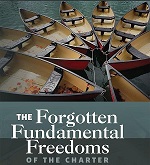 In further defence of the restrictions, Dr. Henry declared that faith is “not a building” or “about rights.” These are astonishing statements. Apart from the impropriety of state-sponsored theology lessons, the state has a solemn constitutional duty to care about rights.

Banning in-person worship, an activity that sits at the heart of religious freedom, is a serious breach of this constitutional guarantee. The Constitution demands meaningful justification for this breach. Talking points aren’t enough.

Go here for the full article. I wrote about Bird and the Forgotten Freedoms project here. 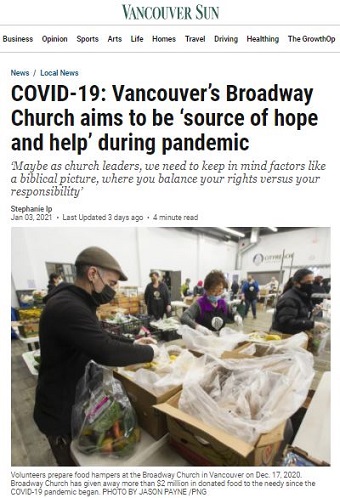 The vast majority of churches are making the best of the situation, not necessarily agreeing with the restrictions, but obeying them and carrying on.

Too much conversation around our constitutional rights as temporal citizens (important as they are) lacks the impulse of the mission of heavenly citizens. Play the long game of witness and mission in your neighbourhoods. No one is stopping us from loving our neighbours.

(He was probably not responding directly to Bird’s message; many opponents of the church closures have relied on Charter arguments.)

Stephanie Ip wrote a lovely article about Broadway Church’s work during the pandemic in the Vancouver Sun January 3:

While some churchgoers have made headlines in recent weeks for breaking health orders and continuing to gather, others are hopeful the public can be reminded of the good still being done elsewhere. 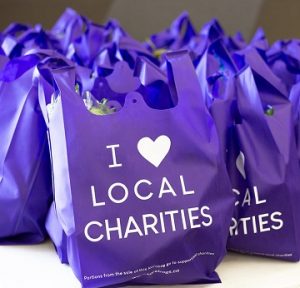 “When I read that stuff, I’m of two minds. There’s one part of me that thinks – yes, I understand the frustration,” said Latham, noting that some churchgoers likely bristle at the fact that restaurants and retail shops are permitted to stay open.

“But on the other hand, I think – there’s a bigger principle here, there’s a bigger picture. Maybe as church leaders, we need to keep in mind factors like a biblical picture, where you balance your rights versus your responsibility.”

Broadway Church resolved to be creative in the face of the pandemic:

“When we first had to shut down, our management team pulled together and said, ‘OK, how can we lean into people’s lives instead of dropping out?’ That was the question. So we said, alright, we have to look for ways that we’re positioned to most effectively serve our community,” said Latham.

Pre-pandemic, the East Vancouver church had established ties to the community through its CityReach organization, along with a food hamper and mobile food bank program. Where they previously handed out 100 hampers of food weekly, each worth about $80, the church’s outreach organization upped that figure to 1,000 hampers a week once the pandemic roared in. 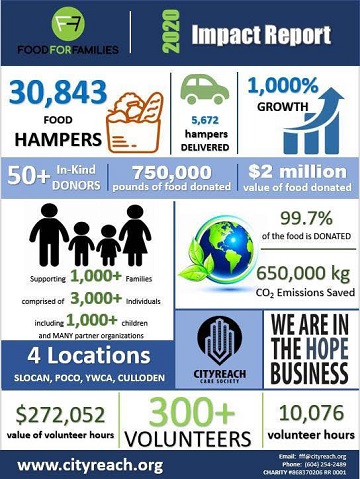 Some 200 volunteers pack the hampers each week to recipients who are 60 percent families with kids, 30 percent seniors and 10 percent individuals who are at risk financially due to pandemic job loss and hardship.

Writing for The B.C. Catholic December 21, Agnieszka Ruck concluded 2020 in Review: a pandemic perspective on this plaintive note:

As Catholics ring in 2021, likely feeling the loss of familiar liturgies and fatigued by too much screen time, we’re sure some will join us in wondering: what could happen next?

Paul Schratz, editor of The B.C. Catholic, reflected on some key issues in his What have we learned? column December 17. He said, in part:

Religious liberty was soon put to the test as churches were shut down across Canada, sometimes for seemingly reasonable justifications at the time, but sometimes not.

The willingness of many Canadians, including people of faith, to unquestioningly accept the shutdowns is disconcerting. While B.C. politicians issued bromides about the importance of religion and thanked faith communities for their cooperation, the obvious question that needs to be asked is, if it’s this easy to impose restrictions on houses of worship now, how hard will it be in future?

There’s fashionable sentiment that churches could use some reigning in, whether with heavier taxes or more restrictions on public expression. When religion isn’t considered essential, it becomes easier to treat it as inconsequential.

Whether the provincial government extends, softens or removes restrictions on religious gatherings, we should expect further explanations for their decisions. In the meantime, it is encouraging to see how community-minded most churches are under pressure.