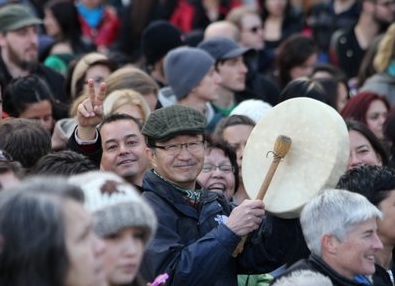 Bill Chu on the annual Women’s Memorial March for Missing and Murdered Women in 2012, with former National Chief Shawn Atleo (left) and Regional Chief of the BC Assembly of First Nations Jody Wilson-Raybould (right). Photo by Don Bain.

We live in the shadow of a colonial era, a time when according to the European Doctrine of Discovery, any lands not occupied by white Christians were free for the taking. The complicity of the church began with the epic colonial dispossession of land and resources from Indigenous people of colour worldwide.

In the subsequent global movement to decolonize, four colonies could not be liberated as they have become home to Canada, United States, Australia and New Zealand. Thus Indigenous people in Canada continue to be marginalized and oppressed under the colonial 1876 Indian Act.

The Supreme Court of Canada delivered its ground-breaking Tsilhqot’in ruling June 26, affirming Aboriginal title on more than 1,700 square kilometres of traditional territories to the Tsilhqot’in First Nation. Now that the judges of our day have raised the bar, how much more should we as God’s ambassadors respond to the challenge for reconciliation?

As an organization focused on seeking reconciliation, Canadians For Reconciliation Society (CFRS) is joining many to support the Supreme Court’s decision. As this may be a surprise to some less familiar with Canada’s colonial history, CFRS wishes to echo this long overdue justice and recognize it as a landmark step towards a fair Canada. 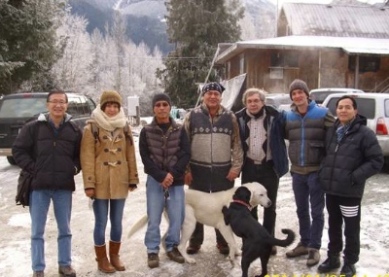 Bill Chu (left) and friends delivered some relief to the Mount Currie community earlier this year.

Through befriending many Indigenous people over two decades, I have come to know them as honourable, generous people with deep respect for the environment. So, as a result of this ruling, Canadians are not losing anything, but are instead gaining partners known for their stewardship of the land, waters and creatures, not just for one generation but for all generations.

We are thus inviting all Canadians to support this unanimous decision by the Supreme Court of Canada judges for the following reasons:

1. As Canada had signed no treaty with the Tsilhqot’in First Nation, it was unjust for BC to grant a logging licence on land southwest of Williams Lake in 1983. The decision written by Chief Justice Beverley McLachlin states: “British Columbia breached its duty to consult owed to the Tsilhqot’in through its land use planning and forestry authorization.”

British Columbians should be humbled by the fact that over 60 percent of BC’s land mass still has no signed treaties, and that hundreds of Indigenous groups across the province have unresolved land claims. The practice of using BC’s lower courts to prosecute Indigenous dissenters and fill our prisons with them is neither sustainable nor just.

2. The Supreme Court has laid out for the first time how to determine whether a First Nation can prove title: sufficiency, continuity and exclusivity of occupation. In other words, Aboriginal title is not dependent on providing a deed that only Canada is allowed to print, but instead depends on the nature of pre-contact occupation by a particular Indigenous group.

The high court has found the BC Court of Appeal’s definition of occupancy too narrow: “There is no suggestion in the jurisprudence or scholarship that Aboriginal title is confined to specific village sites or farms, as the court of appeal held,” said the ruling. “Rather, a culturally sensitive approach suggests that regular use of territories for hunting, fishing, trapping and foraging is ‘sufficient’ use to ground Aboriginal title.”

This dismissed the historical bias that Indigenous people are incapable of being owners of land.

3. “This is not merely a right of first refusal with respect to Crown land management or usage plans,” said the ruling. “Rather, it is a right to proactively use and manage the land.” The court affirmed the Tsilhqot’in has the right to determine “the uses to which the land is put and to enjoy its economic fruits.”

This is a much more equitable solution than the previous situation, where non-Aboriginals have generally been reaping the economic benefits of the land, while Natives continue to languish in poverty and Third World conditions for generations.

The ruling also clarified that such intrusion “must also be justified on the basis of a compelling and substantial public interest, and must be consistent with the Crown’s fiduciary duty to the Aboriginal group.” This changes the non-Aboriginal obligation from ‘consult’ to ‘obtain consent,’ which is in line with business practice in Canadian society.

As mentioned by Tsilhqot’in First Nation Chief Roger William, we need to say sechanalyagh (thank you) to Tsilhqot’in elders, many of whom testified courageously in the courts (and some have passed on). Through their perseverance, we are seeing a historic step forward for Indigenous title and rights, but more importantly, an opportunity for Canada to redeem its soul. May we all rejoice and begin our walk with our Indigenous neighbours and partners on an honourable and respectful journey. 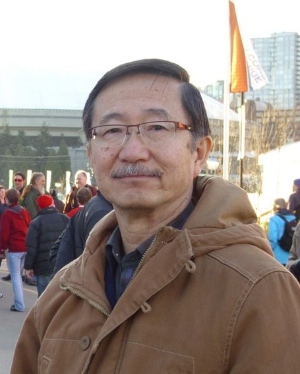 Bill Chu has been active for many years on a number of social justice issues – including opposition to gambling, support for Aboriginal rights and advocacy for acknowledging historic injustices to the Chinese community.

He helped found Chinese Christians In Action Society in 1989 to express support for the student’s democratic movement in China. In 1990, the Oka crisis in Quebec “forced some of us to think if we were concerned about the ones crushed at Tiananmen Square, shouldn’t we be concerned about those Aboriginals to be crushed at Oka? . . . By 2001, we had witnessed so many major conflicts with Aboriginals in Canada that we were convinced reconciliation with the Aboriginal deserved a focused treatment and CFRS was born.”

← Around Town: Triumph at the Jessies, Church on the Street, Grateful Dead . . .
Rash decision by Nanaimo City Council has attracted national attention →