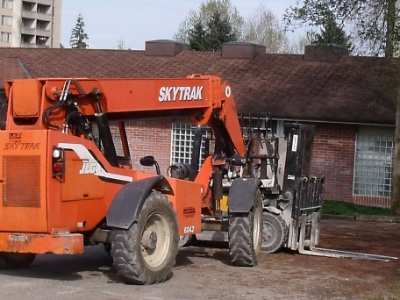 Christ the King Lutheran Church is being torn down to make way for a Bosa Brothers residential tower.

The demolition of the little red brick 50s-era Christ the King Lutheran Church, across the street from the massive new Surrey City Hall, will likely be accomplished by Good Friday.

And with its demise, not one but two congregations will be meeting for worship in other places for the next 18 months or so. And the demolition illustrates the many changes that see new and regrouped churches around the burgeoning Central City area of Surrey meeting in a variety of shared or non-church settings.

Church for Vancouver is presently engaged in a somewhat less than exhaustive survey of non-traditional church-meeting activities and facilities both south (this week) and north (next week) of the Fraser River. 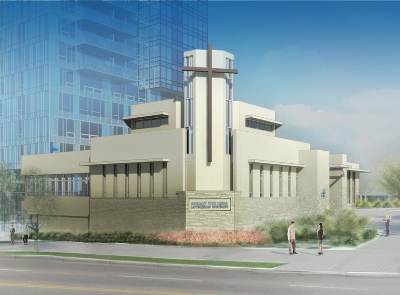 Christ the King Lutheran Church will be at the base of the new tower:

The demolition of Christ the King is the second step in what will end up as a new 300-seat worship/concert/meeting facility on its site.

The land has been purchased by Bosa Brothers for construction of the first residential tower in a six-building complex north, east and west of the City Hall.

The project is known as University District, identifying with Simon Fraser University’s Surrey campus a block to the south. The church will be a low-rise pod at the base of the new tower: A commercial facility with match it on the other side of the base.

Christ the King will be meeting in the Woodward School, just around the corner. The Chinese Seventh Day Adventist congregation, which has been renting from Christ the King for some years, for Saturday services, has yet to announce where its new meeting place will be.

The first step in this process involved the moving of Surrey Urban Mission, a trans-denominational effort initiated by the Lutheran synod with which Christ the King is affiliated, to a King George Boulevard a few blocks north. 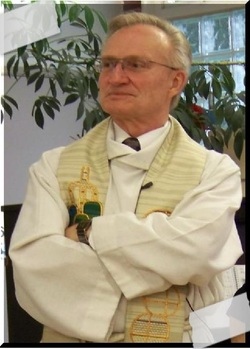 Gordon Charles is pastor of Christ the King Lutheran Church.

Surrey Urban Mission is across the street from another street ministry, NightShift. Both missions receive support from a wide range of churches, businesses and community organizations, in order to meet the physical and spiritual needs of people living on the streets.

Also involved in that move northward was Emmanuel Chinese Lutheran Church, which had been sharing facilities with Christ the King. It is next door to SUM.

Christ the King pastor Charles Gordon notes that the new church will mean the beginning of a new era of service for the congregation, in the emerging Central City – something the church’s leaders could never have imagined in the late 50s, when it was founded.

But Christ the King is not the only place where some church configurations which could never have been envisaged decades ago are becoming the new reality.