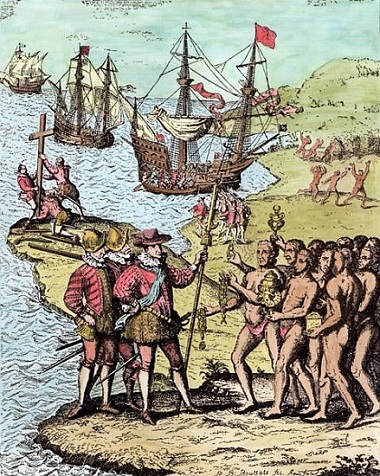 From a stamp engraved on copper by Theodore de Bry, 1590: “Discovery of America, 12 May, 1492, Christopher Columbus erects the cross and baptizes the Isle of Guanahani by the Christian name of St. Salvador.” (Upstander Project)

We still live with the legacy of historical, heretical beliefs. But God can make us new.

In 1882, Canada’s first prime minister John A. Macdonald said to the House of Commons, “I have reason to believe that the agents as a whole . . . are doing all they can, by refusing food until the Indians are on the verge of starvation, to reduce the expense.”

In other words: Let’s starve the Indians to death to cut our expenses.

In 1876, the Indian Act was passed by the Canadian government. They seized control of First Nations land, in most cases without properly compensating them. The Act also set in motion a process which would lead to the destruction of Indigenous traditions.

What created the political and legal justification for European colonists to seize lands that were already occupied by people, and, among other abuses, take indigenous children out of their families, put them in residential schools, and essentially tell them that “the Indian in you needs to be killed?”

The justification came from something known as the Doctrine of Discovery.

The Doctrine of Discovery emerged from papal bulls issued by Pope Nicholas V. The first was Dum Diversas, issued on June 18, 1452. The doctrine created political and legal justification for European colonists to seize the land of native peoples and paved the way for indigenous peoples to be abused. It authorized King Alfonso V of Portugal to enter foreign lands and subjugate Muslims, pagans and any other unbelievers to perpetual slavery.

Pope Nicholas issued another bull in 1454 that gave Catholic nations of Europe dominion over lands they “discovered” and encouraged them to enslave native, non-Christian peoples in Africa and the Americas. Eventually, these pronouncements became the basis for European Christian nations to dominate, oppress and claim the lands of people in Asia, Australia and New Zealand.

The Doctrine of Discovery asserted that if a white, Christian European claimed to discover a land in the name of the European monarch and planted the flag of the king on its soil, the land was now the king’s – even if someone else was living there.

As Navajo activist, author and pastor Mark Charles points out, you cannot “discover” land that already belongs to other people. Many people still assume that Christopher Columbus discovered North America, but he didn’t. There were indigenous people who had lived there long before he arrived.

The whole Doctrine of Discovery is false teaching and heresy, based on the assumption that non-European, non-Christian Indigenous people are subhuman. Therefore, European Christians are free to take whatever belongs to non-white, non-Christian people because any claims they have to anything – including land – are not valid.

Part of our current systemic racism can be traced back directly to the legacy of the institutional church. It was the church that created the Doctrine of Discovery, the heretical teaching that non-white, non-Christian people are less than fully human. So, their land could be taken. Their children could be taken. They could be enslaved, raped and abused because they were merely property.

The effects of the Doctrine of Discovery continue to this day.

At Tenth Church, we begin our public services with an acknowledgment that we live, work, and worship on the traditional and unceded land of the Musqueam, Tsleil-Waututh and Squamish Coast Salish peoples. This is a way of saying we categorically reject the Doctrine of Discovery.

We can only move forward and live free from the evil of racism when we recognize that every human being – no matter their race, culture, gender or background – reflects the image of God.

We human beings have a built-in neurological capacity to look at other human beings and quickly assess: Are you in my cave or are you not in my cave? And if you’re not in my cave, I will either ignore you or, as research shows, if I’m threatened, I will treat you with hostility.

But, according to neuroimaging brain scans, if you look at someone who looks different from you, and then you are told that this person has a similar upbringing or education or religious background, or a similar whatever, then the compassion circuits in your brain light up.

Science tells us that, no matter how different we may look, we share 99.9 percent of the same genes with all human beings. (That other 0.1 percent accounts for differences in hair texture, eye shape, skin colour, etc.) If we also allow God to remind us that every person is made in his image, we will recognize that we are more similar than dissimilar. The compassion circuits in our brain will light up. We will be less likely to see someone else as the other.

We will also recognize God’s image more fully in others when we allow God to make us new and restore his image more fully in us. In 2 Corinthians 5:17, we read, “Therefore, if anyone is in Christ, he or she is a new creation: The old is gone, the new has come!” This comes right after Paul’s proclamation in the previous verse: “So from now on we regard no one from a worldly point of view . . .” (NIV).

When we are made new by Jesus Christ, we see people differently. What we see is shaped by who we are. A clear sign that we are being changed by Christ is that we don’t see people through a racialized lens, but instead we see the beauty of God’s image in others – particularly those who are different from us.

Often what we see in others is a reflection of what is inside ourselves. There may be legitimate reasons why we might see some individuals as horrible. But if you tend to see everyone as horrible and evil, you’re likely projecting what is going on inside you onto them.

God became a human being in Jesus Christ, and while we were yet sinners, still enemies of God, Jesus died for us so our sins might be washed away. So, we are called to move into the lives of people who are very different from us, and perhaps even hostile toward us. Like Jesus, we are to move toward them and lovingly sacrifice on their behalf.

And when we move toward people who are different from us – whether because of their race, ethnicity, culture, gender, orientation, whatever – our prejudices tend to fall away.

In his inspiring memoir, The Sun Does Shine: How I Found Life and Freedom on Death Row, Anthony Ray Hinton, who goes by Ray, writes about how he spent 30 years on death row for a crime he did not commit. When he was arrested, he was told by the police officers that he would be going to jail because he was black.

While Ray was in prison, he became good friends with a white man named Henry. Only much later did Ray learn that Henry was the son of a leader in the Ku Klux Klan. Henry had also been part of the KKK and had been arrested, convicted and imprisoned for lynching a black teenage boy named Michael Donald.

When Ray confronted Henry about his identity, Henry confessed, “Everything my mom and dad taught was a lie, Ray. Everything they taught me against blacks. It was a lie. You know, just about everything I know about people I learned from my mom.”

Ray replied, “Yeah, I guess I was just lucky enough that my mom taught me to love people no matter what. She taught me to forgive.”

“You was lucky, Ray,” Henry said. “You was really lucky.”

Ray and Henry’s friendship, though unlikely, was a priceless gift to them both. They realized they had more in common than not.

I have been fortunate to develop friendships with people of African ancestry, indigenous peoples, people on the LGBTQ spectrum, people of different religions or no faith, people I might otherwise consider as the other. In friendship, I realized we have more in common than not. In friendship, I can better recognize the image of God in someone else.

And when you’re friends with people who are hurting, you want to offer your support. That’s why right now many of us are saying or affirming that black lives matter. Given the history of violence and injustice against our indigenous hosts, our indigenous sisters and brothers, we also say indigenous lives matter.

We affirm that they, like us, are made in the image of God.

To echo the language of scripture, God calls us as members of the same human family to be our brother’s keeper, to be our sister’s keeper. 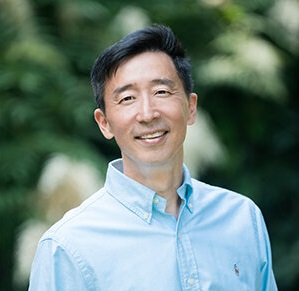 Let us pray with the psalmist of Psalm 139 that God would search us and know us and see if there is any offensive or racist way in us, and lead us in his everlasting, ever-healing way.

This article is based on a sermon Ken Shigematsu gave over truth and reconciliation weekend and first appeared Reclaim magazine, published by the Asian American Christian Collaborative. It is re-posted by permission of the author and will be published as a full-length sermon by Christianity Today’s preaching journal next year.

Ken Shigematsu is senior pastor of Tenth Church, and author of God in My Everything and Survival Guide for the Soul. He lives in Vancouver with his wife Sakiko and their son Joey.