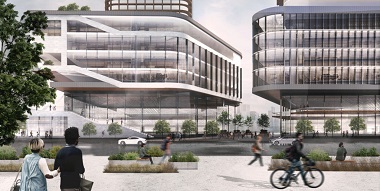 A rendering of the potential development of the site purchased from Grace Community Church. UBC image

The University of British Columbia (UBC) has bought property from one of Surrey’s largest churches.

The University of British Columbia is expanding its presence south of the Fraser River with the $70 million purchase of a property in Surrey.

UBC Properties Trust has acquired a 135,000-square-foot property – currently home to the Grace Hanin Community Church – at the intersection of King George Boulevard and Fraser Highway.

The site, which is located close to SkyTrain, Surrey Memorial Hospital and other community amenities, is anticipated to be a combination of residential and commercial space which will generate revenue to enable the construction of dedicated academic facilities.

UBC said public consultation with Surrey and other Fraser Valley communities, alongside Indigenous leaders, will get underway next year.

The school did not indicate whether it had a timeline for the development.

Thus it appears the church will not have to move in the immediate future. 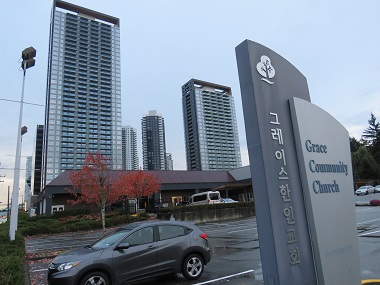 Grace Community Church is the low rise building, not the high rises which are north across Fraser Highway.

He said the church will definitely be relocating, but not right away. And because the new location is not confirmed they can’t say where to. But they will need, among other things, more parking space.

Grace Community Church joined the Evangelical Free Church of Canada in 2018. The Lower Pacific District of the EFCC featured the church as their ‘Church of the Week’ in a post last December:

It was such a joy to welcome this church to our family, and we very much enjoy serving with them. Grace Community Church was planted by Pastor Shinil (Hyojin) Park in 2003.

Their mission is to be, “A Church that transforms the world in the Name of Jesus.” This church has given birth to seven other churches, and is the largest church [at about 3,000 people] in the EFCC.

This is a reflection of the changing population of our district and the EFCC, and also a tribute to the mission and ministry of this church. We celebrate them and what God is doing through this church family! 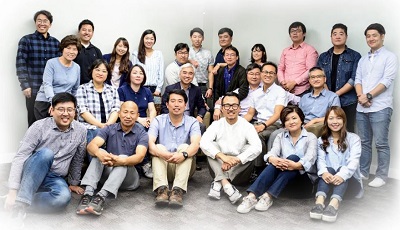 Pastor Shinil Park of Grace Community Church, who heads a group of nine male pastors, appreciates the tolerance of Canadians and the natural surroundings.

But the graduate of evangelical Regent College in Vancouver still has trouble with how “everything is kind of slow” in Metro Vancouver.

Part of him misses the enthusiasm rolling through South Korea. It may be part of why his own mega-church, at the corner of King George Highway and Fraser Highway, is vibrant.

It holds up to 10 services throughout every Sunday for crowds who drive or take the SkyTrain in from Korean neighbourhoods in Surrey, Coquitlam, Port Moody, Burnaby and the West End of downtown Vancouver.

That was pre-Covid, of course.

The face of Surrey City Centre has been completely transformed over the past decade or so. Writing (on this site) in 2017, Lloyd Mackey described a dramatically changing skyline. Looking out his apartment window, he pointed to: 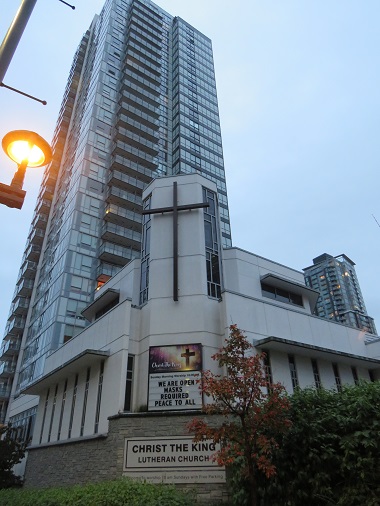 Christ the King Lutheran Church is now part of a larger project.

He added a church connection:

And development has continued apace since then. Mackey points out that City Centre Church (formerly Whalley Presbyterian) is exploring putting modular social housing (four storeys) onto one of their parking lots. City Centre is just a few blocks west of Christ the King on 104th.

He adds, “My view presently includes 10 cranes, five excavations, 15 development proposal signs and half a dozen high rise projects half to almost completed.”

Despite all the development in Surrey City Centre, UBC’s purchase of Grace Community Church still comes as a surprise. Mackey says, tongue in cheek: “Interesting that an EFCC church with affiliation to Trinity Western should sell its property to UBC whose president Santa Ono, is a known evangelical.”

← Creating Conversation: Loving your neighbours during Covid
Around Town: Help for Lytton, Vienna House, A Rocha at 20, IDOP . . . →