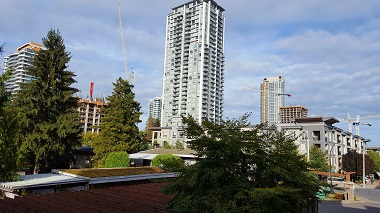 Lloyd Mackey argues that development is going strong in the centre of Surrey; this is the view from his window.

My long-time colleague (and frequent contributor to Church for Vancouver over the years) Lloyd Mackey wrote a comment in response to Peter Biggs’ A snapshot of faith in Surrey last week. I thought it would make a good article on its own, and he was good enough to expand upon his comment and send some pictures.

I would like to commend Peter Biggs for his thorough research and perceptive analysis of the city of Surrey and its Christian community.

That said, I would like to add some further thoughts from the place where Edna and I are living in retirement, in the middle of the burgeoning south-of-Fraser urban centre currently known as Central City and historically described as Whalley. I would take gentle issue with the quoted Globe and Mail reference to an alleged ‘stall’ in Central City’s 30-year-long redevelopment activity.

From our living room window, we can see SkyTrain skitting in and out of Surrey Central station, which is presently undergoing a $25 million expansion. From right to left, we note:

There are also burgeoning developments surrounding the King George SkyTrain station. Five Concord Pacific towers provide mid-range housing for a few thousand people and a sixth is about to begin construction.

The Hub project is already underway with the completion of the cruise-ship-like Coast Capital credit union headquarters tower. Residential and office towers will soon be under construction just south of the Coast Capital building.

The Hub will be located just north of Surrey’s second-largest Protestant congregation, Grace Community Church. Grace, with 3,000 members and adherents, is mainly Korean in its makeup and also has a Chinese component. It will be interesting to see how its outreach develops when a more diversified population develops at The Hub. Across King George Boulevard from The Hub, a Hilton Hotel and residential tower is planned for construction in the next three years or so. 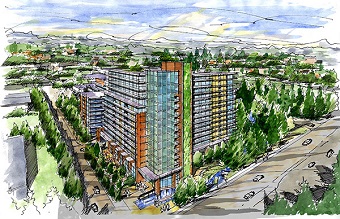 Moving further south, we move into the health care sector hub of Surrey’s Innovation Boulevard. (The education sector, as hinted at above, is focused in Central City, around Simon Fraser’s Surrey campus and City Hall.)

Surrey Memorial Hospital is seen by health care planners as a place that will not only serve the city but draw research, health care education and innovation, pharmaceutical activity to a world-class complex. Three Lark City Centre buildings, one open for two years, another almost complete and a third “shovel ready” are located immediately north of the hospital.

And across King George, on a site occupied for years by a trailer park, the aforementioned WestStone is building a multi-faceted seniors community of care known as Innovation Village, beginning in January. WestStone describes it as being “in alliance with Surrey Memorial Hospital, Surrey Economic Board and the City of Surrey.”

The WestStone folk have taken two steps to respond to initial concerns about the project: They delayed it two years to help resettle the trailer park residents and they set into place a plan to restore a former salmon-bearing stream to that long-lapsed status.

It would be well to mention, too, that the City of Surrey has been developing a network of eco-friendly geo-thermal heating systems underground, to provide hot water heating to many of the Central City towers.

Now, to the punch line: Some consider the infamous “Strip” on 135A Street, between City Hall and the Gateway community, to be a blight. That is at least half the story. True, a few hundred homeless people are there, served by a compassionate police presence, some Christian missions and readily available crisis medical care.

In time, that will change, just as conditions changed at the Innovation Village site. City redevelopment will focus on creating a “Whalley Historic District” which will include such initiatives as a restoration of a classic golden-domed Orthodox Church, several ethnic restaurants and, replacing the old Flamingo strip-bar hotel, an arts-based residential and commercial community.

Again, the process will involve several years, so the changes can be constructively absorbed. And one of the keys to those changes is the now-breaking story about City Dream Centre.

For more information about City Dream Centre, go here; a video shot in a 17-year-vacant 350,000 square foot edifice on 104th Avenue enunciates a vision for a resource centre for homeless, addicted, and socially spiritually and mentally stressed people living on The Strip. The building is on the future LRT route from Central City to Guildford, another of Surrey’s ‘centres.’

The project is inspired by the multi-faceted Los Angeles Dream Center – a former Catholic Hospital taken over in the 1990s by a Pentecostal group headed by Matthew Barnett – which has helped reduce crime, addiction and mental health issues by a reported 75 percent since its inception.

The City Dream Centre, initiated by Relate Church, has been receiving supportive buy-in from 15 of Surrey’s largest churches and many in the civic and health care leadership of the city who have wondered how the Christian community might help resolve some of the community’s social stresses. Among other things, it will involve raising, conservatively speaking, about $50 million over the next few years.

[Reporter Tom Zillich has written a couple of reports on the development of City Dream Centre, here and here.]

All of which is to say, there is not much “stall” here, even though it will take at least another 15 years, to see the vision fully play out.

And there will be many ways in which the Christian community can be involved in seeing that the changes go forward, not sideways.

Go here for a related story by Lloyd Mackey from 2014: Surrey’s Central City home to a great diversity of churches. It discusses the Bosa / Christ the King Lutheran connection and more.

← Care about arts and spirituality?: Verge Conference is the place to be
Around Town: Walk for Reconciliation, Santa Ono, Light Up the Choirs . . . →

2 comments for “Surrey’s Central City still developing briskly; churches are in the thick of it”