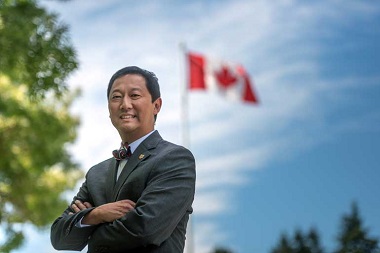 Dr. Santa Ono has been chosen as the 15th president of the University of British Columbia. By all accounts a popular and well-rounded leader, he has also been public about his Christian faith over the years.

UBC describes Ono, 53, as “a biomedical researcher who is a pioneer in experimental medicine with an established track record as a senior leader at U.S. universities.” He earned an experimental medicine PhD from McGill University and has held prestigious positions at Harvard Medical School, Johns Hopkins School of Medicine, University College London and Emory University. Since 2012 he has been president of the University of Cincinnati.
Ono has been warmly received by local media, who have highlighted his connection with Vancouver, his strong academic/professional background and his openness about his life, including personal struggles.
A June 14 CBC news report opened this way:

The Vancouver-born medical researcher who won accolades as University of Cincinnati (UC) president practically grew up at UBC. His father – Takashi Ono – was briefly a professor of mathematics, his first tenured position after immigrating to Canada in the 1950s.

“We were immigrants. UBC played a transformative part in my family’s life, allowing us to stay in North America. The small apartment we lived in is still there,” said Ono, adding that his father is “bursting with pride” over the recent news that Ono will take over as UBC president in August, a year after the controversial resignation of Arvind Gupta.

A Vancouver Sun interview on the same day asked him about the fact that he has turned down bonuses and pay raises (at the University of Cincinnati, he sold the president’s house and created $3 million of scholarships), what he likes to do for fun (play ‘Purple Rain’ on his cello, join students in intramural sports . . .), his social media savvy – and about past struggles with mental health:

Q. You’ve spoken out very publicly about your own struggles with depression when you were younger. Why did you decide to do that?

A. I was about to speak at a fundraiser in May and I spontaneously said to myself that because of my position and my stature, and my visibility – you might know that I also have over 73,000 followers on Twitter – I have a unique ability to communicate. I thought that would be a good position to start to break down stigma. So it’s for that reason that I revealed my attempts to take my own life as a child at age 14 and as a young adult at 20. 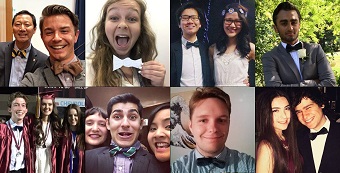 The Georgia Straight focused on Ono’s Twitter presence (his new moniker, @ubcprez, already has 2,380 followers as I write). A June 15 article titled ‘New UBC president Santa Ono gets to know students with a Twitter contest looking for bow ties’ pointed out:

Eight dapper UBC students have secured invitations to an exclusive dinner at the residence of the university’s new president.

Earlier this morning, Santa Ono sent a challenge out over Twitter.

“First 6 UBC students to tweet me photos of themselves in bowties will be invited to dinner at President’s house RT,” he wrote. . . . Ono originally said he was hosting a dinner for six but then extended eight invitations.

Shortly after Ono took over as president of the University of Cincinnati, the university’s UC Magazine presented Getting to know Ono, which covered many aspects of his life and personality. Not surprisingly, the coverage was positive, but the appreciation seems unfeigned, and deserved.

One point the article cleared up was where he got his unique name. His parents named him after Santaro, a Japanese folk story character.

“I don’t think they knew what they were setting me up for by naming me Santa, especially around Christmas time,” the president says. “People teased me about it as a boy, but I have no problem being called Santa. It is a very happy name. And it is a great icebreaker at parties.”

Towards the end of the article, the writer addressed Ono’s Christian faith, under the subhead, ‘Open about his faith.’:

When it comes to influences on his own life, nothing seems to impact President Ono quite like his faith. He and his family worship at the Episcopal Church of the Redeemer in Hyde Park, where Ono also serves as a eucharistic minister, a layperson licensed by the bishop to give communion.

The article points out that Ono was not brought up in the church, but came to faith in his early 20s, after going a bit wild in the new-found freedom he found at college, following a rather strict home environment.

Ono credits Christians for stepping into his life and becoming positive role models, including his roommate, Steve Barry, a Catholic student, who invited Santa to Bible studies as part of the University of Chicago InterVarsity Christian Fellowship. The next Christian influence came from the woman who would become his wife. While doing his graduate work at McGill University in Montreal, Wendy invited him to Westmont Baptist Church.

“There was a pastor there who really played a very important role in bringing me to Christ,” he says. “And I was baptized as a 20-year-old in Montreal. For me personally, being introduced to Christ provided a spiritual and moral rudder that has helped me stay on course.”

No doubt Ono must walk a careful line as a Christian who is a leader in public institutions. The article said:

While Ono has embraced his role as a high-profile Christian leader on the various campuses that highlight his resume – even serving on InterVarsity’s national board – he recognizes and respects the fact that UC is a multi-faith institution.

“I believe in all faiths,” he says. “I don’t want to use my position in any way to be evangelical on a secular campus. I think that being involved in a Muslim group, a Jewish group, a Catholic group or a Protestant group on campus can play a very important role in the development and stability of students.”

At the same time, he’ll never be what he calls a “stealth Christian,” an academic who hides his faith out of concern for what others on campus might think.

For another insight into his faith, go to InterVarsity’s Alumni site, which says, in part:

“I actually think it’s very healthy for the university community to know of the religious beliefs of faculty and administrators,” he said. “I see no reason why I as a Christian should hide Christ in my life, as long as I show respect for those with different faiths. . . .

“Students learn from diverse perspectives across the university community and they can only learn from the richness of a multi-faith community if they can actually see people thinking about, struggling with and practicing their faiths.”

In 2011 Santa Ono addressed InterVarsity Graduate and Faculty Ministries Staff Conference on the topic, The Future of the University.

Ono will take on his new role at UBC in August.

2 comments for “UBC’s new president appreciated for his strong record, and his candour”