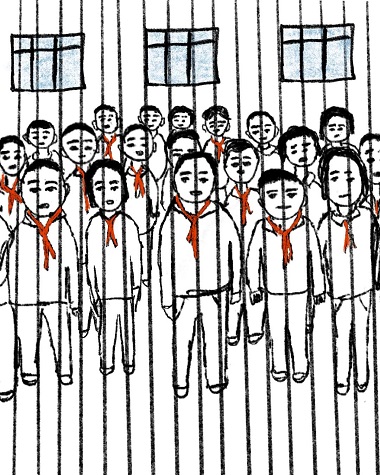 Uighurs are being held in detention camps. Amnesty International image, from ‘The nightmare of families separated by repression.’

The most memorable – and enjoyable – vacation our family has ever taken was in the mid-1980s, when we visited Xinjiang, in the far corner of northwest China.

At the time, my wife and I were missionaries in Pakistan, and our two sons in high school. Heading straight north from Islamabad on the Karakorum Highway, along the way, we saw magnificent mountain ranges (Himalaya, Karakoram, Hindukush).

After going through the highest border crossing on earth (Khunjerab Pass over 15,000 feet), we drove another 50 miles inside China, and then were required to travel by taxi. This area was a vast, arid desert and extremely poor, but home to rich minerals, and huge oil deposits.

It was amazing to realize that Xinjiang borders eight countries! Arriving in Tashkurgan, a Han Chinese man ‘offered’ to be our guide. Foreigners were obviously being monitored here, but nothing like the scrutiny Muslim minorities are living under today.

This article will focus on Uighurs [or Uyghurs], the largest of those persecuted groups, responding to questions as to their identity, the extent of their suffering and what more can be done to help them.

Who are the Uighurs?

Throughout China, there are 56 minority groups and 10 of these are Muslim, including Hui, Uighur, Kazakh, Kyrgyz, Tajik, Uzbek and Tartar. Hui is the largest, but as explained below, they have fared much better.

Officially, there are over 10 million Uighurs, but this only accounts for one percent of China’s population. They are the oldest known Turkic people, dating back to 8th century Mongols, when some held high positions in the Mongol court. When Islam entered this area in the 10th century, most adopted Sunni Islam, but like other Turkic Muslims, many have been influenced by Sufism.

This means that Uighurs are culturally, religiously, and linguistically more like Central Asians than Han Chinese. Over the centuries, they have developed a strong identity in oasis towns, and ever since the 1949 Communist takeover of China, have bristled against heavy-handed Beijing rule.

They also feel marginalized and shortchanged on the local level, as many Han Chinese have moved into Xinjiang, taken over the best jobs, and are mostly doing well financially. In contrast, Uighurs have often been forced to labor in the textile area, and many are struggling. As a result, they are frustrated and feel they have no future.

Hui Muslims slightly outnumber Uighurs, are scattered throughout the entire country, and blend in quite well. They already know Mandarin, understand Confucian culture, and look more Chinese. In short, the government responds to the Uighur and Hui in completely different ways.

What is going on in Xinjiang?[i] 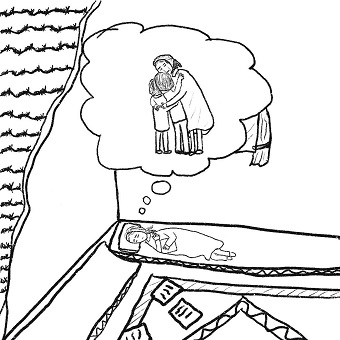 Amnesty International image, from ‘The nightmare of families separated by repression.’

Along with others, Muslims were oppressed during the Chinese Cultural Revolution (1966 – 1969), but in the wake of 9/11, it seems Muslims became more suspect.

Things came to a boiling point in 2009 as ethnic tensions between Uighurs and Han Chinese escalated. The hot spot was Urumqi, Xinjiang’s capital, where allegedly Uighurs killed 200 Han Chinese. And, apparently, this message was widely spread on social media: “Kill the Han.” “Kill the Hui.”

Other incidents also took place. For example, in June 2012, six Uighurs reportedly tried to hijack a plane but were overpowered by passengers and crew. In 2014, two cars crashed through a market in Urumqi, and explosives were thrown into the crowd.

Following these events, if a crime was committed, it would probably be blamed on Uighurs, thought to be barbarians, thieves and terrorists.

President Xi Jinping, who visited Xinjiang after a Uighur terrorist attack in 2014, told local authorities to respond with “absolutely no mercy.” And that is exactly what happened as China responded to “terrorism, infiltration and separatism.”[ii]

In 2016, Party Secretary Chen Quanguo instructed local officials to take harsher measures. In addition to old-fashioned police checkpoints, high-tech facial recognition cameras were installed, and as a result, at least one in 10 Uighurs are now held in detention centres; that accounts for over a million people.[iii]

In these centers, verbal, physical and even sexual abuse is the norm. There is political indoctrination and detainees are forced to learn Mandarin. They must sing hymns of praise for the Communist party and write self-critical essays.

There has also been an increase in religious oppression against the Uighurs. Thousands of mosques have been destroyed (and also some shrines). Anything perceived as Islamic: beards, veils, books, fasting, prayer rugs and pilgrimage to Mecca (hajj) are prohibited.

Uighurs may even be detained for giving up smoking or drinking because it is seen as a sign of religious devotion. Uighurs are therefore condemned for being Muslim; in fact, any expression of Islam, when it comes to Uighurs, is considered a form of terrorism.[iv]

The degree to which artificial intelligence is used to suppress Uighurs makes Xinjiang the most highly monitored place on earth. Cameras have been even been installed in some homes. There is forced sterilization, mandatory birth control (IUDs), and forced abortion. Women have been detained for their husbands’ crimes. Children have been separated from their parents and placed in orphanages to be indoctrinated. These are called “re-education camps,” but the world knows better.[v]

It is common knowledge that for years China has been lying about what really goes on inside Xingjian’s “vocational education and training centres,” but who could imagine what was being done to Uighur women?  “. . . Rape has become a culture. It is gang rape and the Chinese police not only rape them but also electrocute them. They are subject to horrific torture . . .”

One public gang rape of a young woman took place in front of about 100 other detainees in order to force a confession. Police took turns raping her, and as the young woman cried out for help, onlookers were carefully observed. If they showed any sign of resistance on surveillance cameras, they were spotted and picked out for punishment.[vi]

Another escapee said, “They not only rape but also bite all over your body, you don’t know if they are human or animal . . . they didn’t spare any part of the body . . .” “. . . One girl became completely different after that [rape and torture], she wouldn’t speak to anyone, she sat quietly staring off into space.”

Later, that same woman was released and became “like someone who simply existed, otherwise she was dead, completely finished by the rapes . . . they say people are released, but in my opinion everyone who leaves the camps is finished.”

The [BBC News] article ends by saying that is the plan: “Their goal is to destroy everyone . . . And everybody knows it.”[vii]

How is China responding to criticism? 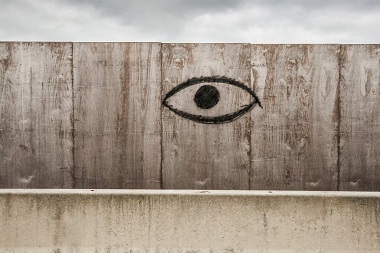 Amnesty International image, from ‘The nightmare of families separated by repression.’

At first, China denied the detention camps and later claimed it was simply weeding out extremism and preventing terrorist attacks. There is no abuse, China says, but only training centres that provide job skills.

It steadfastly denies singling out any one group but is only acting for the purpose of “rehabilitation and reintegration.” It is a matter of correcting “wrong thinking,” and they use words like “love,” “nurture,” “kindness” and speak of “Little Angel Schools,” in reference to children.

The truth is China is engineering the minds of Uighurs and claiming they are working for “better life habits.” It is “Sinicization,” the process of making people conform, particularly to the majority Han Chinese in matters like culture, language, social norms and ethnic identity. There is to be complete conformity with Communist ideology.

Some have questioned whether or not what is going on is physical genocide; however, forced sterilization, involuntary contraception and systematic suppression of birth rate certainly sound like it.

Genocide is defined as killing a large number of people from a particular nation or ethnic group. In Xinjiang, there is a deliberate attempt to diminish them, and estimates are that the growth rate among the Uighurs decreased 60 percent from 2015 – 2018. This paper suggests that what is going on in Xinjiang is both cultural and physical genocide.[viii]

What can we do to help?

The first thing is that we must speak up in defense of persecuted Muslims. This is more urgent since Uighur leaders fear the worse is yet to come, and Hui Muslims inside the country are also afraid of persecution. Unfortunately, Muslim majority countries have largely remained silent; therefore we must keep speaking and encourage others to do the same.

Another suggestion is to hold fashion brands accountable and stop importing them. Any brand of cotton from this part of the world probably comes through Uighur forced labor, many of them well-known brands. This unethical practice will no doubt continue until something is done, and the international community must think harder on how to stop it.

Finally, we can be on the outlook for Uighurs, who live around us in the West. We can discreetly do our best to befriend them, reach out with a helping hand and stand up for them in every way possible. There is no doubt that Uighurs in exile face harassment and intimidation if they speak up because they know China is keeping tabs on them.

We cannot allow this mass, systematic campaign of human rights abuse to continue. In facing the horror of the Holocaust against Jews in Germany, Dietrich Bonhoeffer said, “Silence in the face of evil is evil itself.  Not to speak is to speak. Not to act is to act.”

Click here to read “Standing up for Persecuted Muslims, part 1.

[i] Numerous reports have surfaced through HRW (Human Rights Watch), UN reports, satellite pictures and from the testimonies of escapees.  Also, the Intelligence Consortium of Investigative Journalists: “China Cables: ‘Who are the Uighurs and Why Mass Detention?”

[ii] Since Xinjiang is home to gas and oil reserves and China wants to rule out any hint of separatism.

[iii] That could be a conservative figure as others estimate well over 2 million are being held in detention camps.

[iv]This sounds like how some early Christians were treated.  When describing how unfair and unjust persecution could be in the Roman Empire, writing in the 2nd  century, Tertullian says believers were often counted criminals simply because they were Christian (The Apology, Beloved Publishing, 2014, p. 71).

[v] BuzzFeed News has taken hundreds of satellite images and says these large facilities in China look like prisons. 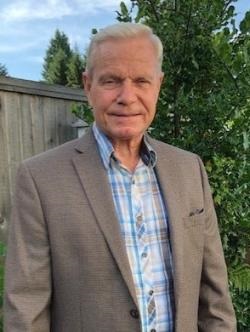 [viii] The UN has been saying for some time that what China is doing is genocide. For example, “China’s Suppression of Uighur Muslims Meets UN Definition of Genocide”  and “39 Countries condemn China over policies in Xinjiang, Hong Kong”

Dr. Warren Larson and his wife Carol, who now live in Metro Vancouver, served for 23 years in Pakistan with Christar. He is a faculty member of the Seminary and School of Ministry at Columbia International University. Due to his understanding of radical Islam, he has been quoted widely in both Christian and secular publications. Dr. Larson is the former Director of the Zwemer Center.

This article is re-posted by permission from the Zwemer Center for Muslim Studies.

For some earlier Church for Vancouver articles on similar themes, go here.
Share this story

← Around Town: The Creator’s Sacrifice, HAW grants, Time in the Trees . . .
InCommon: reimagining church properties for the common good →