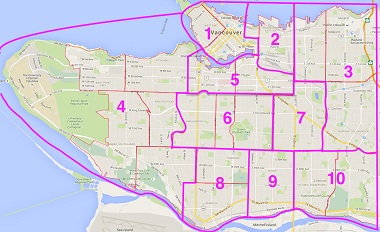 The Vancouver Consultation kicked off in January and February by bringing together pastors and non-profit executives into nine focus groups based on which part of the City of Vancouver they ministered in.
Out of the 309 congregations and 122 ministries we were able to identify, 103 sent at least one representative. That participation rate impressed us all the more because fully one-third of congregations worship in a language other than English and thus weren’t likely to respond. (One of the major barriers to cooperative local mission is this very fact that we can’t easily communicate with each other.)
If you had to prove that God is alive . . .

During these two-hour sessions, we asked participants to prayerfully reflect on two questions. First, “If you had to prove that God is alive and active in your neighbourhood, where would you take people to show them? That is, where do you see signs of hope and deep flourishing, evidence of what God is doing in your church/ministry and neighbourhood?”

The signs of hope spanned an intriguingly wide spectrum, from a striking surge in church planting and new forms of effective evangelization on the downtown peninsula, to examples all over town of working across denominational lines to assist vulnerable neighbours.

We were struck by how many of the signs were expressions of radical hospitality, not just “client services.” We also sensed that most participants were not used to looking for signs of God’s activity outside the institutional church.

What is holding back Jesus’s kingdom?

Second, we asked participants to describe what is holding back Jesus’s kingdom, to name the main spiritual and social challenges facing their people and neighbourhoods: the primary idols, injustices, wounds. Interestingly, here the responses converged rather than spread out.

They boiled down to a crippling lack of margin in people’s lives to connect meaningfully with others or even to sort out fundamental issues of identity and purpose.

Exorbitant costs of living ramped up by greed, together with linguistic and cultural barriers (not least between generations within immigrant families) and a pervasive market/consumerist mentality lead to fear, quiet despair, loneliness and a drive for self-distraction (video games, status “toys,” sex, outdoor adventure, etc).

This translates into neighbourhoods emptying out of moderate and low income residents as well as of a sense of community. Churches are experiencing this too. Pastors expressed a strong current of anxiety – even among larger established churches – about future stability and vitality, when so many young families have to move away and when neighbourhood demographics shift away from their congregation’s.

At the City Summit November 24 – 25 (see accompanying articles), we will ask the Vancouver Consultation’s ultimate question:

In light of where we see God on the move in the face of these challenges, how is the Holy Spirit prompting us to learn from and work with each other and with people of good will to catalyze God’s shalom in this city we love?