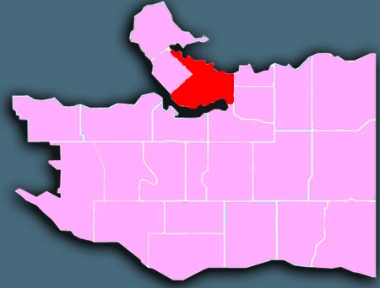 Sharing a peninsula with Stanley Park and the West End in the north-central part of the city, Downtown is bounded by Burrard Inlet to the north, False Creek to the south, the West End (along Burrard and Georgia) and Stanley Park are to the west, and the Downtown Eastside to the east. 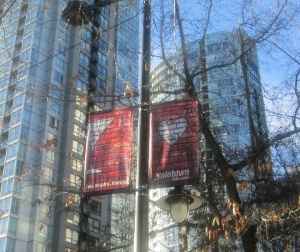 Half the residents are between the ages of 20 and 39 (the second youngest median age in the city). Young families have arrived in numbers that have overwhelmed local schools and child-focused services. About three-quarters of residents have moved in the past five years. The new towers mask a higher than average poverty rate; with low income tenants living in social housing and Single Room Occupancy hotels.

Several language groups in the city – Persian, Korean, Arabic, Russian, Serbian – are overwhelmingly located in Downtown (and the West End). 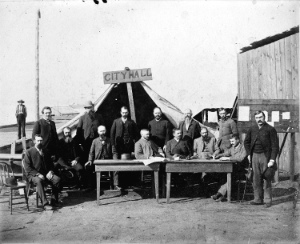 City Council members and officials in front of ‘City Hall’ after the fire of 1886. Vancouver Archives: AM54-S4-: LGN 456

Whoi Whoi and Chaythoos were Indigenous villages in what is now Stanley Park, while settlers from Hawaii lived in Kanaka Ranch on Coal Harbour just outside of the Park. There was also a settlement on the original site of Vancouver, in the northeast section of Downtown.

In 1867, Joseph Trutch, BC’s chief commissioner of lands and works, refused to recognize Indigenous reserves and had them reduced. Three years later he denied the existence of Aboriginal title.

Incorporated in 1870, the young city changed its name from Granville to Vancouver in 1886. The years 1886 and 1887 were traumatic. Just two months after the name change, on June 13, a fire raced through the city, destroying at least 1,000 buildings; virtually nothing was left.

Early the next year (February 24), according to Chuck Davis, in his History of Metropolitan Vancouver: 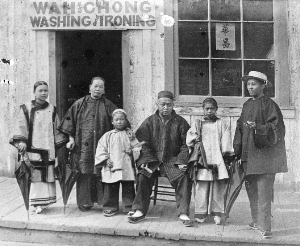 The Wah Chong family outside their laundry business on Water Street in 1884. Vancouver Archives: AM54-S4-: SGN 435.1

The Vancouver Anti-Chinese League held a meeting in reaction to the rumour that hundreds of Chinese had landed in Vancouver. When 24 Chinese arrived from Victoria, a crowd of 300 to 400 whites marched through the snow to the Chinese camp at the western end of Coal Harbour. To escape the onslaught, some of the Chinese jumped into the icy water and the rest were chased onto the CPR right-of-way without shelter Not satisfied, part of the mob returned to Vancouver and set fire to some of the Chinese buildings on Carrall Street. These and other disturbances led to the suspension of the city charter and the dispatch of special constables from Victoria.

Business: Downtown is the business and financial centre for the whole of British Columbia. Vancouver’s financial district is home to headquarters of forest products and mining companies, banks, financial institutions, law and accounting firms. But it encompasses far more than that, containing uses as diverse as higher education, government and diplomatic offices, culture and fine arts, entertainment and shopping, sports and extremely dense residential blocks. 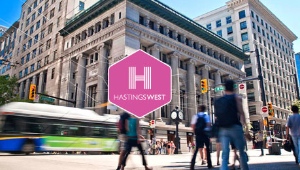 Hastings West is one of several areas of focus for the Downtown Vancouver Business Improvement Association.

Diversity: What makes the neighbourhood all the more remarkable in comparison to most other metropolitan cores is the degree to which all these uses are jumbled together. Toronto’s and New York’s financial districts, for instance, are virtually deserted outside of business hours. Such diversity situated between pedestrian-oriented waterfronts makes for a relaxed cosmopolitan vibrancy that has rightly become world-famous.

Social Isolation: In 2012 the Vancouver Foundation set out to discover what issue people in Metro Vancouver care about most. Its report pointed out: “What people said concerned them the most was a growing sense of isolation and disconnection. They said we live increasingly in silos, separated by ethnicity, culture, language, income, age and even geography.” The Foundation’s public survey identifies these key gaps:

These trends are particularly true among young adults who live in the towers of Yaletown, False Creek and Coal Harbour.

There is very little provision for religious buildings in the Downtown area, due mostly to the fact that much of the area was master-planned in large parcels by private developers. 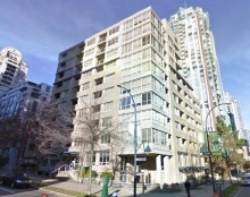 The Wellspring is one of three buildings operated by the 127 Society for Housing, initiated by Christ Church Cathedral.

Here are a couple of ways in which Downtown churches are linked to their neighbourhood. We would love to hear about other examples:

* Christ Church Cathedral parishioners started the 127 Society for Housing in 1981; it owns and operates three affordable housing projects with 262 units in Vancouver’s Downtown South. The church also offers free sandwiches, soup and coffee from its premises throughout most of the year. 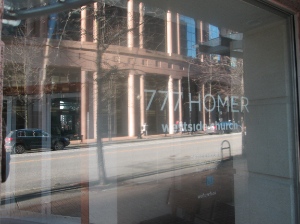 Westside Church is right across from the Central Library.

* Westside Church, across Hamilton Street from the Central Library, undertakes three Bridging the Gap ministries: Dinners of Love are a monthly dinner hosted at the Russian Community Centre on 4th Avenue. The Melting Pot “has a two-fold purpose: to serve a hot meal, in this case soup, to anyone who is hungry in the area around The Centre; and to serve the guests who come through The Centre’s doors in such a way that ministers to their spiritual hunger.” The Pantry supports Dinners of Love, and The Closet, a clothing ministry.

* The Courier did several articles on Downtown as part of a year-long series of articles on Vancouver neighbourhoods in 2013/2014.

* The City has a Downtown page.