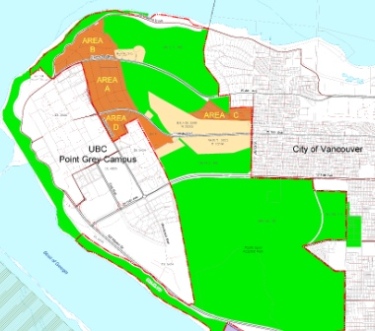 The University Endowment Lands (UEL) and the University of British Columbia (UBC) occupy the westernmost tip of the Burrard Peninsula, west of the City of Vancouver (divided by Blanca Street north of 16th Avenue and Camosun Street south of it). The whole peninsula is on traditional and unceded Musqueam territory.

The UEL is an unincorporated community administered directly by the provincial government; it is not part of the City of Vancouver, though it is part of Metro Vancouver. It includes Pacific Spirit Regional Park. UBC, which is consistently ranked among the 40 best universities in the world, is almost a city unto itself, with almost 1,000 acres at its disposal.

From Statistics Canada, 2011 Census (comparative data for the Census Metro Area in parentheses).

Low- and mid-rise apartment buildings (student housing, private rentals and condos) comprise three-quarters of the dwelling units. Less than one percent are detached houses, mostly luxury homes on large plots, clustered on the northeast side of the main campus.

The area consistently registers a high percentage of low-income households; however, these numbers are skewed by the presence of so many low-earning students.

After marching on the Great Trek in 1922, students formed the letters ‘UBC.’

The University Endowment Act of 1907 set aside two million acres of crown land to be sold or leased to fund a new university. The UEL was to be located in the Cariboo region, but its current site was chosen in 1911, after that location was named in 1910 as the future campus for the fledgling University of British Columbia.

Chuck Davis described the famous Great Trek out to the current site of UBC in his History of Metropolitan Vancouver:

Students at the University of BC, frustrated over endless delays by the provincial government in moving them out to their new (and uncompleted) campus at Point Grey, took part in the “Great Trek” [October 28, 1922].

Nearly 1,200 of them, angry at having to study in the big and drafty “Fairview shacks” on Willow Street, paraded through downtown Vancouver streets – led by the band of the Irish Fusiliers. The students then boarded streetcars to take them to Alma Road (now Alma Street) and the gates of the campus. The male students boarded Broadway West streetcars, while the women went on 10th Avenue cars.

They continued their procession along the dirt trail that led through the forest to the unfinished site, joined forces at Point Grey and formed a huge “UBC” with their bodies for the benefit of photographers.

The government responded by authorizing a $1.5 million loan to resume construction. But it was still 1925 before the students could finally move in.

The first residential lots were also sold by public auction in 1925, marking the beginnings of a residential community in the UEL.

Development: The UEL is implementing a controversial Official Community Plan to rapidly build out much of its remaining developable land, partly for research and related facilities, but mostly for market and student housing. The speed at which they are doing so is attested by the latest census figures: between 2006 and 2011 the population on UBC grew by over 19 percent and on the UEL by nearly 15 percent.

About 4,000 residents live on UEL property.

Pacific Spirit Regional Park takes up well over half of the UEL’s 3,000 acres. Most of the rest of the UEL (apart from UBC) is a residential area, but there are two commercial centres. 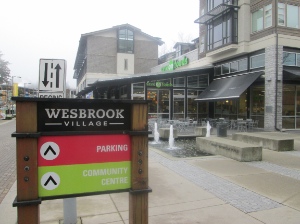 The site of Wesbrook Village, south of the UBC campus, was bush until recently.

Shopping: University Village near the corner of Wesbrook Mall and University Boulevard, has been the main shopping area in the UEL for many years. Right beside it, completed in the early 2000s, is University Marketplace, which offers a mix of commercial and residential units.

A much more recent addition is Wesbrook Village, at the southern end of the campus. This mini-community near 16th Avenue and Wesbrook Mall has sprung up around a Save-On-Foods, a bank and a number of other small shops, surrounded by condos. 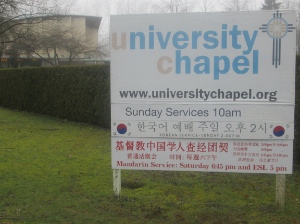 * The Courier did several articles on UBC as part of a year-long series of articles on Vancouver neighbourhoods in 2013/2014.

* The University Neighbourhoods Association (UNA) approximates a municipal council for the local areas on campus.