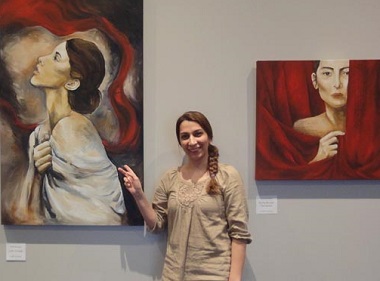 The paintings of women in ‘Song of Salvation reflect the faith experiences of Iranian-born artist Violet Behzadian. Photo by Marion Van Driel.

Regent College’s Lookout Gallery will host the works of gifted artist Violet Behzadian in her first Canadian show, ‘Song of My Salvation.’

Fifteen acrylic paintings depict women who reflect Behzadian’s own story of grace. An opening artist reception will be held February 22, 4:30 – 7:30 pm, with the show running through March 23.

Bev Bandstra, former Regent staff member and initiator of the exhibit, reveals that the show’s timing correlates with International Women’s Day March 8, with the theme, “Be Bold for Change” celebrating women’s achievements and encouraging the goal of gender parity. The theme fits well with Behzadian’s story.

Just over three years ago, Violet (Banafsheh) Behzadian came to Canada as a refugee, along with her husband and son, to start a new life. Behzadian lived in Iran, teaching art and architecture at the Universities of Tehran and Zanjan between 2003 and 2009.

After becoming a Christian in 2006, her teaching began to reflect her Christian beliefs. Although her teaching wasn’t overtly Christian, she starting including elements of Christianity – expanding the study of mosque architecture to include churches, as an example.

She was given a leave of absence along with the Qur’an and other books to read during her time away – a suggestion she rejected. Behzadian’s job ended when it became apparent that she would not renounce her Christian faith.

After her husband was questioned, and later imprisoned and brutalized in an attempt to bring him back to the Muslim fold, the imminent danger immobilized them. They fled to Turkey with their young son, where they resided for two years before finding their new home in Ladner. Since becoming Canadian residents, they have been gifted with a beautiful young daughter.

The full story was published in the Oct 2015 edition of The Light Magazine.

Today, Behzadian is grateful for this new life in God’s grace, and she wants that to come through in her art.

“Each (painting) is a reflection of my own experiences in my walk of faith,” she reveals.

Several paintings in this series include Hebrew (Old Testament) or Greek (New Testament) inscriptions of scripture text, adding an esoteric element. While creating art has always been important to her, today it is a testimony of Behzadian’s love and faith in Christ, a response of thankfulness for her salvation.

She explains, “I believe every aspect of my life is under the influence of His love. My goal is to glorify the Lord through my art, which belongs to Him.”

Behzadian and her husband share a passion for others – especially the Muslim community – to know Christ.

“God’s will is salvation for all the nations to turn from darkness to the light,” she says. A portion of proceeds from the sale of these paintings will be used for evangelism efforts in Iran.

This article first appeared in The Light Magazine.