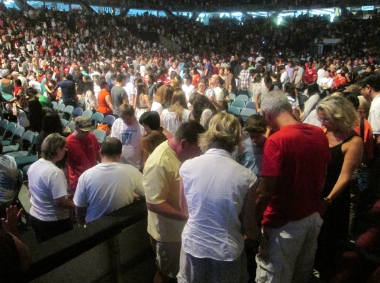 The Pacific Coliseum became a house of prayer during Voices Together.

Emerging from the Pacific Coliseum and looking towards the North Shore mountains hazy in the late evening sun, I felt thankful to be alive in a city where God is so clearly at work. I had just spent three hours on the evening of Canada Day at Voices Together.

Thousands of Christians (one guesstimate from the stage was 10,000) from all denominations, from all over Metro Vancouver, worshipped and prayed together.

There were several highlights, but as I am writing this late on the same evening – so that I can include this story in my weekly update – I will restrict myself to brief accounts of a few elements that struck me as particularly memorable. 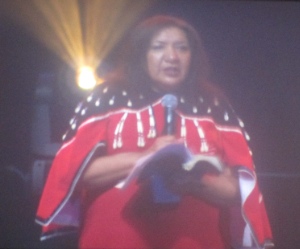 Toward the beginning of the evening, Lynda Prince, a former Grand Chief of the Carrier Sekani Nation in northern BC, said: “20 years ago I refused to stand when they sang O Canada – but today I stood.” She said, “We say welcome to Canada; we as the First Nations have released forgiveness to the nation. We release and forgive.”

Later, setting up a time of prayer for First Nations people, she pointed out that 2014 Stats Can figures confirm that Aboriginal people are the poorest in Canada because of government policies. She asked the ‘congregation’ to pray that those policies will change so her people can share in the nation’s prosperity. She also asked for prayer for the high rate of suicide on reserves.

“Every atrocity we suffered was done in the name of Jesus Christ,” she added. “Only three percent [of Indigenous people] have a saving knowledge of Jesus Christ. We pray that the Lord will reveal himself to our people.”

The gathering was warm and responsive to Prince’s comments, and many prayed fervently for Canada’s First People. Dave Carson, a key Voices Together organizer, and one of the hosts, said in response: “I believe we’re touching the heart of God for our nation.”

How Great Thou Art 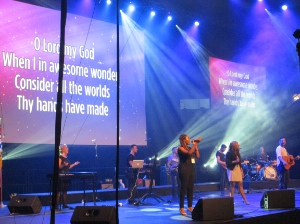 Worship Central led several songs, including How Great Thou Art.

Singing a great hymn with thousands of fellow believers was a treat. The Worship Central band led several upbeat songs – all good – but the largely a capella version of ‘How Great Thou Art’ was special:

O Lord my God, When I in awesome wonder,
Consider all the worlds Thy hands have made;
I see the stars, I hear the rolling thunder,
Thy power throughout the universe displayed.

One could not help but think of the beauty surrounding the Coliseum, and the good fortune enjoyed by the nation whose birthday we were celebrating – but also, and particularly, about the source of our good fortune. 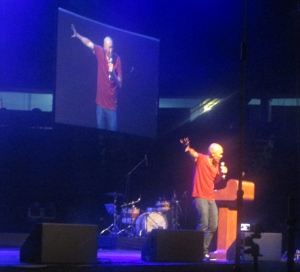 Francis Chan was passionate about the significance of unity for the church.

Francis Chan spoke for about 20 minutes and was very well received. His talk was passionate, reverent and plain-spoken. He began by saying, “We’re real good at rallies like this, but where is the action?” His main challenge was to take God seriously – to remember that he is watching us at every moment and to take his word at face value.

Chan, a popular author and pastor from the San Francisco area, recounted a story of meeting a man coming out of a halfway house, just out of prison. It turned out he, his wife and three children had nowhere to stay. Chan felt nervous about the man – large and tattooed – but he and his wife (and their seven children!) offered the family a place to stay. That man is now a pastor, in ministry with Chan.

“The church was supposed to be known for its love,” Chan said.

He asked the rhetorical question: “What if Vancouver was the one city where, when God looks down, he sees pastors praying not for their own church but for the other church.”

Chan referred to the oft-quoted passage on Christian unity, John 17:20-23: 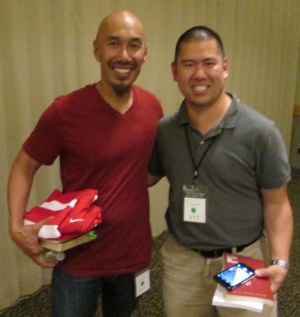 Francis Chan (left) with Clayton Imoo, Director of the Office of Youth and Young Adult Ministry the Roman Catholic Archdiocese of Vancouver, just before Voices Together.

He said that for years he had missed the significance of two phrases: “even as we are one” and “so that the world may know.”

He asked: “Do you think the Father and Son are pretty tight? . . . Have you even dared to believe that could happen?”

Voices Together “is a great start,” he said, “but Jesus is saying, ‘I want more than that.'”

He said the phrase “so that the world may know” always confused him – how, he wondered, would our unity show people who believe in all manner of alternatives to Christianity, or nothing at all, that Jesus is the Messiah? He’s still not sure, but “Somehow we’ve got to start trusting the word of God. . . . If you want to reach people, here’s your best shot – try unity.”

Chan then prayed for the gathering and for Vancouver: 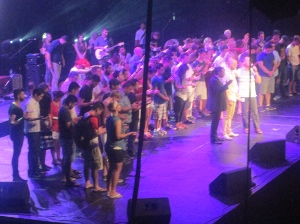 Young leaders were prayed over by senior city leaders. 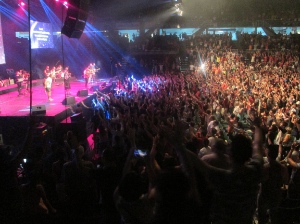 We spent about 20 minutes praying in small groups, for Canada, for First Nations, for the city. That was a good opportunity to interact with people we didn’t know.

The Faith Chinese North American Baptist Church Choir did a great job on a couple of hymns.

Two dance groups livened things up  – quite different, both talented.

Youth leaders were called up on stage to be recognized and prayed over by senior church leaders.

The Chapel Band ended off with a bang; young people were called to the front and danced to the music.