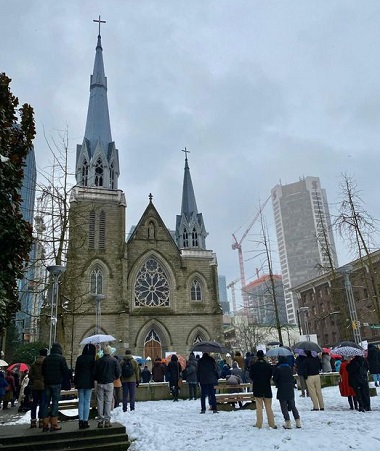 The Supreme Court of British Columbia will begin a judicial review of a challenge to current public health orders related to the pandemic next Monday (March 1).

The Justice Centre filed the challenge on behalf of more than a dozen individuals and faith communities, including three Fraser Valley churches.

In preparation for the hearing, the provincial government and the petitioners have been filing affidavits with evidence and expert opinions.

On February 2, for the first and only time since the start of the COVID-19 pandemic, the province released the specific number of cases associated with religious settings in BC: 180 out of 71,461 cases or less than ¼ of 1%.

In the Vancouver Coastal Health region, only 61 of 16,450 cases were associated with a religious setting. In Fraser Health Authority, the epicentre of the COVID-19 pandemic in BC, a mere 59 of 42,434 cases. And after literally thousands of worship services carefully conducted according to guidelines on Vancouver Island, zero cases.

Here is a summary table:

By comparison, the Big White ski resort cluster alone is responsible for 240 cases. The Whistler resort complex had over 550 cases between January 1 and February 2. Acute and long-term care facilities in the province have tragically recorded over 5,197 cases and 872 of 1,218 deaths.

In 700 pages of affidavits and exhibits, Dr. Emerson provided no other specific data to compare against these miniscule religious setting numbers.

The effect of this lack of information is to deliberately inflate the reader’s perception of the significance of the few cases recorded from religious settings.

In response to an FOI (freedom of information) request, the BC Centre for Disease Control (BCCDC) sent me a brief report on the number of cases associated with gyms and fitness facilities in BC. This was the first and only time they have released this information; I received it February 24.

This is a rate four times higher than that reported for religious settings. Gyms and fitness facilities are still open.

Attesting as an expert witness submitted by the three churches in the case, Dr. Joel Kettner – formerly Chief Medical Officer of Health and Chief Public Health Officer for the Province of Manitoba for 12 years – responded to Dr. Emerson’s submission in an affidavit February 9.

He observed the difficulty of making any kind of assessment of the public health orders in the absence of transparent information. His sworn statement:

. . . In neither of these reports could I find any details of the methods and content of the models. . . . Without transparent descriptions of these models, there is no opportunity for other experts to appraise them critically. Without transparent explanations, there is no opportunity for non-experts to understand them. (para. 59)

. . . In neither of these reports could I find any data or information specifically about settings of spiritual or worship practices. (para.60)

. . . In my opinion, permitting places of worship to open and apply similar restrictions expected of other settings would enable their members to gain the potential benefits of worship and support – many of which are not otherwise available at this time – in an environment at least as safe as other public settings. (para. 76)

These words are powerful expert condemnation of the lack of evidence for the government’s current policy which the Court no doubt will consider with care.

As public concern about COVID-19 information transparency has mounted through December and January, the government has doubled down on its strict non-disclosure policy. On January 14, the Premier referred to the potential to create “hysteria.”

Provincial politicians and officials have publicly referred to the potential dangers of “scapegoating.” One wonders just how low an opinion of the people of the province the government has? Pretty low I presume. Some would say that the scapegoating is already underway, driven by the government’s own actions.

Here is an important portion:

[T]he B.C. government’s unequally-applied public health policies are inadvertently contributing to a growing level of prejudice, negativity, suspicion and distrust in our society that is directed towards not just Christians, but religious people in general.

What public perception is fostered by the fact that religious organizations have had stringent limitations imposed on them that severely undermines their ability to operate, while pubs, restaurants, businesses, gyms and group exercise classes continue to operate?

It potentially suggests that the government sees religious organizations and individuals as less trustworthy or as less likely to follow COVID-safety protocols, or even that religious persons, far from being valuable allies in the fight against COVID-19, are part of the problem.

My impression of the last 11 months is that the people of our province have been calm, brave and resolute, not hysterical or searching for others to blame. These comments of the Premier and Minister of Health clearly reflect a distrust of the public.

Also, there is a considerable amount of non-controversial information that the government is careful not to discuss or disclose.

In the United States, 18 states currently provide quite detailed exposure setting data on their websites. One could literally provide pages of links to information sites from the governments of the United Kingdom, Singapore, South Korea and others.

However inadvertently, the current government policy of closing religious services entirely, while not providing any reasonable evidence for so doing, dissolves public trust and is creating a narrative of suspicion about religious British Columbians.

It is past time for the government to follow the evidence and treat religious settings the way they treat indoor exercise providers. They should work with religious organizations to re-open safely, following the established or enhanced protocols which prevent the spread of the virus.

Anthony Roy is a member of Saint Barnabas Anglican Church in Victoria.

← Love Perseveres: Inner Hope’s stories from the journey
BC Christian Leaders Survey on the BC government’s response to COVID-19 →

5 comments for “Where is the evidence to support the closure of religious worship in BC?”