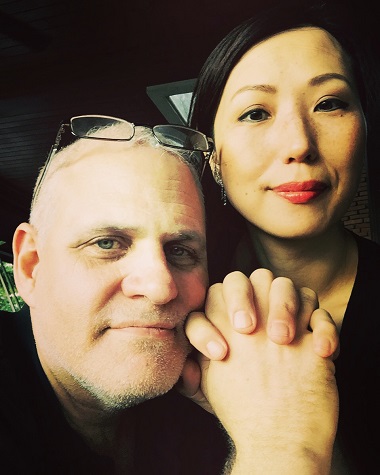 Matt Friedman and Sylvia Yu Friedman will address the issue of slavery in the modern world at Tenth Church.

Following is an excerpt from Matt Friedman’s new book, Where Were You?: A Profile of Modern Slavery.

Twenty years ago, Gita asked me “Where were you?”1 That day, she called us all out and asked why the world didn’t help her and other girls in slavery. Throughout the world, there are millions of people in forced prostitution and forced labor who repeatedly ask this same question every day.

I am continually reminded of Gita’s angry challenge to me and others like me. We fail to protect our innocent children and young adults. Why do we not care enough to do everything possible to end rape and slavery?

After nearly 30 years in the field doing this work, I am considered an expert. However, to this day and at this moment, I cannot answer Gita’s question: “Where were you?”

This testimonial reflects a scenario that takes place every five seconds as another young person becomes a slave:

I was only 15 years old when I was sold to the brothel. I was so young. I didn’t know anything. I was innocent then. My parents were tricked by a neighbour into thinking I’d be working at a restaurant as a waitress in the city. I wanted to go. I wanted to help my family. I was willing to work.

But this is not what followed. After walking through the jungle and crossing the border on a night boat, a van took me to a bad place – a place where girls like me were sold like animals to the owner. When they told me what I was supposed to do with men, I said no, never. I fought back. But that didn’t stop them.

They abused me and tortured me for days until I had nothing left to give. I no longer had control of my life or my body. I belonged to them. Every night I was with up to 10 different men, seven days a week, 365 days a year. For years, this was my life. Now at 18, my body is frail from the illnesses. I feel completely empty inside. 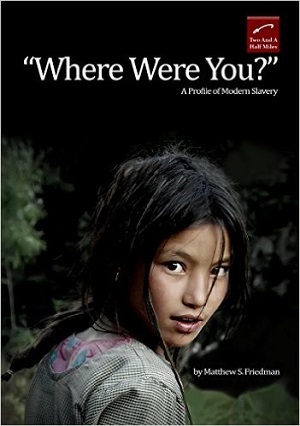 People ask me what happened to Gita. I honestly don’t know. I never heard from her again. Sadly, I have to assume she died of HIV/AIDS along with the hundreds of women and girls I met who were forced to have sex in those brothels. But her question didn’t die. It lives on today.

If you have read this far, it means you will help answer Gita’s question. You realize you can help end slavery. As famous English abolitionist William Wilberforce said, “You may choose to look the other way but you can never  say again that you did not know.”

An American woman, incredulous at the information this book exposes, said it brought her a vivid flashback to a scene more than 50 years ago. Her seven year old son ran into the house after school, red-faced and sobbing so hard she thought something terrible had happened to him. She wrapped her arms around the child and tried to calm him.

When he could speak, he cried out, “Where were you when Hitler killed the Jews? Why didn’t you stop him?” She explained to the child that those events happened far away and she was a child his age and could not have stopped him. “Where was grandmother?” he cried.

“Far away from what was happening, and they didn’t print stories like that in the newspaper. We didn’t have television then; we just didn’t know,” she added.

The memory still pains her because she was helpless to assuage the child’s grief and clearly he did not accept her words as anything more than excuses. Today the woman asks if Hitler killed six million people and the world remains revolted by that bestiality, why don’t people rise up today when the United Nations says 36 million people worldwide have become slaves?

The estimates are real and growing, I assured her. The woman could hardly grasp the fact that North America alone has hundreds of thousands of young people in slavery. The child waiting for a school bus, the teenage runaway, the young woman offered a modeling job in a far country all vanish with only local notice. 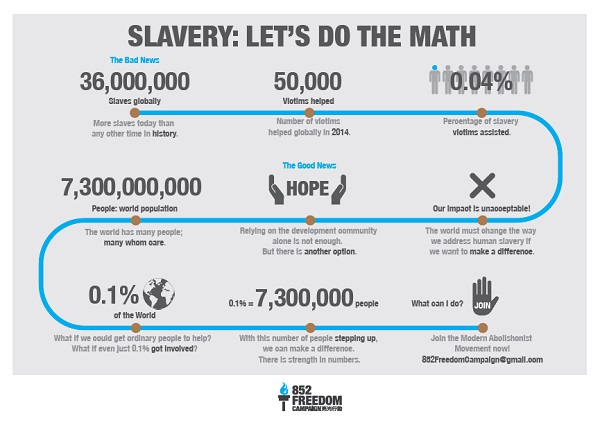 Even as the internet helps us track down criminals and rescue a few victims, it equally facilitates criminal activity. In most cases, the lure is love or money. Young people want to secure better jobs and too often believe what they read on the screen. Young women in many countries want western husbands and offer themselves to strangers. The advertisements are convincing, the young people eager to improve their situations, and hardly anyone can intercept the traps.

If the Holocaust nearly a century ago remains on the world’s conscience, why have we not cared that today six times that number of young people, even children, have vanished into brief lives of unspeakable cruelty, exploitation and deadly disease?

Slavery has existed as far as history has recorded the human race. The only thing new about the issue is the speed and deadliness of its proliferation. While hardened businessmen make billions of dollars and unaware citizens throughout the world purchase their slave-made products, the numbers of children and young adult slave victims now exceeds the population of Canada.

Throughout the ages, voices have been raised to greater or lesser effect. Perhaps it’s children’s voices that will pierce through our excuses, that of the child who demanded “Where were you when Hitler killed the Jews?” or the uncomfortable question from Gita, who demanded of me “Where were you? You sit there interviewing people and writing reports. What good is that? I waited and hoped that someone would come help me. Where were you?”

Thousands of years ago, Moses demanded of Egypt’s Pharaoh, “Let my people go!” As America’s president, Abraham Lincoln, the Great Emancipator, said before Congress: “In giving freedom to the slave, we assure freedom to the free – honourable alike in what we give and what we preserve.”

Like Lincoln, and those who fought with him, each of us must become an abolitionist. The passion for freedom exists and remains through every generation and must become strongest throughout the world at this time. If each one of us becomes an abolitionist, perhaps one day millions of freed people can shout the unforgettable words of Dr. Martin Luther King, Jr.: “Free at last, free at last; thank God Almighty, we are free at last.”

You and I must become abolitionists. Together, let us answer the question Gita and 36 million other young men and women, boys and girls urgently asked yesterday and today: “Where are you?” We are here, we have heard, and we must act!

1. To collect the information I needed for Captive Daughters, I visited a range of shelters located in Nepal. . . .

While nearly all of the girls I approached agreed to tell me their personal stories, one 15-year-old named Gita, repeatedly declined my requests for an interview. Every time I approached her, she withdrew angrily. But during all of my interviews in her shelter, she sat off to one side and listened to everything being said.

On the last day of my visit to this shelter, Gita finally came up to me and said she had changed her mind; she would give me an interview. Everyone was surprised. I thanked her and asked her to sit down on one side of the table. Three others sat on the other side.

Over the next three hours, Gita described one of the most gut-wrenching testimonials I had ever heard. It was filled with deception, rape, torture, murder, disease, and so much more. It seemed to me that she had suffered the worst of everything times ten. Having spoken with hundreds of other girls, I thought I had heard everything. But this description was almost beyond belief.

At the end of the interview, I sat there speechless. After an extended pause, I thanked Gita for sharing her astonishing story. There was another pause. Her eyes had this piercing gaze, full of a combination of pain, sorrow, and anger. I couldn’t distinguish which emotion was the most prevalent. Not knowing what else to do, I finally said, “Wow, you must be so angry at the traffickers for all of the terrible things they did to you.” I then waited for her confirmation of this seemingly obvious statement.

Instead, Gita looked accusingly at me and the others in the room. Her eyes blazed. “No, I am not angry at the traffickers, I am angry at you!” she shouted, pointing her finger at each of us in turn. “Where were you when I was in that terrible brothel? I sat in that brothel every day waiting for someone to come and save me. I knew that everything happening around me was illegal and wrong. I went to school until I was 12. I knew it was slavery. Where were you and everyone else when I needed you?” She paused and took a few deep breaths. Tears began to fall from her face.

“Why are you sitting here?” she added. “Why aren’t you down there helping 31 my sisters? They are in the same situation I was in. Everyone knows what is going on. Everyone knows it is wrong. Why is no one helping them? How can such terrible things happen without anyone doing anything? I am not angry with the traffickers. They are just bad people doing what they do— bad things. I am angry at the good people, society, you! Where were you? Where was everyone? Why did no one help? Why does no one care?”

That day, a survivor spoke for herself and for so many others. She “called us all out,” asking the fundamental question: “Why doesn’t the world care enough to stop this crime against humanity?” It was a profoundly relevant question then and remains so today.

Matthew S. Friedman is an international human trafficking expert with almost 30 years of experience as a manager, program designer, evaluator and front-line responder. He currently serves as chief executive officer of The Mekong Club, a consortium of Hong Kong-based private sector business leaders who are pledged to help fight human trafficking in Asia.

Sylvia Yu Friedman is a Hong Kong-based award-winning Canadian journalist, TV anchor, documentary producer, book author and advisor to philanthropists. Sylvia is the author of Silenced No More: Voices of Comfort Women. She attended Tenth Church while she was living in Vancouver.

1 comment for “Where Were You?: A Profile of Modern Slavery”