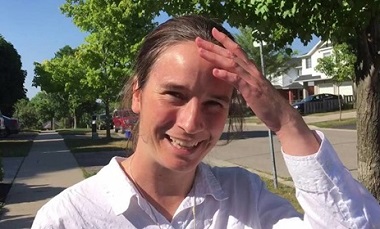 Mary Wagner was recently released after spending four months in jail awaiting trial. This image from the ‘Friends of Mary Wagner’ Facebook page and accompanied a letter thanking supporters in The B.C. Catholic.

100,000 #ClimateStrike marchers in Vancouver is impressive. It’s also the number of unborn lives lost to abortion last year in Canada. How many might have been another #GretaThunberg? #ClimateStrikeVancouver

Good point, in my view. He’s not putting down the young activist or the movement that has grown up around her. (Check out the accompanying Around Town column, which points out that the ‘Voting as Catholic’ Federal Election Guide places climate change first on the list of issues to address.) But he does put the phenomenon in perspective.

In reading his tweet, I thought back to a column by Schratz’s colleague at The B.C. Catholic, who wrote about a humble Christian who deserves the kind of accolades being showered upon Greta Thunberg.

Maybe you have been to court before. I have not. In nearly seven years of Catholic journalism, I’ve spent time at press conferences outside of courtrooms, but not in them.

The grim-looking cement block that is the Provincial Court of B.C. is not one I have spent any time in – until recently, when I was assigned to cover the sentencing hearing for pro-lifer and serial offender Mary Wagner.

Wagner is a woman I have written much about, but met in person only once before her sentencing September 11. She sat on a chair: silent, still, hair pulled back in a low ponytail, expression calm.

It was not Wagner’s first time in court, not by a long shot. She has spent the better part of the last decade behind bars, a hardened criminal sentenced many times in courts across the country.

Her crime? Entering abortion clinics to hand out roses and ask women what financial or other help she could offer so they wouldn’t go through with the procedure.

Wagner didn’t shout slogans or wave signs. She didn’t touch anyone, block doors, tie herself to anything, or make a scene – unless you consider handing out free roses a public disturbance. Yet, in Canada her actions were enough to have her arrested by police, jailed and forced to face a judge. She did, after all, walk into a secure building without an appointment.

I may be a newbie in the courtroom, but even as I fumbled with when to sit, stand or speak like someone at Mass for the first time, I recognized Wagner’s case is an extraordinary one. Judge Mark Jette said as much during the sentencing hearing. 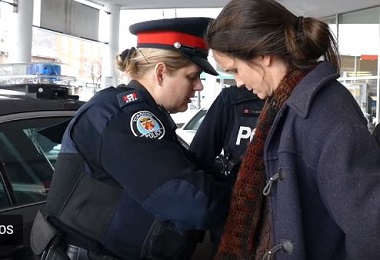 Mary Wagner has submitted herself to many years of incarceration in order to protect human life.

The judge found Wagner guilty of mischief and trespassing at Everywoman’s Health Centre in Vancouver April 17. (The arresting police officer had been unfamiliar with BC’s “bubble zone” law and so she was charged with different offences than she typically is.) She’d been locked up since that day, and so, having spent more time behind bars than the maximum sentence for her crime, was set free the same day she was sentenced.

“You are not the sort of person we usually deal with in the courts,” Jette said during the proceedings.

Wagner isn’t mired in fraud or drug trafficking or other crimes many accused people who enter the provincial court are mixed up in. She is a pro-life woman with convictions that run so deep she enters abortion clinics with the urgency of someone who has learned a human life is in danger and dashes in to see if she can save it.

Though the judge found her guilty under Canadian law, he recognized Wagner’s actions come from her heart. When the Crown attorney asked for 30 hours of community service and a three-year probation, the judge gave her two years of probation and said he saw no reason for her to do community service.

“I’m satisfied that you are somebody who gives back to the community on a daily basis,” he told Wagner. “It’s in your DNA.”

That was an extraordinary statement indeed, her lawyer Peter Boushy told me afterward. “You rarely hear a judge compliment an accused person.”

During the hearing, Boushy told the judge that Wagner has a loving family to lean on after her release. Her parents, Frank and Jane Wagner, live on Vancouver Island and have raised seven biological children, five adopted children, and four foster children. 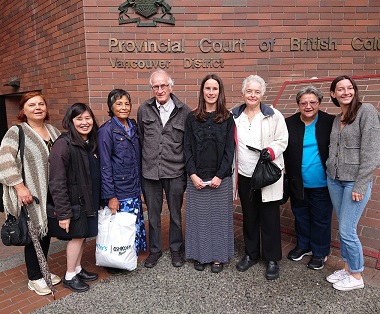 Mary Wagner with supporters, including her father Frank, outside the courthouse.

Frank and Jane took turns witnessing Wagner’s appearances in the courtroom, along with about a dozen supporters, for three days. Frank said he had hoped the judge would find her innocent.

Mary tries to “protect the babies from imminent death,” he told me. “It’s like accompanying Jesus to his crucifixion. She wants to be there with them until the time they are being killed.”

When Wagner had a chance to share closing remarks, she said something I’m sure few accused say. She was glad she was found guilty:

This conviction is nothing I am ashamed of. On the contrary, I am pleased that the court has found there is enough evidence to conclude that I interfered with the business of destroying helpless unborn children, who remain unprotected and abandoned by the court.

Civil disobedience, Canada’s abortion ‘bubble zone’ laws and the effectiveness of Wagner’s in-and-out-of-prison strategy can be debated for a long time. But what was not up for debate in that courtroom was Wagner’s heartfelt convictions, her deep belief in the humanity of the unborn and her care for the vulnerable. The judge himself insisted there was no need to give her community service and acknowledged she came from a good family.

Wagner supporter Carl Wolkenstein said it is true that community service is in Wagner’s DNA, as the judge said. “That’s the same DNA that she’s had since she was in her mother’s womb,” though it seems Canadian law has yet to recognize that.

Agnieszka Ruck writes regularly for The B.C. Catholic; her comment is re-posted by permission.

Several events of interest to pro-lifers are coming up:

Anyone who would like to see a Federal Election Debate from a Catholic Perspective could stop by the John Paul II Pastoral Centre this afternoon (October 3) for a live broadcast of the Archdiocese of Toronto’s first-ever federal election debate:

Representatives from the major parties will discuss plans for addressing issues of importance to Canada’s Catholic community, including poverty, life issues, Christian persecution, political discourse, and climate change. The event will be followed by brief comments on the urgency of civic engagement by civic affairs proponent Marc Vella.

The debate will be streamed live, starting at 4:30 pm.

The annual Vancouver Life Chain will take place October 6, 2 – 3 pm, at BC Women’s and Children’s Hospital along Oak St. at 29th Avenue (outside the bubble zone):

All church and pro-life groups and individuals are invited to help make this a large grassroots movement in solidarity with other Life Chains across North America. Please arrive 15 minutes early to find parking and be in position by 2 pm. Feel free to bring a chair if necessary for the elderly and infirm.

There are other Life Chains in the area; go here for a list.

Unplanned at The Orpheum 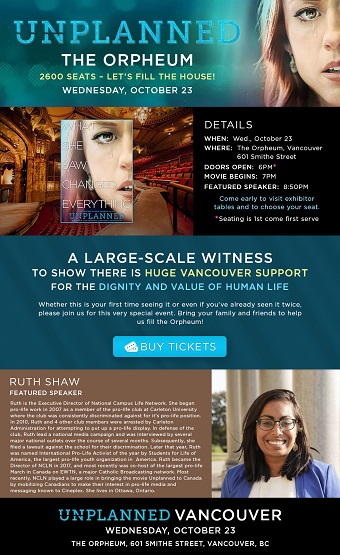 Agnieszka Ruck also wrote about the return of Unplanned to Vancouver October 23:

The pro-life film Unplanned is returning to Vancouver, only this time it will be shown in the grand setting of the 2,600-seat Orpheum Theatre.

The hit film about a Planned Parenthood worker turned pro-life activist churned up plenty of debate and controversy in Canada and the U.S. this summer.

After months of efforts by the pro-life community to bring Unplanned to Canada, the film made a brief appearance in July at a handful of Lower Mainland theatres, playing to packed houses. Despite the sold-out showings, theatre chains declined to keep it any longer and it moved on after only a week.

Go here for the full story. Or here for a Church for Vancouver story about the movie when it first came to town.

Organizers hope to fill the theatre “to show there is huge Vancouver support for the dignity and value of human life!” They are asking churches to include an announcement about the film in their weekly bulletins for October 5, 12 and 19; go here for the proposed write-up.

The NCLN has just posted a We Reject Abortion Solidarity Statement for 13 – 29 year olds to sign in the lead-up to the federal election.

The inspiration behind Unplanned will be in Metro Vancouver herself, November 14:

All Abby Johnson ever wanted to do was help women. Her passion surrounding a woman’s right to choose even led her to become a spokesperson for Planned Parenthood, fighting to enact legislation for the cause she so deeply believed in. However, she experienced a “change of heart” while participating in an ultrasound-guided abortion procedure. She is the author of the best-selling book and movie adaption, Unplanned, which chronicles both her experiences within Planned Parenthood and her dramatic exit.

The Abby Johnson Banquet will be held at the Mirage Banquet Hall in Surrey.

← The sinicization of religion in China: will enforcing conformity work?
Around Town: Climate commentary, Of Games and God, Ride for Refuge . . . →