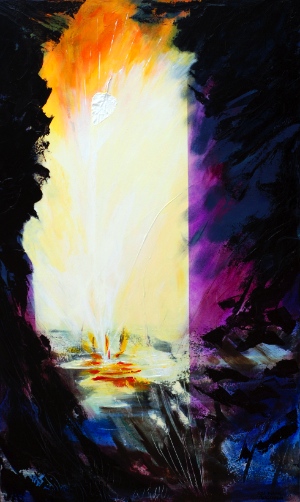 As you begin this reflection, I invite you to start by reading Revelation 12, the most forgotten Christmas passage in scripture.

Mary, Joseph, the shepherds and the magi were not the only ones to witness the newborn king. A dragon also saw him coming. He has seven heads – a symbol of completeness and authority. He also has 10 horns – a reference to immense strength. As Martin Luther wrote, “on earth is not his equal.”

The dragon recognizes the eternal significance of Christmas and directs his fierce strength to thwart the child’s birth. But he is not successful. His attempt to execute the child through Herod is cut short. The baby is born safely and “caught up to God and to his throne” (Rev 12:5). John moves right from incarnation to ascension. This child is born to be the king of the world.

In the next moment, we see war breaking out in heaven (12:7). It’s a cosmic struggle between the dragon and the archangel Michael. In the end, the great war of the universe is a victory for God’s people – but how was it won? That is the whole point of the vision of Revelation 12!

The great war is won, surprisingly, on Christmas Day. A child shivers in the cold air of a Bethlehem night, and Satan shudders in defeat. Because the child was born, “the accuser of our brothers and sisters has been thrown down” (12:10). In this chapter, John speaks of the dragon being “thrown down” on six separate occasions; he seems to relish announcing the good news. The dragon has been vanquished because the woman gave birth to the child.

Then why are things so bad? This is the pastoral reason for this vision. Things are bad because the dragon is “ticked.” He is angry because he has been thrown down never to return to heaven. He knows that the time is short. It is why he is so active; he is going to get as much dirty work done as he can.

The suffering of the church in the world is not a sign of Satan’s victory. It is a sign of the realization of his defeat. If he cannot kill the child, he goes after what is dearest to the child. He goes after the woman (12:13) and he also goes after the people of God – those who “keep the commandments of God and hold to the testimony of Jesus” (12:17).

In Revelation 12, we learn that the dragon in his rage goes after God’s people in three ways. First, John calls the dragon “the accuser of the brothers and sisters.” The Hebrew word ‘Satan’ means ‘accuser.’ The dragon hassles God’s people through the constant engendering of guilt. He slanders them before God and before others, saying they are not worthy of God’s love because of their sin. This warns me about getting caught up in accusation – it’s playing into the dragon’s game.

Second, John says the dragon “deceives the whole world” (12:9). It is a character issue for the dragon; he is fundamentally deceived and deceiving. He is deceived about his place in the universe and he tries to deceive us by tempting us to be God. He constantly plays games with the truth. This warns me about getting caught up in any deception, however small.

The torrent of lies and threats streaming from the dragon’s mouth is a counter-image to the ‘river of life’ flowing from the throne of God. But how do we stand against the dragon’s flood? The loud voice in heaven instructs us: “They overcame him because of the blood of the Lamb” (12:11).

You see, the dragon is right: we are sinners. But he is also wrong: that is not the whole story. There is a Saviour who deals with sin. When the enemy whispers accusations to us, we overcome him by confessing our sin: “You are right. I have sinned.” And then by preaching the gospel to him and to ourselves, “But Jesus Christ has died for me.” So dragon, get out of here!

As Eugene Peterson observes, Revelation 12 is not the Christmas story we grew up with, but it is the nativity story all the same. Because the dragon has been defeated, the peace, hope and love we sing about during this season are not merely faint aspirations, but a concrete reality of cosmic proportions.

Darrell Johnson is senior pastor of First Baptist Church in Vancouver. This piece is part of the Canadian Baptist Advent Reader, published this year.