The Angus Reid Institute has just introduced a new study which suggests that Canadians are becoming increasingly comfortable with a range of religious expressions.

Following is the introduction to their April 4 release, which highlights results of their polling:

While a strong majority of Canadians are inclined to view the Christian and Buddhist religions favourably, a number of other faiths are viewed with more skepticism. In a climate rife with conversations about Islamophobia, Islam itself is viewed unfavourably by almost half of Canadians (46%). A similarly negative sentiment is found when discussing religious clothing associated with that faith – the Burka and Niqab. 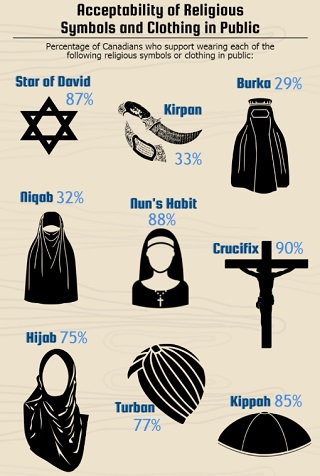 Though Canadians view the Muslim faith with a lower degree of favourability than other religions, this survey reveals an important trend: In both Quebec and the rest of Canada, an increase in favourability from multiple previous waves of reporting has pushed positive opinion to one-third. In Quebec, this represents a doubling of the number of residents who view the religion in a positive light over the past four years.

For the full release go here.

The Angus Reid Institute is partnering with Cardus throughout 2017 to ask Canadians about their beliefs and practices; they will publish results through Infographics. Here is how Cardus presents what it calls its Spirited Citizenship initiative:

Spirited Citizenship is a research, networking and conversation initiative intended to stimulate greater public appreciation for the contribution of faith-motivated activities and organizations to Canada’s social fabric. Spirited Citizenship is a part of Cardus’ Faith in Canada 150, which exists to celebrate the role of faith in our life together during Canada’s 2017 sesquicentennial celebrations. 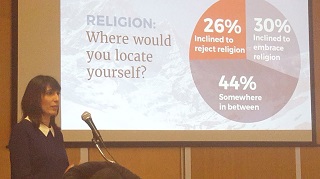 Shachi Kurl presented findings from the new Angus Reid Institute study in Vancouver as part of the Spirited Citizenship tour.

Shachi Kurl, executive director of the Angus Reid Institute, took part in a series of Spirited Citizenship luncheons across Canada, starting in Vancouver March 28. Kurl, who is based here, explained and responded to questions about the new study.

Cardus put out a release April 4, coordinated with the luncheon in Ottawa, where it has an office. Here is a portion of that release:

Dr. Andrew Bennett, chair of Cardus’s Cabinet of Canadians [“an assembly of leading Canadians from industry, politics, religion, academia and culture who lend their respective voices to the discussion of faith as an integral part of our public dialogue”] and Canada’s former Ambassador for Religious Freedom, says the findings are understandable.

“Even when Canadians don’t have the highest opinion of any particular religion – perhaps because they disagree with its tenets – we see that tolerance for religious expression through clothing or symbols is quite high in most cases,” said Bennett. “That’s a good thing. We don’t all need to agree on everything. But as we approach Canada’s 150th anniversary, it’s important to live peacefully with each other amid our differences.”

Bennett adds that the poll is a further indication that Canada is not a secular society.

“We live in a secular state, thankfully, but our society is religious and Canadians have little problem with letting people of faith be themselves in public,” he said. “Faith matters in Canada. It always has.”

For a full overview of the many events and initiatives related to the Faith in Canada 150 initiative go here.