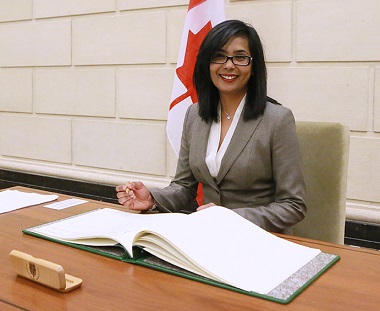 Iqra Khalid, Liberal MP for Mississauga-Erin Mills, sponsored the private member’s motion M-103. The EFC questions the motion, but urges those opposing it to respond with grace.

Private member’s motion M-103 on Islamophobia and religious discrimination passed in the House of Commons on March 23, 2017.

M-103 condemns Islamophobia and calls for the Heritage Committee to study how to reduce or eliminate systemic racism and religious discrimination in Canada, including Islamophobia. (Read the text of the motion.)

The horrific shooting of Muslims in Quebec City and increasing acts of vandalism demonstrate that Muslims are facing hatred and violence in Canada. There has also been a surge in anti-Semitic incidents across the country.

It is a sad reality that discrimination against those of religious faith seems to be increasing in Canada. These acts of hatred, intolerance and violence must be condemned and denounced. The Evangelical Fellowship of Canada (EFC) has denounced these acts and worked to foster collaboration and understanding of religious differences. We are committed to working alongside our neighbours of other faiths for the betterment of our nation.

To that end, we support a study on systemic racism and religious discrimination.

We are concerned that Motion M-103 includes the term Islamophobia. This term could be understood to mean not just hatred or bigotry toward people of Muslim faith, but also criticism of Islam or Islamic beliefs.

The House of Commons has condemned Islamophobia before. Last October, following the tabling of petition e-411, there was unanimous consent to a motion by MP Thomas Mulcair condemning all forms of Islamophobia:

By unanimous consent, it was resolved – That the House join the more than 69,742 Canadian supporters of House of Commons petition e-411 in condemning all forms of Islamophobia.

Some have criticized Motion M-103 for singling out the Muslim faith. We note that the House of Commons has addressed the treatment of one religion before: a motion addressing hatred toward one specific religious group was passed in February 2015, in a motion by then MP Irwin Cotler condemning anti-Semitism, which received unanimous consent.

One key difference is that the 2015 motion on anti-Semitism carefully defined its terms and reasoning, making it clear that criticism of Israel was not anti-Semitism:

c) reaffirms, in the words of the Ottawa Protocol, that, “Criticism of Israel is not anti-Semitic, and saying so is wrong. But singling Israel out for selective condemnation and opprobrium – let alone denying its right to exist or seeking its destruction – is discriminatory and hateful, and not saying so is dishonest.”

It is essential that the same kind of clarity be brought to the study on M-103. M-103 gives the Committee a mandate to study religious discrimination, including Islamophobia. Due to our concerns with the term, we will ask the Committee to use a clearer, more accurate term, such as anti-Muslim hatred, as much as possible.

Hatred and violence toward religious groups and individuals must be strongly denounced, but it must be done in a way that does not preclude criticism or challenge of religious beliefs.

The Standing Committee on Canadian Heritage will study the issues presented in M-103.

What you can do

You can pray. Remember that God says the nations are a drop in the bucket (Isaiah 40:15). Pray for the well-being of our nation. Pray for wisdom for your MP and those on the committee.

Express your concerns to your MP. Your MP represents your riding in the House of Commons and in their caucus. (Find your MP.) See the EFC’s sample letter on M-103 on our website.

Express your concerns to the Heritage Committee. You may ask for assurance that freedom of speech will be upheld/respected, that the term Islamophobia be clearly defined by the Committee, or for a study of hatred and discrimination against Muslims and other religious groups that does not use the problematic term Islamophobia.

Remember, whatever you do, to be respectful and reflect the grace of God, to speak the truth in love. The MP sponsoring M-103 has received hateful and threatening communications. Other MPs have been influenced to support the motion based on the hate-filled communications they have received. As we share our concerns, let us be people of grace and love.

A March 23 Angus Reid Institute poll pointed out that “if Canadians and not their elected representatives were voting, M-103 would fail. . . . More than four-in-ten Canadians say they would vote against the motion condemning “Islamophobia and all forms of systemic racism and religious discrimination”, while fewer than three-in-ten would vote for it. A sizeable number – nearly one-third – say they are not sure or would abstain from voting.”