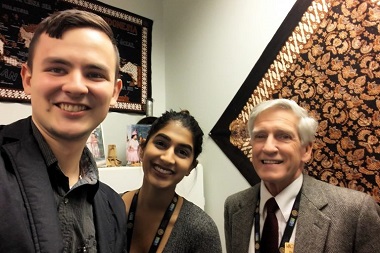 Dennis Kirkley (right), lead chaplain of the Vancouver Airport Chaplaincy, with student interns from the YVR IT department.

“Last month, a middle-aged Mexican woman came to the door. I knew immediately there was something different about her; she was definitely in need of TLC, you know . . . just some loving care” says Dennis Kirkley, lead chaplain at Vancouver Airport Chaplaincy. “I felt the Lord whisper to me, ‘Care for this person’ So that’s what we did.”

He quickly learned why. Polly* was transgender, and had been recently disowned by her family after years and years of not being accepted. Her mother died a few years ago, and her father finally told her to leave his house.

“She’d been living with her father for years because no one in her city would hire her. She had a degree – she showed me the paper. She could teach, but had never been able to get a job,” Kirkley says.

With no options left, a friend offered to buy a flight to Vancouver where they hoped Polly would have better luck. She arrived with no contacts, no plan, no job – and was noticed by Customs, who directed her to the Chapel.

Kirkley and his team connected her with agencies which helped her prepare for the refugee claimant hearing, find accommodation and complete paperwork to settle in Canada.

“When she returned the next day,” says Kirkley, “refreshed, for her final Customs interview, she told us, ‘You’re the first place that has cared for me.’ That gave me opportunity to tell Polly how much God cared for her and has blessed our land, where all God’s people are treated with dignity and respect. When she left for her interview, she had a smile on her face and, I believe, hope in her heart!” 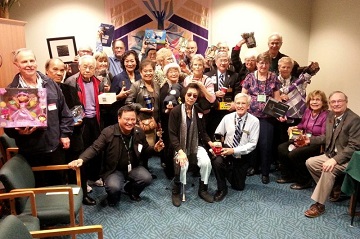 This is the whole YVR chaplaincy team, made up of board members, associate chaplains and host volunteers.

This is just one example of the work Kirkley and his team do at the Chapel. Talk with him for any amount of time, and you’ll hear story after story spill out, as he sketches a picture of the incredible range of human need they encounter. As an inter-faith ministry, the YVR Chaplaincy has met this need with spiritual and emotional support for 30-plus years in International Arrivals.

“One thing about this job is, you have to be ready for anything,” says Kirkley. “You have to be spiritually and emotionally ready. We get everything under the sun walking in the door, from people just popping by to say hello, to heavy, heavy situations.”

“We get women who are leaving an abusive relationship, people being deported, people who are grieving, carrying ashes of a loved one. There are people struggling with mental health. Just last week we had a guy who was trying to go home, but he was so disruptive that he got kicked off a flight. They were already taxiing to the runway, but he was so belligerent they had to turn around and kick him off. Then, of course they brought him to us!” 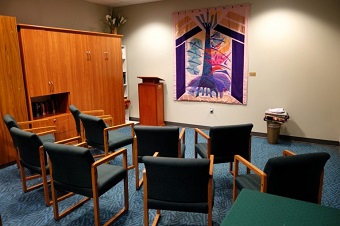 The current Chapel, which is slated to be enlarged next year.

YVR is supportive of their work and recently decided to expand the current Chapel facility in 2018 and provide a second chapel past the security gates in 2020. That’s where most people in the airport are, so it’s a great answer to prayer.

The current Chapel gets more than 1,000 visitors monthly, and operates with a team of 35 volunteers, 10 chaplains and five board members. Currently all the volunteers are Christians, though all faith groups are welcome to participate in this ministry.

The Chapel is also there to serve YVR staff.

“We’re not trying to be a church or a mosque or anything,” Kirkley says, “but it just so happens that there are a number of Roman Catholic Filipinos working at the airport on Sundays who want to attend mass. So for seven years there’s a priest who comes down on Sunday afternoon at 4 pm to hold a mass. And there are a lot of Muslim employees who come on Fridays to pray.”

Kirkley, who works with the Canadian Baptists of Western Canada, wants member churches [and no doubt others] to know the Chapel is available for groups to gather and pray before a trip, or for goodbyes. They offer tours of their own space and the terminal.

“We hope churches will be more aware of us being here, so they can know what God is doing at YVR and they can pray for us. We will be in need of new volunteers as our facilities expand in the future, and we also need the support of area churches because we must raise all our own operating expenses.”

Dennis Kirkley is available as a guest speaker, with either a message or a mission report. “Ultimately we’d like to have churches aware of this marketplace ministry right in their midst.”

*Polly’s name has been changed to protect her privacy.

Zoe Ducklow is senior writer with the Canadian Baptists of Western Canada. This article is re-posted by permission.

1 comment for “Vancouver Airport Chaplaincy: Ready for anything, set to expand”