[youtube=https://www.youtube.com/watch?v=EBPADCpuD9k]All over the world, Roman Catholics and Lutherans are commemorating together the 500th anniversary of the beginning of the Reformation, acknowledging that more unites than divides them.

Last Saturday (March 18), about 30 people, mainly members of Good Shepherd Lutheran Church and All Saints Catholic Church, both in Coquitlam, joined together to take part in that commemoration.

Participants watched a video of encouragement from Bishop Greg Mohr, head of the BC Synod of the Evangelical Lutheran Church in Canada, and Archbishop Michael Miller, who leads the Roman Catholic Archdiocese of Vancouver.

One of the things I notice in the dialogue is that dialogue means entering into a new kind of trust relationship, avoiding the hostile language that has sometimes been used. Gone are the epithets that centuries ago were hurled. Instead, we’re not only learning from each other, but we’re changing our ideas.

That’s right, learning from one another, listening to one another. And I think all of that, then, led to that culmination of a lot of this dialogue, last October, where Pope Francis joined with our Lutheran leaders and had the prayer service in Sweden. I think that marked a significant turning point for us, a recognition of how far we’ve come on this journey, an intentional journey. 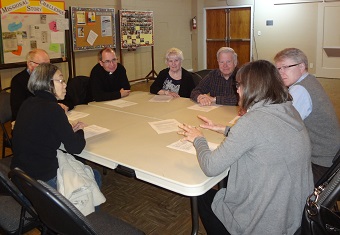 Catholics and Lutherans enjoying the chance to get to know each other at Good Shepherd Lutheran Church.

They also introduced the Five Ecumenical Imperatives (see below) found in the 93-page From Conflict to Communion document created jointly by the Lutheran World Federation and the Pontifical Council for Promoting Christian Unity for this commemoration year.

Much of the rest of the morning was devoted to lively round-table discussion, making sure that the Lutherans and Catholics were well-mixed together.

The dialogue will continue at All Saints this Saturday (March 25). Marjeta Bobnar, coordinator for ecumenical and interfaith initiatives for the Catholic Archdiocese, says there will be a more extensive series in New Westminster later this spring and probably one in Vancouver in the fall. There will also be a joint worship service in October. 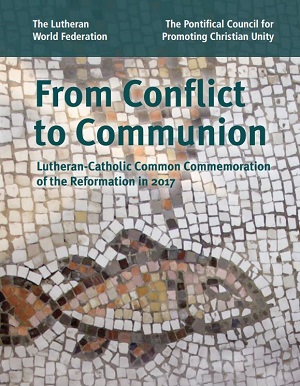 Following is the final portion of From Conflict to Communion (pages 87 – 89), which is devoted to the five ecumenical imperatives discovered by Catholics and Lutherans as they worked together.

238. Catholics and Lutherans realize that they and the communities in which they live out their faith belong to the one body of Christ. The awareness is dawning on Lutherans and Catholics that the struggle of the sixteenth century is over. The reasons for mutually condemning each other’s faith have fallen by the wayside. Thus, Lutherans and Catholics identify five imperatives as they commemorate 2017 together.

239. Lutherans and Catholics are invited to think from the perspective of the unity of Christ’s body and to seek whatever will bring this unity to expression and serve the community of the body of Christ. Through baptism they recognize each other mutually as Christians. This orientation requires a continual conversion of heart.

The first imperative: Catholics and Lutherans should always begin from the perspective of unity and not from the point of view of division in order to strengthen what is held in common even though the differences are more easily seen and experienced.

240. The Catholic and Lutheran confessions have in the course of history defined themselves against one another and suffered the one-sidedness that has persisted until today when they grapple with certain problems, such as that of authority. Since the problems originated from the conflict with one another, they can only be solved or at least addressed through common efforts to deepen and strengthen their communion. Catholics and Lutherans need each other’s experience, encouragement and critique.

The second imperative: Lutherans and Catholics must let themselves continuously be transformed by the encounter with the other and by the mutual witness of faith.

241. Catholics and Lutherans have through dialogue learned a great deal and come to appreciate the fact that communion among them can have different forms and degrees. With respect to 2017, they should renew their effort with gratitude for what has already been accomplished, with patience and perseverance since the road may be longer than expected, with eagerness that does not allow for being satisfied with the present situation, with love for one another even in times of disagreement and conflict, with faith in the Holy Spirit, with hope that the Spirit will fulfill Jesus’ prayer to the Father, and with earnest prayer that this may happen.

The third imperative: Catholics and Lutherans should again commit themselves to seek visible unity, to elaborate together what this means in concrete steps, and to strive repeatedly toward this goal.

242. Catholics and Lutherans have the task of disclosing afresh to fellow members the understanding of the gospel and the Christian faith as well as previous church traditions. Their challenge is to prevent this rereading of tradition from falling back into the old confessional oppositions.

The fourth imperative: Lutherans and Catholics should jointly rediscover the power of the gospel of Jesus Christ for our time.

243. Ecumenical engagement for the unity of the church does not serve only the church but also the world so that the world may believe. The missionary task of ecumenism will become greater the more pluralistic our societies become with respect to religion. Here again a rethinking and metanoia are required.

The fifth imperative: Catholics and Lutherans should witness together to the mercy of God in proclamation and service to the world.

244. The ecumenical journey enables Lutherans and Catholics to appreciate together Martin Luther’s insight into and spiritual experience of the gospel of the righteousness of God, which is also God’s mercy. In the preface to his Latin works (1545), he noted that »by the mercy of God, meditating day and night,« he gained new understanding of Romans 1:17: »here I felt that I was altogether born again and had entered paradise itself through open gates. Thereupon a totally other face of the entire Scripture showed itself to me . . . Later I read Augustine’s The Spirit and the Letter, where contrary to hope I found that he, too, interpreted God’s righteousness in a similar way, as the righteousness with which God clothes us when he justifies us.«

245. The beginnings of the Reformation will be rightly remembered when Lutherans and Catholics hear together the gospel of Jesus Christ and allow themselves to be called anew into community with the Lord. Then they will be united in a common mission which the Joint Declaration on the Doctrine of Justification describes: »Lutherans and Catholics share the goal of confessing Christ in all things, who alone is to be trusted above all things as the one Mediator (1 Tim. 2:5f) through whom God in the Holy Spirit gives himself and pours out his renewing gifts« (JDDJ 18).

For an earlier report about a Catholic document on evangelical Christianity (and other initiatives, including the Catholic-Lutheran one), go here. And here for an article about a significant Catholic-Evangelical Conversation in Vancouver last spring.