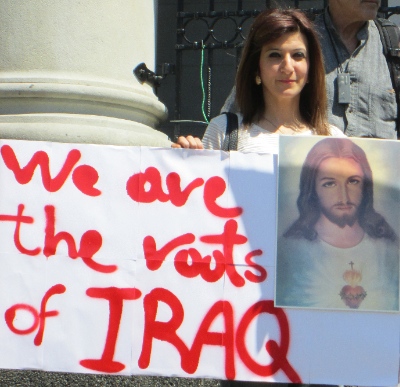 Local Iraqi Christians demonstrated earlier this year, asking the government to do more to help their persecuted compatriots.

Archbishop Michael Miller’s Christmas message to his Roman Catholic flock this year is that “the Holy Family was a refugee family”:

Soon after the splendour of that glorious night in Bethlehem, the gospel presents the Holy Family on the sorrowful road of exile, seeking refuge in a foreign land. Mary and Joseph were obliged to flee from their country to save the life of their child. The Messiah, the Son of God, was a refugee child. And theirs was a refugee family.

As a family, they experienced the tragic fate of all refugees, a fate marked by fear and uncertainty. Their flight into Egypt caused by Herod’s lust for power tells us that God is present wherever people are in danger; wherever they are suffering and fleeing; wherever they experience rejection and abandonment.

In the misfortune experienced by Jesus’ own family, we can catch a glimpse of the painful condition of today’s refugees, evacuees, internally displaced persons and those who are persecuted for political or religious reasons. . . .

As we fix our gaze on the tender tranquillity of the Christmas crib, let us remember that Mary, Joseph and their child were soon to become a refugee family. And let us also think of the tragedy of those families who today are being forced to leave their homeland to find peace on earth. Sing to them the song of the angels, but accompany that with your practical commitment to those who are in any way abandoned this Christmastide.

Go here for the full text. 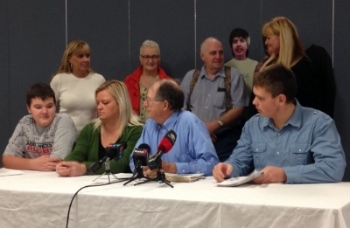 The Juhasz family has been granted sanctuary at Walnut Grove Lutheran Church; they are sitting with pastor Karl Keller.

Walnut Grove Lutheran Church in Langley has again opened its doors as a sanctuary. A single mother and her two sons who say they fled abuse have been staying in the church since the end of November. They have joined José Figueroa, who was granted sanctuary last October (see his story here).

From a story in The Vancouver Sun:

“I felt I didn’t have any choice,” said pastor Karl Keller. The Bible, he said, teaches that those who do not share material possessions with those in need do not have the love of God in them.

“We have . . . a material possession, and there’s somebody in need and if you don’t help them, how can the love of God be in you?” he asked. “For a pastor, that would be atrocious.”

Marianna Juhasz and her sons Patrik Janda and Tamas Juhasz came to Canada from Hungary four years ago. They came to get away from two of Juhasz’s former partners. One, the father of Tamas, now 12, had allegedly abused him during his regular biweekly visits.

Juhasz and her sons applied for refugee status, but lost their appeal in court and were ordered to leave in November. They went into hiding and were granted sanctuary at the Walnut Grove November 30 – just two days after Karl Keller had been part of a panel on Sanctuary: Myths, Movements, Momentum at First Lutheran Church in Vancouver (which also provides sanctuary, to Mikhael Lennikov).

Moses at the movies 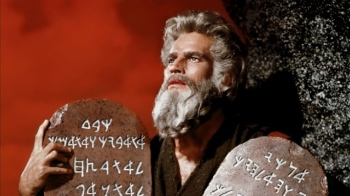 Charlton Heston is one of many actors who have portrayed Moses in movies.

Surrey movie critic Peter Chattaway is a regular contributor to Christianity Today – and he’s particularly knowledgeable about Bible epics, so it’s not surprising he was tapped for a lengthy overview of Moses at the movies, to accompany the release of Exodus: Gods and Kings:
Ridley Scott isn’t the first filmmaker to tackle the story of Moses, and he certainly won’t be the last. There’s drama in the prophet’s confrontations with the rulers of Egypt, there’s spectacle in the miracles he performed to liberate his people, and there are lessons to be learned from the way he led the Israelites and forged them into a nation, not least by giving them the Law. And filmmakers have been turning to Moses’ story for inspiration since pretty much the dawn of cinema.

According to the Bible, Moses lived to be 120 years old, and people have been making movies about him for just about that long, now.

For the full story, go here. And for Peter’s review of Exodus: Gods and Kings, go to his FilmChat blog. Both articles are lengthy, but, as always, well worth reading.

Ward Gasque was one of the founders of Regent College.

“Regent College celebrated the life and ministry of Ward Gasque with the unveiling of a festschrift in honour of his 75th birthday. Serving God’s Community: Studies in Honour of W. Ward Gasque was edited by Susan Phillips and Soo-Inn Tan and co-published by Graceworks and Regent College Publishing.”

So wrote Rosie Perera in Mosaic, Regent College’s alumni newsletter. (A festschrift is volume of writings by different authors presented as a tribute, especially to a scholar.)

“Ward was a pivotal founding faculty member of Regent,” she added, “without whose efforts the college probably would not exist as it is today. Much appreciation was lavished upon him during the evening. About 130 people were present at the gathering, with no fewer than 19 current and former Regent faculty members, 15 current and former board members, 26 former students of Ward’s, and 13 of the festschrift authors, along with many other friends.”

Soo-Inn Tan wrote Honouring a Mentor about his experience with Ward at Regent College.

On December 12, BC Advanced Education Minister Amrik Virk revoked the consent he had previously given for Trinity Western University to offer a law degree program. Here is TWU’s response:

TWU President Bob Kuhn said the university is disappointed with Minister Virk’s decision. “It is difficult to conceive of a justifiable basis for the minister to have revoked his approval of the school of law program. As a private Christian university, Trinity Western has demonstrated its place in Canada’s academic community, delivering some of Canada’s highest ranked professional programs,” said Kuhn. “We believe in diversity and the rights of all Canadians to their beliefs and values.”

Minister Virk consented to a law degree being offered at TWU in December 2013 after his ministry conducted an extensive review of the program. The minister has been under pressure to revoke his consent since October 31 when the Law Society of British Columbia (LSBC) reversed its earlier decision to recognize the TWU School of Law graduates.

“We remain committed to having a school of law,” said Kuhn, “and now have to carefully consider all our options.” Although it is not TWU’s wish to engage in another legal battle, Kuhn said, “there are such important rights and freedoms at stake that we may have no choice but to seek protection of them in court.”

Founded in 1962, TWU has been a part of higher education in British Columbia for over 52 years. TWU has six professional schools, including business, nursing, education, human kinetics, graduate studies and arts, media and culture. The school of law – which will focus on charities, not-for-profit and entrepreneurial law – will be its seventh.

For some good insights into the significance of the issue, read Lorna Dueck’s editorial in The Globe and Mail.

← Books: Need to Know, Bare, Suffering With God, Between Pastors . . .
Staking faith in the Cambie Corridor →