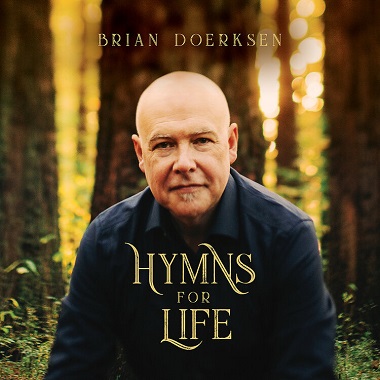 Faith Today recently interviewed Brian Doerksen, focusing on how he fits into the world of worship musicians and on his latest album.

Doerksen, who lives in the Fraser Valley, is known around the world for songs such as ‘Faithful One’ and “Come Now is the Time to Worship.’

Here is a portion of Karen Stiller’s interview with him:

FT: Now with your 10th album you’ve shifted your attention to some classic hymns. Tell us why you did that.

BD: Well, I did that as a culmination, I think, of my writing journey. After 30 years of writing original songs and pouring my heart into them, and at times those songs really connecting and other times, I feel, like some of the songs that most represent my heart never connected – and sometimes that’s pretty hard because you pour yourself into a project and it’s ignored, and you actually think it’s your best work.

And so I felt like I had done everything I’d wanted to do up to this point, and then of course the pandemic comes along. All my concerts are cancelled, and I’m asking myself how I can serve. As I heard people releasing songs that we need for this time of pandemic and new song after new song, all of a sudden I thought maybe we need some old songs heard in a fresh way. What are the songs that have endured through all the storms, all the changes?

I started thinking about my father, who is 84 and still singing. What are the songs that have helped him in his life of faith for, you know, 60 years? And I just started sitting with him, and just singing with my piano, with my guitar. And these hymns just became alive in me, like they were just living. That’s why I called the project Hymns for Life.

There were obviously hundreds and hundreds to pick from. I had to narrow it down. Connected to my life’s calling about whispering and the suffering, I chose to sing hymns about this tender voice of love, about the way creation regenerates us just with its gentle beauty, that God is our refuge. There were certain themes I was drawn to.

FT: Your dad seems very joyful when he’s singing with you.

BD: There’s an incredible life and joy in it. He’s 84. He calls himself a junior senior. He’s just unstoppable with his tenor voice, and I continue to marvel because I’m more of a baritone and he’s a soaring tenor, and because he keeps singing he keeps being able to sing.

And it’s just maybe the most precious way that I know my dad. I have memories of Saturday evenings and he would open up a hymnal and start reviewing the Sunday hymns on Saturday night, to get ready to lead them at our little Mennonite church.

So it was this incredible joy 45 years later to sing these hymns with my dad. He sings four of the hymns with me on the album. There’s something special about it.

Margaret and I know a new immigrant three-generation family of six who are in urgent need of immediate housing. Because they have supportive family in Coquitlam, they would like to stay nearby. The Tri-Cities area (Coquitlam, Port Coquitlam, Port Moody) would be best, but Burnaby and New Westminster would work, too.

A rancher style home, or downstairs unit would be ideal. The accommodation must be wheelchair accessible. The family needs four bedrooms and two bathrooms. Co-op housing would be welcome, as would BC Housing, but so far there have been no openings.

We would love to tell you more about this delightful, warm, loving family we have known now for a year and a half, but privacy requires we do not.

Please call 778.822.5247 or email carlsonelg@gmail.com or hayder.685@gmail.com if you have or know of a place which could be rented to this family. 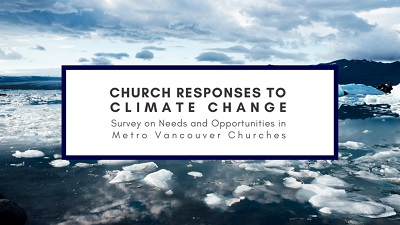 What do local Christians think about climate change? Earthkeepers is asking us to fill out a brief ‘survey on needs and opportunities in Metro Vancouver churches’ so they can answer that question more accurately.

Here is how they describe their survey and its purpose.

For Christians, doing something about climate change is living out our faith – caring for those who need help, our neighbours here at home or on the other side of the world, and taking responsibility for this planet that God has entrusted to us.

Help us understand the church in BC’s attitudes on climate change!

Climate change is one of the greatest creation care issues and moral challenges of this century. Over 70 percent of Canadians agree that Canada needs to do better on climate change (Climate Outreach Canada, 2021). Meanwhile, Tearfund UK’s survey found that 9 in 10 young Christians in the UK were concerned about climate change but two-thirds of the respondents had never heard a sermon on climate change.

Help us put together a picture of the Christian church in Canada’s attitudes towards climate change.

We are Earthkeepers: Christians for Climate Justice, a grassroots, ecumenical group that’s been active in Metro Vancouver since 2015. Our group includes  laypersons from diverse denominational and professional backgrounds, such as engineers, policy analysts, economists, and more – and what unites us all is living out a common vision of biblical ecology, love of neighbour and climate justice.

We have created a short five-minute survey to help us better understand church leaders’ knowledge of and attitudes towards climate change. Results from this survey will help us better serve the church community in Metro Vancouver in educating and engaging with Christians to act on climate change and care for creation.

If you have a leadership role at your church, you can help us by filling out the survey and sharing it with your colleagues. If you’re a church member, please share this survey with your church leaders and encourage them to fill it out.

The deadline for completing the survey is July 31. 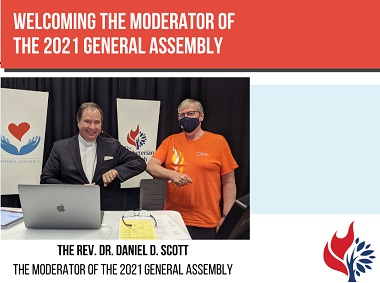 The Rev. Dr. Daniel D. Scott (left) was sworn in as Moderator of the 146th General Assembly of The Presbyterian Church in Canada.

This is not local news, but it will likely have local implications. The Presbyterian Church in Canada (PCC) decided during its General Assembly this week (June 6 – 9) to accept both same-sex marriage and the ordination of LGBTQI people.

In an attempt at compromise, the provisions allow for ‘liberty of conscience’ for ministers and congregations who do not support such practices.

Here is how the changes were described in the General Assembly Highlights for June 8:

Lengthy discussion dominated the meetings on Tuesday regarding Remit B and C on the Committee on Remits report.

These decisions provide Presbyterian ministers with liberty of conscience and the freedom to choose to officiate or not officiate at the marriages of same-sex couples.

Additionally, the church agreed that LGBTQI people (whether married or single) can be ordained and are welcome to serve as ministers and ruling elders.

These decisions accompany other resolutions about policies and programs that will help the church include LGBTQI people more fully in all aspects of ministry. The church will also prepare a confession to all individuals and congregations that have been harmed by the church’s exclusion of LGBTQI.

A strong minority opposed both measures and there is the real possibility that some churches may leave the denomination. Proponents of the traditional view have argued for Gracious Dismissal, meaning that congregations which do not accept gay marriage or ordination might be able to leave with their church properties, something which would not normally be allowed.

Many of the commissioners (delegates) who opposed the more inclusive approach to LGBTQI were from non-Anglo churches, particularly Korean. There are now 20 Korean churches in the PCIC.

The Western Han-Ca Presbytery (which includes Korean churches in Vancouver, Surrey and Abbotsford), posted an Overture April 25, for the General Assembly, which “concludes that it is in the best interests of Korean congregations, sympathetically with other traditional-orthodox congregations, to seek departure from our beloved denomination, and we do so with great sadness.”

They requested “that the General Assembly consider creating a partner or sister denomination” to accommodate “the Han-Ca congregations and other traditional-orthodox congregations who wish to leave the PCC because of the understanding of the theological differences that divide us.”

The Eastern Han-Ca Presbytery posted a similar statement. The Western and Eastern petitions were supported, May 4, by six Chinese churches (including Vancouver Chinese Presbyterian Church) and an Arabic church.

A group of Hungarian Presbyterian congregations is the latest to go on the record about feeling excluded by the ongoing liberal theological drift in The Presbyterian Church in Canada.

Rev. Miklos Szigeti, of First Hungarian Presbyterian Church in Vancouver, was quoted in that post.

Several commissioners made the point that their concerns – including issues related to racism and marginalization, and the possibility of Gracious Dismissal – were not being addressed in a timely manner. Despite their occasional frustration, the overall tone of the General Assembly was polite and mostly cordial all round. However, it would not be surprising to see some churches depart from the PCIC following the decisions made at this General Assembly.

There were, of course, many other issues discussed during the General Assembly as well; go here for highlights.