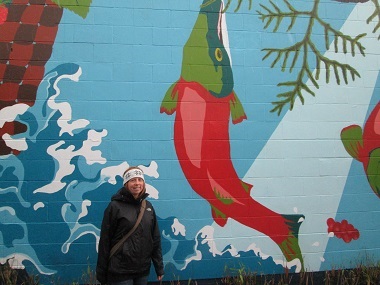 Jenny Hawkinson in front of the Resilience mural, right beside the Heatley Overpass.

Jenny Hawkinson has been working as an artist for a decade, mostly in the Downtown Eastside. For several years she worked with Mission Possible; now she is a DTES street pastor / artist with 24-7 Prayer.

Over the summer, she and fellow artist Cate Wikelund created a giant mural just north of Hastings Street on Heatley; it was completed late last month.

Following is Hawkinson’s description of the work.

September 2017 marks one of the most epic community mural projects in the DTES.
For content and size of participation, the ‘Resilience Community Mural’ must set some
kind of record for public art in the city. 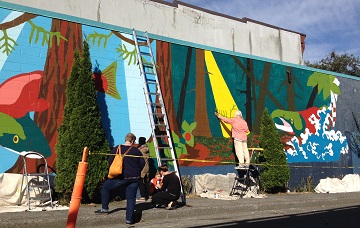 Working on the Resilience mural, which took more than two weeks to complete.

In June, Cate Wikelund and I, (along with the team: a partnership with Strathcona Vineyard Church, Jacob’s Well and Servants) hosted a series of workshops at Oppenheimer Park, Nə́c̓aʔmat ct Library and Jacob’s Well to explore the idea of ‘resilience.’ What keeps you going when times get tough?

The overwhelming responses were growth in the midst of adversity, the weave of community support and the buoyancy of hope. The image that surfaced through the design process is a panorama landscape that speaks to the struggle of overcoming challenges and the release into light and life.

Ironically, the process to complete this mural was fraught with hardship. Our original wall fell through in June and we scrambled for the next two months to find a suitable wall within DTES boundaries. The location couldn’t have been better.

121 Heatley is the location of Pivot Legal Society, an organization that represents and defends the marginalized and the disenfranchised in our neighbourhood. Each element in the image was chosen deliberately to tie these themes together.

The salmon represent the ongoing perseverance and resilience of the Downtown Eastside people. Salmon travel persistently against the current. This struggle reflects the fight for life that many of us engage, for ourselves and those around us. The salmon also play a vital role in the natural and cultural ecosystems of the west coast and are linked to our collective identity.

The old growth forest speaks to longevity, growth from decay and new life. The nurse log provides a home for the sapling; a seed that is fed simultaneously by the life of the salmon. The weaving that contains the image references how our community ‘holds’ and supports us.

The waves honour the Japanese influence and heritage of historical Japantown. They also denote movement and fluidity, which are key elements for resilience.

Over the course of two weeks, 40 community members have participated in the painting of the mural, countless drive-by affirmations have been received, and profound stories around resilience were shared. Our hope is that the mural will continue to inspire and infuse hope and strength into the Downtown Eastside.

The Resilience Community Mural is funded by Community Arts Council of Vancouver. 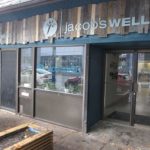 On a related note, one of the partners in the Resilience mural is Jacob’s Well.

Several months ago it looked as though it would have to close its doors because it was evicted from its long-term home at 239 Main Street.

The good news is that they raised the considerable amount of money necessary for a move and opened again September 27 at 543 Powell Street, on the north side, just east of Oppenheimer Park. 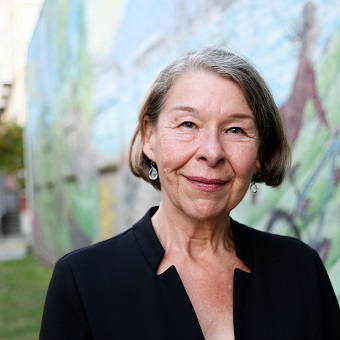 Judy Graves is one of nine candidates for one city council seat.

Like many other people, I have trouble keeping track of who is running for city council, let alone deciding who to vote for. But I won’t have too much trouble selecting my candidate in the by-election for one city councillor this Saturday (October 14).

There appear to be several suitable choices, but to my mind Judy Graves deserves a shot at the job. With housing issues at the top of everyone’s agenda, she seems the natural choice – especially as the vote takes place during Homelessness Week.

When City in Focus awarded Judy their very first ‘caring for the soul of the city’ award, they stated:

Throughout her 33-year career with the City of Vancouver, Judy Graves cultivated caring connections with people living on the streets and in shelters, and served as a tireless advocate on behalf of those marginalized by homelessness.

Graves approached her work in a deeply personal way, walking the streets of Vancouver in all kinds of weather and at all hours of the night, reaching out to people living on the streets and listening to their stories, while helping them navigate the delicate process of rebuilding their lives.

As stated in her campaign bio:

I think back to this exchange between Anna Maria Tremonti, host of CBC’s The Current, and Judy, recorded on the day of her retirement in 2013:

Anna Maria: What is it that makes you different?

Judy: I’m not the only one. There are thousands of people who actually care deeply, many of whom respond . . .

Anna Maria: Where does that compassion come from?

Judy: I think compassion is a natural part of all people. I don’t think I’m in any way unique . . . when compassion is missing it’s an anomaly in the human race.”

Anna Maria: Are you a woman of faith?

Judy: I have deep faith. My work has been my spiritual practice. For that I’m very grateful too.

Anna Maria: Can you even talk about that as a bureaucrat, or is that something that is kind of off the table?

Judy: It’s always been off the table in the City of Vancouver. We speak in a secular voice, and I think it’s been a wonderful gift to have that discipline, because if you have to do your faith instead of talking about it, you can’t kid yourself. If you talk about your faith, you can actually convince yourself that you’re a whole lot better than you are.

Best wishes to Judy on Saturday, and to all the candidates.

Speaking of homelessness, every year Union Gospel Mission creates an innovative advocacy campaign for Homelessness Week (October 8 – 14). This year they have outdone themselves with Encounter, which they describe in this way:

Encounter is an educational Escape Room, hosted by UGM and EXIT Canada, that reveals hidden barriers faced by homeless Vancouverites. The room was developed alongside formerly homeless guests who want you to understand homelessness in a new way. Encounter is not a game; it is an immersive learning experience that will challenge your perceptions and inspire you to ‘counter’ homelessness.

The project has been covered extensively by the media, including The Vancouver Sun, CBC News, Steele & Drex (CKNW) and even the national Weather Network. And that’s not to mention the giant Thanksgiving meal (3,000 people, a ton of turkey) served at UGM headquarters last weekend, aided by various Global News and CTV staff.

The CBC piece included this portion:

The room was designed and built with the help of several former homeless people, including Terry Lawrence.

“I want people to understand it’s not a choice to be homeless,” Lawrence said. “It’s a combination of a lot of things in your life that come together to cause it.”

Lawrence became homeless after he was evicted from his apartment when it was renovated. The next place he had lined up burned down.

Lawrence also has severe social anxiety, which prevented him from navigating the available resources to find another home, and he wound up on the street.

“I went through this whole maze. It was dead-end after dead-end,” he said of a day when he tried to go through several agencies in the Downtown Eastside.

At each office he was told someone was away, sick or he had to come back at a later time.

“You’re always hitting something, and it’s not always obvious,” he said.

Encounter is located in Richmond and is open to the public until October 16. 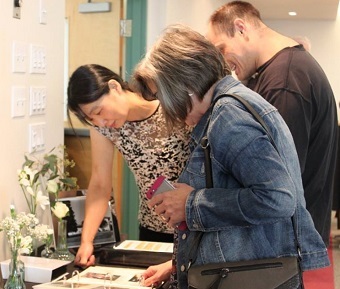 The celebration got me thinking about the extraordinary fecundity of the WestCoast Baptist movement, which has grown from a tiny handful of churches 60 years ago to a very substantial body of churches today. Here is part of the denomination’s description of its history:

In 1955 four churches formed the Capilano Southern Baptist Association [now WestCoast Baptist Association], becoming the first association in Canada. Now, after over 50 years of ministry in Vancouver and Victoria, we have been impacted dramatically over the past five years by cooperative prayer, partnership and participation with teams from across North America.

We look across the landscape of our field and see over 80 churches composed of people from around the world. We now stand poised on the west coast of Canada with a passion to see our city transformed by an almighty God and a plan that has been formed by those same three elements: prayer, partnership and participation.

The hope . . . the dream . . . is that a true God-led movement is developing to a point that the region is transformed to a place where it is evident that God reigns. The WestCoast Baptist Association dreams of seeing 150 healthy churches by the end of 2021.

This is a very focused church, and movement. Towers Baptist states, in its 50-50-50 Campaign:

We just celebrated our 50th anniversary as a registered church. We had a great celebration, but that does not mean we will stop our 50-50-50 initiative. We will continue this into 2018 and add another layer to this strategic plan.

Another goal is to get at least 50 people in a one on one or small group discipleship relationship.

Finally, we want our church to participate in at least 50 random acts of kindness throughout the year.

Best wishes to Towers Baptist for the next 50 years, and to WestCoast Baptist Association.