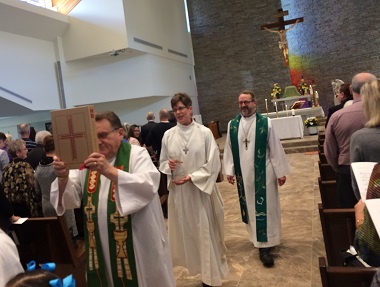 A mixed congregation of Catholics and Lutherans met at St. Clare’s Catholic Church in Coquitlam last Sunday afternoon (October 1). The atmosphere was joyful and collegial throughout the Ecumenical Prayer Service for Unity and the following reception. The spacious interior of the new church building was bathed in sunlight and the commanding view from the church (on Johnson Street) over the Tri-Cities and beyond added to the spacious, forward-looking nature of the event.

The gathering follows up on regional meetings between Catholics and Lutherans in Coquitlam, New Westminster and the North Shore earlier this year.

Bishop Gregory Mohr and Archbishop Michael J. Miller – leaders respectively of the BC Synod of the Evangelical Lutheran Church in Canada and the Roman Catholic Archdiocese of Vancouver – were the main celebrants.

Mohr said, “This is a historic day for our two church communities here in the Lower Mainland.” Miller added, “More than at any time in the past 500 years, both Catholics and Lutherans have come to understand that what unites us is greater than what divides us.”

Their comments also reflect a worldwide phenomenon. The prayer service followed the format of the Common Prayer ecumenical commemoration of the Reformation held last October in Sweden, which was attended by Pope Francis and leaders of the Lutheran Church. 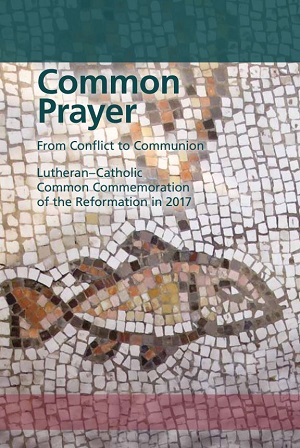 Following are readings from the service, which were interspersed between hymns, comments from the Presider, scripture, prayer and brief sermons from Mohr and Miller. The readings  were drawn from Common Prayer: From Conflict to Communion, which features the text by the Liturgical Task Force of the Lutheran-Roman Catholic Commission on Unity.

Saint Paul writes in 1 Corinthians 12:26: ‘If one member suffers, all suffer together; if one member is honoured, all rejoice together.’

As we read in the document From Conflict to Communion, “What affects one member of the body also affects all the others. For this reason, when Lutheran Christians remember the events that led to the particular formation of their churches, they do not wish to do so without their Catholic fellow Christians. In remembering with each other the beginning of the Reformation, they are taking their baptism seriously.”

As we read in From Conflict to Communion: “Lutherans are thankful in their hearts for what Luther and the other reformers made accessible to them: the understanding of the gospel of Jesus Christ and faith in him; the insight into the mystery of the triune God who gives himself to us human beings out of grace and who can be received only in full trust in the divine promise; the freedom and certainty that the gospel creates; in the love that comes from and is awakened by faith, and in the hope in life and death that faith brings with it; and in the living contact with the Holy Scripture, the catechisms and hymns that draw faith into life . . . Lutherans want to share this gift with all other Christians.”

“Encouraged by the Second Vatican Council, Catholics “gladly acknowledge and esteem the truly Christian endowments from our common heritage which are to be found among our separated brethren. It is right and salutary to recognize the riches of Christ and virtuous works in the lives of others who are bearing witness to Christ, sometimes even to the shedding of their blood. For God is always wonderful in his works and worthy of all praise.” (Unitatis Redintegratio, chapter 1). In this spirit, Catholics and Lutherans embrace each other as sisters and brothers in the Lord. Together they rejoice in the truly Christian gifts that they both have received and rediscovered in various ways through the renewal and impulses of the Reformation. These gifts are reason for thanksgiving.”

“In the sixteenth century, Catholics and Lutherans frequently not only misunderstood but also exaggerated and caricatured their opponents in order to make them look ridiculous. They repeatedly violated the eighth commandment, which prohibits bearing false witness against one’s neighbour.”

Lutherans and Catholics often focused on what separated them from each other rather than looking for what united them. They accepted that the Gospel was mixed with the political and economic interests of those in power. Their failures resulted in the deaths of hundreds of thousands of people. . . . We deeply regret the evil things that Catholics and Lutherans have mutually done to each other.

1. Our first commitment: Catholics and Lutherans should always begin from the perspective of unity and not from the point of view of division in order to strengthen what is held in common even though the differences are more easily seen and experienced.

2. Our second commitment: Lutherans and Catholics must let themselves continuously be transformed by the encounter with the other and by the mutual witness of faith.

3. Our third commitment: Catholics and Lutherans should again commit themselves to seek visible unity, to elaborate together what this means in concrete steps, and to strive repeatedly toward this goal.

4. Our fourth commitment: Lutherans and Catholics should jointly rediscover the power of the gospel of Jesus Christ for our time.

5. Our fifth commitment: Catholics and Lutherans should witness together to the mercy of God in proclamation and service to the world.

Participants in Common Prayer were invited to a Reformation Hymn Festival October 21 at Queen’s Avenue United Church in New Westminster.

A number of other Reformation-related events are coming up soon, including

1 comment for “Ecumenical prayer service brought Catholics and Lutherans together”