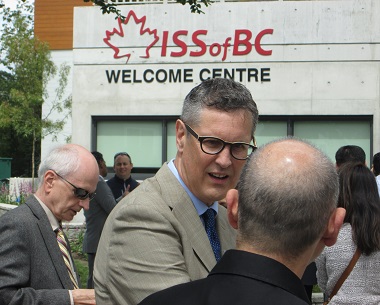 Chris Friesen, director of settlement services for ISSofBC, received a particularly warm reception for the tremendous amount of work he has put in on the Welcome Centre which is now open at 10th and Victoria.

A couple of years ago, neighbours reacted vigorously against the city’s Grandview-Woodland Community Plan which, in their view, involved too little consultation and proposed too much density and too many high buildings, especially near the Commercial-Broadway SkyTrain Station.

After extensive input from the public, the city released its revised plan last weekend; this is how Vancouver Sun writer Matt Robinson described the process:

The plan, which was one of the most controversial in recent memory, sets out a vision for the next 30 years that includes 10,000 new residents, towers as high as 24 storeys, $800-million in public benefits and more than 7,000 new homes. . . . the newest iteration, released last weekend, has toned down the tall towers that heightened community concerns and reduced overall residential growth by 25 per cent.

Two new projects should fit nicely into the plan.1 The first is not a church initiative, but it is on land previously owned by First Vancouver Christian Reformed Church (First CRC) and the church has been an active supporter. The second is directly connected to Grandview Calvary Baptist Church. 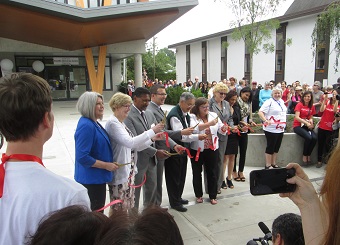 A number of dignitaries were on hand for the ribbon-cutting. The Welcome Centre is on the left, First CRC on the right.

The Immigration Services Society of BC (ISSofBC) completed its Welcome Centre at 10th Avenue and Victoria Drive this month. An open house event held June 25 on the parking lot of First CRC included a ribbon-cutting ceremony in front of the brand new six-storey building. Deputy Mayor Heather Deal and Vancouver-Fraserview MLA (and Minister of Justice) Suzanne Anton were among the dignitaries represented.

The Welcome Centre is a one-stop housing and support centre for refugees which brings together transitional housing and targeted services under one roof. It was built on land provided by the City of Vancouver, with funding support from the governments of Canada and BC and a wide range of donors (Vancity contributed $1 million).

ISSofBC CEO Patricia Woroch thanked First CRC personally, saying, “They started to welcome us even long before we started construction.” Church members handed out a brochure noting free events they will be offering this summer: family movie nights; tea, coffee and English conversation, and a prayer/reflection space. It noted: “We open our space with the hope of welcome, relationship-building, support and interfaith understanding.”

For earlier articles on the Welcome Centre and First CRC’s role, go here, here and here. 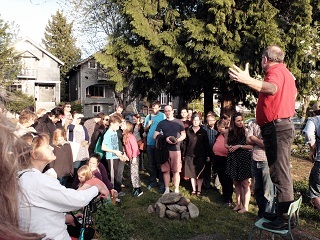 Just nine blocks north on Victoria Drive, Co:Here Housing Community recently held a church-wide ground-breaking at the Grandview Calvary Baptist Church parking lot on the southwest corner of 1st Avenue and Victoria Drive (the church itself is one block west). They will be holding a similar ceremony with government officials (Heather Deal, Suzanne Anton) and representatives from BC Housing, CMHC and Streetohome today (June 30).

Co:Here plans to build a four-story affordable housing complex with 26 units. Grandview Calvary is donating the land, and funding for the project has come from a variety of sources, including individuals, foundations, the city and the province. 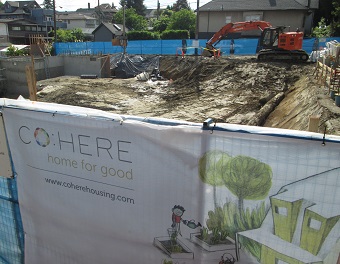 Excavation is under way at the Co:Here site, at 1st and Victoria.

One of the characteristics of Jesus was that he welcomed people – and especially people that were on the edges and vulnerable and poor. It’s been part of the church’s mandate throughout history, and it’s one of the strong concerns that we have as a community – how do we make room for those with less, in our neighbourhoods and in our city. . . .

This is one way we feel churches can make a difference. We have land assets; how can we use them to make room for others and to build housing? So that’s one of the reasons we’re excited about this project. We feel like it can be a model for other faith communities to use their land assets in similar ways.

Go here for updated information about the Co:Here project.

1 Following is the second of seven key principles which informed the city’s planning process:

2. Support a range of affordable housing options to meet the diverse needs of the community

* Increase and diversify the housing stock by providing a range of housing forms, unit types and sizes. For low‐ to moderate‐income households this would include social housing, secured market rental houses, secondary rental, as well as more affordable options for ownership.

* Recognize the value of existing affordable and low‐income housing that meets the needs of low‐ and moderate‐income households, with a particular focus on the retention and managed renewal of secure market rental housing.

* Increase options and enhance stability for the vulnerable populations, including seniors, individuals and families experiencing homelessness, those with mental illness and addictions by ensuring access to shelters, as well as encouraging more supportive housing, social housing, and housing that is adaptable and accessible.