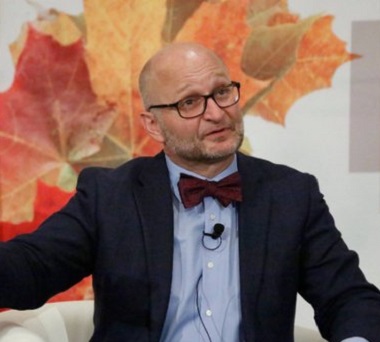 David Lametti said he was skeptical of amendments to Bill C-6, and has now convinced the Conservatives to support a more potent version in Bill C-4.

There has been a chorus of condemnation – or at least serious concern – from a range of Christian groups and others while the House of Commons and the Senate rushed Bill C-4 (banning conversion therapy) through this week.

The bill was introduced to the House of Commons by Minister of Justice David Lametti November 29 and passed by December 1. The Senate passed it December 7. In neither case was there any debate, deliberation or even discussion.

Most confounding to many onlookers is the fact that not one of the 62 Conservative MPs who had opposed the bill during Parliament’s summer session stood up against it this time. And it was a Conservative MP, Rob Moore, who made the motion that the bill should be adopted unanimously.

The Liberals had attempted to achieve this result twice before. Earlier versions died when Parliament was prorogued in August 2020 (Bill C-8) and when the election was called earlier this year (Bill C-6). Opponents of Bill C-4 say it extends further than the earlier bills. 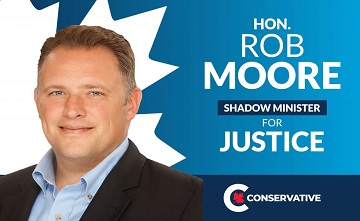 Supporters of the bill point out that conversion therapy has utilized coercive medical treatments, including electric shock, in order to change people’s sexual orientation. The practice, they say, does not properly afford dignity to LGBTQ people.

The Evangelical Fellowship of Canada (EFC), in its December 7 weekly newsletter, stated:

Senators passed a new bill to ban conversion therapy late this afternoon with minimal debate and without sending it to committee for further study. Bill C-4 bans conversion therapy for both adults and minors. The bill will take effect 30 days after the bill receives royal assent.

The EFC is concerned that the definition of conversion therapy is overly broad and we will continue to study the bill’s impact on freedom of expression and religion.

The EFC had posted a sample letter December 3 for supporters to send to their Senators. (ARPA Canada put out a similar ‘call to action’ December 6 and say their followers sent thousands of emails to Senators in a 24 hour period.)

The EFC agreed in a November 29 statement that “Coercive or abusive efforts to a person’s change sexual orientation or gender identity have no place in our communities,” but also explained its concerns with the bill:

A key concern is that the definition of conversion therapy includes efforts to repress or reduce sexual behaviour. With previous versions of the bill, the Justice Department said the legislation would not criminalize

In a media Q and A on previous Bill C-8 in March 2020, Justice Minister Lametti was asked if it would be legal for religious leaders to speak about homosexuality. He replied that if it’s an open-ended and exploratory conversation, it is not prohibited for religious leaders, parents or others. He went on to say: “What is covered by this legislation are practices that attempt to change one’s orientation towards a predefined goal.”

These qualifiers (private, personal, open-ended, exploratory) are not included in the legislation itself, and also raise serious questions about whether a sermon series or a youth Bible study or other programs on sexual ethics offered to those wanting to order their sexual lives in accordance with their religious conscience would be construed to fit the definition of a practice, treatment or service.

And since the definition of conversion therapy includes reducing sexual behaviour, programs offered in a church or ministry setting that consider sexual behaviour could be considered as being toward a “predefined goal.”

The Canadian Conference of Catholic Bishops expressed similar concerns in an October 7, 2020 statement referring to the earlier bill, which concluded with these words:

In outlining some of the serious problems presented by the wording of Bill C-6, we believe it is of the utmost importance that the Government re-examine the Bill with a view to assuring that the appropriate and indeed necessary amendments be considered and undertaken.

This ought to be done in a spirit of true dialogue with faith communities, as well as with a broad range of healthcare professionals, social workers and legal experts across the country.

We conclude by reiterating the commendable purpose of the Bill in as much as it intends to prohibit coercive actions against the inherent dignity of any person; however, the lacunae, ambiguities in language and the potential overreach in its application to current lawful activities are regrettably present and thus need to be addressed.

No such dialogue has occurred, either with concerned groups or now even within the House of Commons and the Senate.

While polls suggest the Liberals can count on considerable public support for legislation banning conversion therapy, they also indicate that a majority of Canadians believe consenting adults should have access to sexuality counselling of their choice.

Opposition, or at least caution, has arisen not solely within the ranks of socially conservative Christians. For example, a couple of National Post columnists wrote on the issue recently. 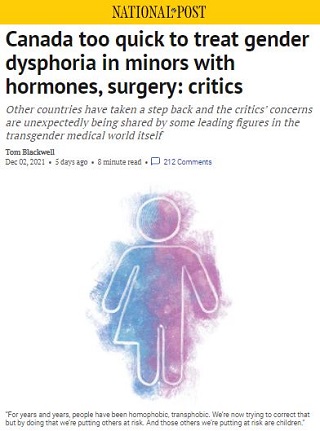 Tom Blackwell made the point December 2 in ‘Canada too quick to treat gender dysphoria in minors with hormones, surgery: critics.’ Pointing out that “Other countries have taken a step back and the critics’ concerns are unexpectedly being shared by some leading figures in the transgender medical world itself,” he said:

But critics worry the federal government’s conversion-therapy Bill C-4 , passed by the Commons with unanimous consent Wednesday, could inadvertently outlaw more careful assessment before transition – or at least discourage therapists from providing it.

C-4 isn’t just a reprint of C-6, though. It goes much further, banning even consenting adults from receiving such counselling or treatment. And whatever one thinks of that idea, Canadian adults should demand Parliament establish what exactly changed Lametti’s mind. Just 12 short months ago he was very clear that he and his department viewed the idea as unconstitutional.

“I do fear a Charter challenge” Lametti told the justice committee on Dec. 1, 2020. “For an adult capable of consenting and who is not . . . being subjected to duress, it (a ban) would be a difficult thing to defend in court. The best minds in my department tried to wrap their heads around it and couldn’t.”

And Globe and Mail columnist Robyn Urback wrote a December 1 opinion piece: ‘The Liberals’ beefed-up ban on conversion therapy is a Charter challenge in the making.’

André Schutten, Director of Law and Public Policy and General Legal Counsel for ARPA Canada, responded in two videos to the passage of Bill C-4 by the Parliament and Senate.

Saying that ARPA Canada had been gearing up to interact with MPs and Senators, he and his team were “deeply surprised first of all, disappointed to say the least, even angry” when the politicians agreed to skip all the Parliamentary procedures for review.

He also said ARPA and others will respond:

From a political/legal perspective, one of the things that we’re already talking about – and we’re talking about it with some of our friends and allies in this fight – is a constitutional challenge.

This law is blatantly a violation of freedom of religion, freedom of expression – the ability to express our views around sexuality, identity, and have others engage with us on those kinds of questions.

Certainly it violates freedom of security of the person under Section 7, the equality rights of the LGBTQ community and individuals within that community to access the kind of help and support – spiritual as well as mental and medical as any heterosexual Canadian would have.

So, all kinds of constitutional questions that we can explore in court. I’m not putting all of my faith and trust in the court system, but it’s certainly an avenue that’s still open to us.

As well, I think that we as a community across Canada should still make sure that we’ve communicated our anger – I think anger is legitimate in this case – and our disappointment and our frustration with our elected members. They need to hear that message loud and clear because there are other things coming down the road. It doesn’t end with C-4.

C-4 is going to have implications for charitable status, and for other things. And there are going to be other issues we want to work on. We need to see principled opposition in our Parliament, both in the Senate and in the House of Commons.

What is becoming clearer to social conservative –  which would include large swathes of Evangelical and Catholic Christians – is that none of the major political parties are representing their views on several issues. 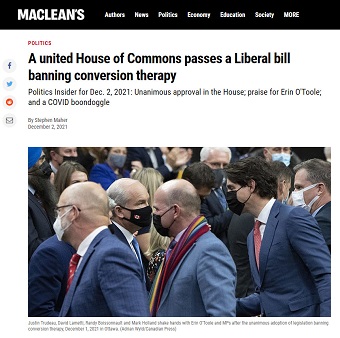 Maclean’s captured the uniqueness of a day in which all parties united to support a bill:

Surprise move: Conservative justice critic Rob Moore moved Wednesday that a Liberal bill banning conversion therapy be adopted unanimously, which it was, which will ban the practice of trying to change someone’s sexual orientation, CP reports.

It was a surprise to see the Conservatives suddenly support the bill, because socially conservative Tory MPs had spoken against the bill, in a milder previous incarnation. The passage of the motion led to non-partisan hugging and dancing in the House.

Erin O’Toole may have been in Prime Minister Justin Trudeau’s good books on that day, but there is no doubt that he is losing ground with the more traditionally conservative wing of his own party as he stakes out a ‘moderate’ position.

While leader of the People’s Party of Canada Maxime Bernier would not be seen by most as a social conservative, he does allow for a wide range of opinion to be expressed within the PPC. Whether that is purely political opportunism – he has little to lose at this point – or simply consistent with his libertarian views remains to be seen.

In Canada, conversion therapies are now illegal. You can go to jail if you help kids with gender dysphoria accept their body. But pro-trans conversion activism is perfectly legal. It’s okay to teach them gender ideology, and encourage them to transition and mutilate their body. . . .

And Red @erinotoole’s “Conservative” Party is perfectly okay with this. They unanimously voted for this bill last week with the other leftist parties.

Time will tell where this all ends. Schutten concluded with these words to put the situation in perspective:

As we move into the year 2022, the church is faced with a huge new obstacle to sharing [the] gospel and applying it to every aspect of a person’s life. . . . But keep in mind the first call of the church is to bring the gospel to bear so that every person has an opportunity to experience the love of God.

Schutten – who obviously has a lot of energy as well as some imagination – also ventured outside of temporal Canadian political and religious circles. He “‘interviewed‘ former Conservative Prime Minister John Diefenbaker about the Conservative Party’s failure to properly oppose the new legislation” (for Convivium, December 8).