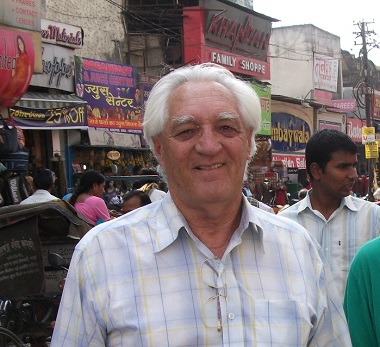 Frank Juelich was born in Germany, studied theology in Abbotsford and left a legacy at Prem Sewa Shikshan Sangh in India.

I’m sorry to hear that Frank Juelich has died, but I love reading about his legacy.

He studied at Summit Pacific College (then Western Pentecostal Bible College) in Abbotsford in the late 1960s, but most of his life was spend overseas.

The Pentecostal Assemblies of Canada posted this memorial:

Our friend, colleague and long-time global worker, Frank Michael Juelich, passed into the presence of Jesus on December 4, 2021, after a brief illness.

Frank was a dearly loved caregiver to thousands of Indian children; a mentor and leader to Bapu Desai and Yohan and Jamuna Raut.

Frank was born in Germany on November 21, 1935, the son of a roof maker. He lived through World War Two, and at the age of 19, having completed a carpenter apprenticeship, he and his brother set out for India by bicycle, looking for adventure.

He worked as a carpenter in Pakistan for six months and then continued to Bombay by merchant boat, eventually hitchhiking back to Germany, after a year-and-a-half away.

Two years later, in May 1958, Frank immigrated to Canada where he settled down in Montreal taking a job as a carpenter. By the providence of God, he began working for a Pentecostal carpenter in Kamloops, BC. Juelich surrendered his life to the Lord in 1964. He told God, “Father, half of my life I lived for myself – the rest is yours.”

Frank’s accomplishments include the translation of the New Testament of the Bible into a tribal language, Mawchi, in Western India. He wrote the book Fearfully and Wonderfully Mad!

The boys’ hostel began in this small hut, which initially housed 10 students and three staff.

“It is the tale of how God worked through my life to build the children’s homes we call Prem Sewa Shikshan Sangh. Although it is an autobiography it is more a story of our great God.”

He also wrote Letters to the Saints and Aints, which is a collection of letters that he has written since 1972.

Over his 40-plus years in India, his greatest accomplishment is the establishment of Prem Sewa Shikshan Sangh.

He founded and developed homes and schools for poor and marginalized children; one for boys on a 17.5-acre piece of land at the edge of Nagpur, that now houses, feeds and educates 600 – 650 boys, and a home for girls some 650 km west of Nagpur at a place called Manjari, near the city of Dhulia. It houses, educates and feeds some 530 mainly tribal girls.

Frank had an awesome sense of humour which can be seen in his writings and how he interacted with people. He was always ready with a quick and comical answer and loved to host visitors from all over the world.

Known affectionately as Bhaisaheb, Frank was buried as requested in his beloved India on Sunday, December 5, 2021.

Prem Sewa Shikshan Sangh continues to be strong under the leadership of Bapu Desai.

Desai, now director of the work, grew up in the home, as did Yohan Raut, president of the society.

Frank graduated from Western Pentecostal Bible College in 1970, before pursuing a call to India. He has faithfully served in Southeast Asia since 1972, and has helped thousands of underprivileged children in his time there.

Frank was a model for compassion, vision and faithful ministry to the Gospel of Christ. His ministry in India changed countless lives, and he left a legacy of kindness and love that will be felt for generations.