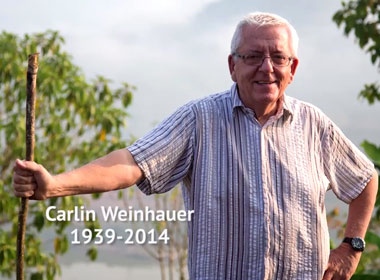 Carlin Weinhauer spent the past 10 years with MB Mission; this picture is from their memorial video.

Carlin Weinhauer passed away April 19, following a short but intense battle with cancer. Best known for his 20 years as pastor at Willingdon Church in Burnaby, Carlin was not originally from this area and his influence was certainly not confined to the west coast.

Thus it is probably not odd that the only time I actually met Carlin was when I shared breakfast with him in Moscow during a conference focused on the North Caucasus – even though I had read and written about him for years, and occasionally saw him up on stage at one his church’s events.

This was toward the end of Carlin’s time at Willingdon, not too long before he began working with MB Mission. He made many trips overseas before, during and after his years at Willingdon.

Following is a brief excerpt from his wife Marcia’s eulogy, starting with their time at Willingdon; for the full text go here.

“God moved Carlin and Marcia once again to congregational ministry upon invitation to serve on the pastoral team at Willingdon Church in August 1984, where they served with joy for just over 20 years. During the years at Willingdon they visited a number of countries in Asia, Africa and eastern Europe on short-term mission trips. The church planted a church among the Chechen people in 1997.

“As a young person, Carlin spent time poring over the pages of the National Geographic magazine having, early on, a deep interest in geography and travel. God prepared and blessed his life with opportunities to minister far and wide in many countries, even to brief teaching opportunities in China.

“Carlin has had a great love for the church and a deep desire to see young pastors preach through the Word. In December 2004, Carlin retired from pastoral ministry at Willingdon and was invited to join the lead team of MB Mission, January 2005, serving in mobilization and media. Since then, Carlin has led teams of people to MB [Mennonite Brethren] mission fields, primarily Thailand, along with Brazil, Burkina Faso and India. He has served with joy, deeply loving God’s work far and wide.

“Carlin is survived by the love of his life, Marcia, his wife of 51 years, and his daughters, Cheri (Howard and children, Jodie, Camden and Brenna), Lynda (Allan and children, AJ, Joey and Trevor) and Rebekah (Brian and children Alex and Stuart). He also leaves behind his sister Carolyn of Lincoln, Nebraska.”

Randy Friesen, general director of MB Mission, said, “Our mission family has been deeply impacted by Carlin over the past 10 years that he served with us . . .

“He brought his love for prayer, the Word and missions to our lead team. He was a mentor to me personally and to our mobilization team as he launched Celebrate Mission nights across North America, numerous vision trips and more recently our Thailand development building projects. We will miss his God-given passion for life and all things eternal. Carlin was a leader who finished well!”

There will be a memorial service for Carlin Weinhauer at Willingdon Church, Saturday, May 3, 10 am.