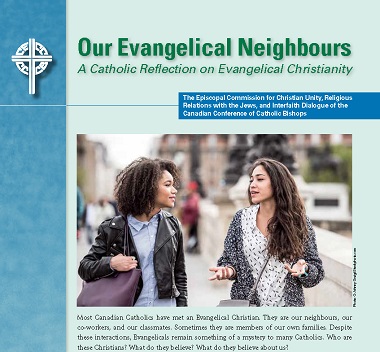 You know times are changing when the Roman Catholic Church hosts the first local celebration of the Reformation.

The 500th anniversary will take place in 2017, but St. Mark’s Theological College on the UBC campus will be hosting The Catholic Church as a Church of (the) Reformation: Why Catholics Can and Should Celebrate the 500th Anniversary of the Reformation, November 3.

(Presumably Protestant churches will join the celebration one of these days; let’s hope those events take place with the same spirit!)

Even before the St. Mark’s lecture, Pope Francis will fly to Malmo, Sweden next Monday (October 31) to mark the joint Lutheran-Catholic commemoration of the 500th anniversary of the Reformation.

A Catholic Reflection on Evangelical Christianity

This coming together is being marked on the national level as well. Last week the Canadian Conference of Catholic Bishops (CCCB) published Our Evangelical Neighbours: A Catholic Reflection on Evangelical Christianity.

That’s a positive sign on its own, but even more encouraging is that “The resource was developed in close collaboration with the Evangelical Fellowship of Canada (EFC), an official dialogue partner of the CCCB, since 2010.” (Bruce Clemenger, president of the EFC, has commended the final document.) 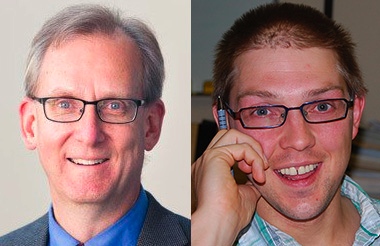 Jeff Greenman (left), president of Regent College, and Brett Salkeld, archdiocesan theologian for the Archdiocese of Regina, led a conversation on how evangelicals and Catholics can work together, last spring at Coastal Church.

One participant in the national dialogue process that led to this 12-page publication was Brett Salkeld, archdiocesan theologian for the Roman Catholic Archdiocese of Regina, who took part in a very encouraging Catholic-Evangelical Conversation at Coastal Church earlier this year.

The core of the two-hour event was a gracious exchange between Salkeld and Jeff Greenman, president and professor of theology and ethics at Regent College. Go here for my write-up and a link to a YouTube video of the full event.

Following is the introduction to Our Evangelical Neighbours:

On the one hand, Catholics feel hurt, or at least confused, by fellow Christians who are sometimes unsure whether we Catholics are even Christians. On the other hand,  Evangelicals offer some exciting things that we may not always find in our own parishes: lively worship music, a strong sense of congregational community and a genuine enthusiasm about the Christian faith that comes out in daily conversation. What are Catholics to make of all this?

With the decline of mainline Protestantism in Canada, Evangelicals are more and more likely to be the non-Catholic Christians that Catholics encounter today. There are Evangelical churches, educational institutions and service projects all across Canada, and they are growing and vibrant. Catholics also meet Evangelicals in the halls of power, where they are frequently on the same side of contentious social issues.

Furthermore, Evangelicalism is rapidly expanding in many places around the world, especially the global South – in places like Brazil, for example, with a historically Catholic population. Anyone who wants to know about the place of Christianity in Canadian society and in the world at large cannot ignore Evangelical Christianity.

Evangelicalism is not a denomination in the strict sense of the word, though it sometimes functions as an umbrella term for groups that include denominations such as Pentecostals, Baptists or the Christian & Missionary Alliance, as well as many nondenominational or independent churches.

If there is a “megachurch” on the outskirts of your city that is not obviously affiliated with another Christian community, it is probably Evangelical. The adjective “Evangelical” does not just describe churches or denominations; it also describes individual believers. There are people in the mainline Protestant communities, and even in the Catholic Church who, because they share the basic defining features of

Evangelicalism that we will investigate below, will, for example, identify themselves as Evangelical Christians.

Following the introduction are these sections:
* A Brief History of Evangelicalism (quite nuanced and fair-minded);
* Defining Characteristics (focus on Holy Scripture, Salvation by Faith, Centrality of the Cross, Evangelism);
* What Do Catholics Think About Evangelicals? (mixed – appreciate scriptural literacy, virtuous lives . . . but concerned about lack of unity, sacramental life . . .)
* What Do Evangelicals Think About Catholics (some doubt they have a personal relationship with Jesus; others feel on the ‘same side’ as culture becomes more secular);
* Prospects for Future Dialogue (“Fortunately, there are many venues where this dialogue is taking place . . . Some within each community are scandalized by these relationships.”)

To read Our Evangelical Neighbours online go here; it can also be ordered in print form. The whole Christian community is indebted to Canadian Catholic Bishops for undertaking this initiative; thanks to Evangelical Fellowship as well, for cooperating so closely.

2. The CCCB is looking ahead to its own version of Pope Francis’s visit to Sweden – Commemorating the 500th Anniversary of the Reformation:

In January 2017, the Canadian Conference of Catholic Bishops (CCCB) and the Evangelical Lutheran Church in Canada (ELCIC) will be releasing joint material to commemorate the 500th anniversary of the Reformation in 2017. The resource is entitled, “Together in Christ: Lutherans and Catholics Commemorating the Reformation“. . . .

3. On October 25, the Faith Today blog (under the aegis of the EFC) featured leading Canadian sociologist Reginald Bibby on Canada’s Catholics: The World is Coming to Canada:

. . . Today, there is a global religious revival taking place. Christianity and Islam are growing at unprecedented rates that are translating into mind-boggling numbers. Enlightened religious demographers at the Pew Research Center in Washington, DC tell us that, by 2050, there will be close to three billion Christians and three billion Muslims around the world. In China alone by that time, there could be anywhere from 70 to 100 million Christians.