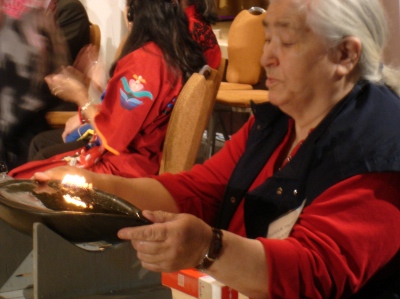 I was getting desperate. It was the last of four days at the Montreal Truth and Reconciliation Commission meetings (in April). Sorrow, despair, hope, anger, defeat, defiance and confusion washed over me like waves buffeting a message bottle destined for the shore.

A few courageous testimonies of enduring faith in Christ stood out like an island in the vast ocean. At times, the surf of emotion threatened to suck me back into the uncertain depths. Hopeful waves nudged me closer to shore, only to be forced back more sprays of heartbreak.

“Dear God, give me a message,” I prayed.

At a town-hall style meeting, a young, muscular Mohawk man (I’ll call him John) vented about the injustice done to his mother under the Duplessis orphanage scheme, started in the 1930s and continued for 30 years.

These ‘orphans’ – born to single mothers in church-run hospitals – were snatched from the birthing table and placed in mental hospitals, where their residence would garner federal funds unavailable to the provincial government for housing ‘regular’ orphans.

Many of the children, abused and subjected to medical experiments, developed mental health challenges. Of course, many of these orphans were indigenous children.

John’s mother was a Duplessis orphan.

“Harper wants to build more jails for us,” John growled. “He should be building jails for the churches.” I winced. John motioned desperately: “I can’t let go of my anger, I wake up every day with anger; I hate it,” he confessed.

His hopelessness was dragging my little bottle out to sea.

As the town-hall participants dissipated, I met a Christian from Rwanda whose family suffered under the genocide in that country at the hand of fellow Christians. I thanked him for his public comments about his father’s teaching from Romans 12:21 on overcoming evil with good. 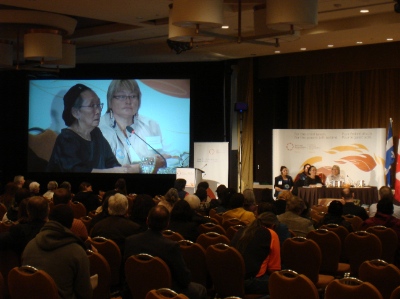 “I was a Duplessis orphan,” he said, “and I have had no education but everything I’ve learned is because of Jesus! I don’t love the church, but I love Jesus.” He was beaming.

I needed the refreshing walk back to the Mennonite-run House of Friendship where I was staying with my friend Dave Heinrichs, associate pastor at Eagle Ridge Bible Fellowship in Coquitlam.

Dave revealed that after the town hall meeting, he thanked John for his honesty. I was all ears. After making more disparaging comments about the church, John asked Dave where he was from and why he was in Montreal.

He was experiencing the Montreal TRC with the hope of encouraging more church people to attend the Vancouver event in September, Dave said, then hesitantly admitted he was a pastor in a Mennonite Brethren congregation.

“Mennonites?” exclaimed John, “I love the Mennonites! They do so many good things! I was baptized in the House of Friendship.”

He quietly ventured, “I’ve kind of gotten away from that now.” They parted, with Dave pledging to pray that John would find his way through his pain and anger.

This final super-wave flung my message firmly onto a beach along B.C.’s coast, ready to be discovered and unsealed. It reads:

This message has taken a long time to get here. The Canadian Indian Residential School program and related policies visited unspeakable horror on the lives of many of the 150,000 students who were forced to attend between 1870 and 1996.

Because the writer is a white Christian and a member of the dominate culture, there are now barriers between him and his Aboriginal neighbours.

However, hopelessness need not prevail! Christ is present and actively reconciling. If Christians humble themselves and take time to listen, miracles can happen. Barriers can be overcome. It will take perseverance, but truth and reconciliation are within our grasp. Seize the opportunity!

P.S. Please pass this message along and dispose of the bottle in an appropriate recycling container.

Don Klaassen is a member of Sardis Community Church in Chilliwack and works for Outreach Canada. The Vancouver TRC will take place September 18 – 21, at the PNE fairgrounds. It will be the centre piece of Reconciliation Week.