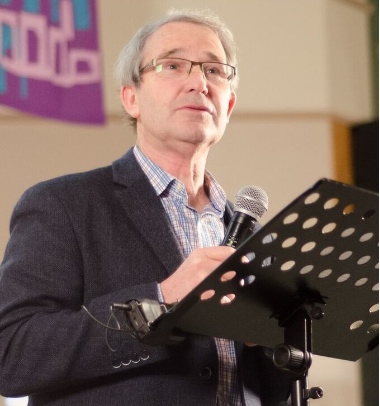 There was a buzz in Regent College Chapel as people came together for Regent Exchange: Churches and the Housing Crisis January 27. Members of Christian communities across the Lower Mainland gathered alongside urban planners, social workers, architects, city officials, students, journalists and academics to discuss how churches can respond to Vancouver’s current housing crisis.

This was the first event in Regent College’s new discussion series, Regent Exchange. Ceri Rees, director of communications and public engagement at Regent College, says the series seeks to explore “the relevance of Christian faith to matters of public interest . . . in a way that is genuinely thoughtful and helpful.” 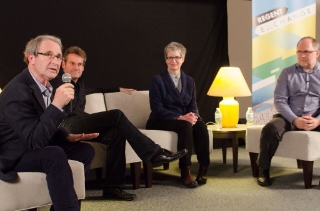 The evening opened with host David Ley’s observation that high housing prices and low wages have produced a situation in which the average house price in Vancouver is 10.8 times the city’s average household income: a ratio more than double Demographia’s threshold for “severe unaffordability.”

Ley cited many factors that have contributed to skyrocketing housing prices in Vancouver, including rapid population growth, cheap mortgages, foreign investment and, most recently, the crash of the Canadian dollar.

He noted as well the negative impacts of high housing prices on people and businesses in the city: high individual debt loads, difficulty in attracting and retaining qualified workers, a mass exodus of young and educated people, overcrowding, a declining birth rate and rapidly increasing inequality.

It will take a concerted, long-term, multi-party effort to fully resolve these issues. However, Ley noted that many churches have the power and the motivation to bring about positive change in their own neighbourhoods, on a smaller or larger scale. The evening’s three panelists provided insight into some of the positive responses and creative solutions that have been embraced by churches in Vancouver.

The first presenter was Joan Seidl, president of 127 Society for Housing, a housing initiative begun more than 30 years ago by parishioners of Christ Church Cathedral.

Over the years, a passion for providing affordable housing has driven 127 Society to partner with other organizations in Vancouver’s Downtown South to build more than 250 units for low income seniors and persons with disabilities. 127 Society provides various forms of support for its residents and encourages them to make the units their long-term homes.

Seidl spoke of some of the challenges that 127 Society has faced and overcome in its efforts to provide affordable housing: most notably, opposition from the surrounding community.

A few years ago, the society began negotiations with the city to replace one of its deteriorating properties in Yaletown with a new and larger facility featuring more low-income rental space. The project received approval from city council, but encountered significant opposition from neighbours who did not wish to see the development of more low-income housing in their neighbourhood. These neighbours were ultimately unsuccessful in their efforts to block the project through both political and legal channels, although they did succeed in delaying construction. 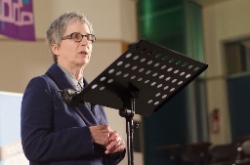 The experience convinced Seidl of the importance of church engagement in pressing political issues such as affordable housing.

“It was clear that if we remained quiet and politically passive, leaving the political heavy lifting to the city, there was a real chance that the new Jubilee House would never be built. We realized that we had to be prepared to publicly state and defend our values and had to rally supporters to help.”

“When church people spoke and wrote,” continued Seidl, “it was clear that they had nothing personal to gain, that they spoke out of deeply held values and a commitment to social justice. Their words had weight. Politicians listened.”

Fighting for the housing project has “been a painful and costly journey,” reflected Seidl, “but one that we think in the end will have been worth it. We learned along the way that we cannot remain politely ignorant in our little churchy world. The church indeed has the potential to be a powerful voice for low income housing.”

The second panelist to present was Tim Dickau, the long-time pastor at Grandview Calvary Baptist Church, a congregation known for its active engagement in the Commercial Drive neighbourhood.

Dickau attributes the housing crisis in part to “a failure of imagination and courage at the individual, communal and systemic levels.” He encouraged churches to build on the uniquely creative and fruitful vision of community in the gospels.

In identifying this vision, Dickau and his church congregation have been led by two particular narratives. The first is the story of the banquet found in Luke’s gospel, in which Jesus encourages his followers to imitate God’s unbridled hospitality: “When you give a luncheon or dinner, do not invite your friends, your brothers or sisters, your relatives or your rich neighbours; if you do, they may invite you back and so you will be repaid. But when you give a banquet, invite the poor, the crippled, the lame, the blind, and you will be blessed.” That imperative, states Dickau, “has challenged, stretched, infuriated and inspired [Grandview Calvary] over the years.”

The second key narrative driving Grandview Calvary’s vision comes from Jean Vanier, founder of L’Arche. In Community and Growth, Vanier notes: “In the past, Christians who wanted to follow Jesus opened hospitals and schools. Now that there are many of these, Christians must commit themselves to . . . new communities of welcome, to live with people who have no other family and to show them that they are loved and can grow to greater freedom and that they, in turn, can love and give life to others.” 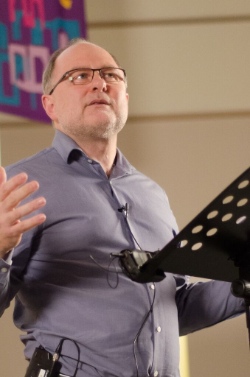 This can be lived out on a small or large scale. Dickau’s own family has shared a home with more than 46 individuals over the years. He highly recommends the practice of shared life, suggesting that “one of Vancouver’s main housing problems is that it has too many empty bedrooms.” However, Grandview Calvary is also seeking to address the need for community on a broader level through its Co:Here project.

Co:Here is a development to be built on the church’s current parking lot. The project will include underground parking for the church, a floor of community space, a community garden and 26 units of social housing.

While the housing units are primarily intended for low income individuals, a small number will be occupied by people of moderate economic means. The goal is to provide a supportive, stable community for residents and to serve as “a sign of a reconciling community that Jesus described in his parable, where we cross economic boundaries to share life and to participate in mutual transformation.”

Dickau hopes that this project will provide a model for other faith communities. However, he notes, churches interested in addressing the housing crisis must combine a creative approach to community with other forms of engagement. “It is vital that we as churches are engaging multiple options for creating a more livable city at all levels – the individual level, the communal level and the systemic level.”

The third presenter of the evening was Robert Brown, president of Catalyst Community Developments. Catalyst is a non-profit housing society that helps churches and other community organizations leverage their assets – particularly real estate – for social change.

Many churches, uncertain of what to do with their real estate assets in Vancouver, end up selling their land to a private developer in exchange for a fixed sum and perhaps some worship space.

Brown encourages churches and other community groups to avoid this outcome. Rather than giving up their interest in the property, community groups should use their assets in a way that supports their mission while bringing added value to the community.

When working with churches, Brown insists on clarifying the church’s goal and mission at the outset in order to ensure that any development of its property is consistent with that mission.

Catalyst’s recent work with Oakridge Lutheran Church provides an excellent example. When the church came to Catalyst, it had an aging building, a shrinking congregation, and more property than it needed. The church’s desire was to contribute to its community, generate a revenue stream for its ongoing mission and maintain a long-term interest in the entire development. 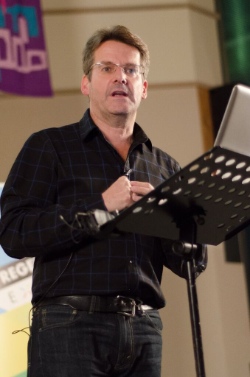 Catalyst worked with the church to achieve these ends through the development of a mixed-use building with retail space on the bottom floor (rented at market value to provide a steady revenue stream), a worship and community space on the second floor, and four floors above containing lower-market rental housing. Both the community space and the affordable housing above it provide value to the neighbourhood and place the church at the heart of local community.

Brown argues that these types of developments are critical to restoring the church’s connection with the broader community.

“In history,” he notes, “churches were at the centre of the community and were used by the community for a range of different things.” He argues that a creative and flexible vision for church construction and design is key to recovering this role.

Catalyst is not just a consultant with real estate expertise; it brings money to the table. Part of that money is its own: it often retains a share in past projects, which provide a revenue stream for reinvestment in future projects. It also maintains connections with individuals and organizations who want to invest their money for the benefit of the community. While Catalyst’s investors get a slightly lower return that they would receive from a private development project, they are enthusiastic about the opportunity to put their money to good work. 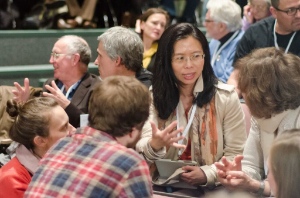 Discussion was lively at ‘Churches and the Housing Crisis.’ Photo by Ken McAllister.

A lively Q&A session following the presentations emphasized the importance of building connections. Representatives of both churches and the city expressed a desire to work together more effectively in order to address the need for affordable housing.

It also became evident that greater communication between church congregations may open up significant opportunities for cooperation and the development of creative housing projects.

Finally, all parties noted that connection with surrounding communities is of central importance in the long-term success of affordable housing projects, whether faith-based or otherwise.

For churches and non-profit organizations that are considering developing their own land for housing, a good first place to start is the Vancouver Affordable Housing Agency (VAHA). VAHA can help groups do an initial appraisal of their land and understand how they can and cannot develop it. The city also has grant programs for affordable housing.

In early May, Regent Exchange will host a third and final event in this series on housing to explore ways of tackling the housing crisis at the systemic and policy level. Sign up here to find out about this next event.

For more information contact Rebecca Pousette, administrator of ReFrame, at rpousette@regent-college.edu or 604.221.3308.
This article is re-posted by permission from the Regent College website.
If you missed the Regent Exchange event, you will soon have another chance to hear from David Ley; he will be the special guest of City in Focus at the Vancouver Club on the morning of March 18 as he addresses the topic Make Vancouver Home: But How Do We Afford to Live Here?
Share this story