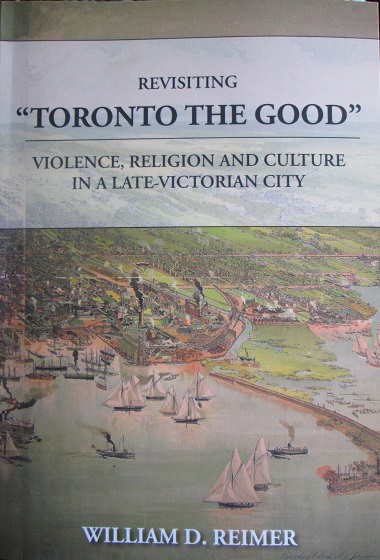 A new book and a just-released study offer some fascinating insights into the positive role of religion in Toronto – and suggest some avenues for exploring the role and value of local congregations in Vancouver.

William D. Reimer (known locally as Bill, the long-time manager of Regent College Bookstore) has written a serious academic book – based on his doctoral studies at UBC – about “violence, religion and culture in a late Victorian city.”

He explains the purpose of Revisiting ‘Toronto the Good’ in this way:

Late Victorian Toronto was marked by sharply decreasing homicide rates that persisted in the following decades. At precisely the same time, British Evangelical Protestantism became entrenched in the social and political fabric of the city. . . . The thesis of this study, baldly stated, is that interpersonal violence declined in late 19th century Toronto because of a prevalence of British Evangelical Protestantism.

Reimer doesn’t make this claim casually. With extensive footnotes and a 22-page bibliography, he has drawn carefully from archival sources, newspapers of the time, primary sources and many books.

The publisher points out:

Based on an analysis of 1880 – 1899 homicide rates and close readings of the Central Prison register, this study argues that a British Evangelical Protestant reforming ‘machine’ produced new cultural norms, ultimately forging dense social relationships in all sectors of Toronto society. These reciprocal networks fostered high levels of empathy that in turn lowered levels of male interpersonal violence across the city. This transformation of male society reflected the larger religious-social agendas of evangelical women and men throughout North America and Britain, but on an urban industrial frontier.

Revisiting ‘Toronto the Good’ is a complex study which cannot be properly represented in this brief comment. But I will sum up with Reimer’s final words, which are, essentially, a challenge to Christians in all settings:

The larger argument of this thesis is that for a significant period of time, a religious culture in late Victorian Toronto produced a relative peacefulness across a variety of class, religious and increasingly ethnic distinctions. . . . This decline of interpersonal violence allowed for new spaces of human interaction. Religious discourse mattered in late 19th century Toronto.”

Moving to the present day, the Halo Project has taken its first step in “valuing Toronto’s faith congregations.” The project is described in this way:

The Halo Project was published by Cardus, “a think tank dedicated to the renewal of North American social architecture,” and was funded and supported by a wide range of faith and civic groups. Following is the executive summary of the study:

In 2010, Partners for Sacred Places and the University of Pennsylvania’s School of Social Policy and Practice completed a pilot study of the economic impact of local congregations in the city of Philadelphia. By exploring almost 50 different factors in 12 congregations, the research group tested a new quantitative approach to how congregations influence local economies.

In Canada, the social, spiritual and communal value of local congregations has long been accepted. Their economic value to their surrounding neighbourhoods is a different matter entirely. While the economic valuation of “soft assets” has gained increasing traction in recent years in a number of social and service sectors, no contemporary analysis of the Canadian religious landscape exists.

Through the fall of 2015 and spring of 2016, an initial study of 10 local congregations in the city of Toronto was conducted to test the viability of the Philadelphia methodology in the Canadian context. With minor revisions, intended to reflect Canadian culture, society and economy; as well as methodological changes suggested by the Philadelphia research team in light of their own initial findings, the project studied economic impact in the same seven broad areas. Data was collected through interviews and self-reporting made by senior clergy, lead administrators and key lay leaders.

When the modified value matrix was applied to the data, a cumulative estimated economic impact of approximately $45 million was revealed.

This paper serves as an initial report, anticipating a more comprehensive research project that intends to study the local economic impact of more than 50 congregations from differing faiths, reflecting the full religious diversity of the city of Toronto. This report outlines the need for such a quantitative tool in the Canadian context, methodology employed, values ascribed, limitations of the study, findings and conclusions.

The study concludes that, as in the United States, local congregations in the city of Toronto can be viewed as critical economic catalysts. They serve as economic engines that not only support local economies but also contribute to the common good of all. Results of this initial phase suggest that economic valuation of local congregations is possible within the Canadian context and that findings are comparable to those in the Philadelphia pilot study.

Finally, subsequent study and further refinements in methodology are expected to offer further validation and potentially lead to more streamlined means of helping congregations assess their own “Halo Effect.”

I am looking forward to seeing a similar study in Vancouver.

To learn some more about how Toronto came to be known as ‘Toronto the Good,’ read Ed Hird’s instructive article about Mayor William Howland. (Ed is rector of St. Simon’s Church in North Vancouver.)