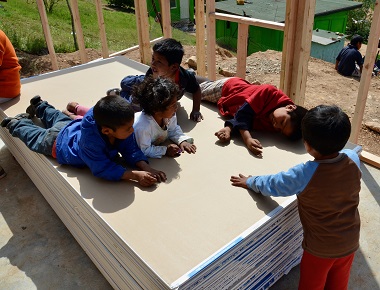 Children enjoying the excitement at a building site in rural Mexico.

In the work I do as a pastor, I have always longed to see something inexplicable happen. The Christian faith tradition is full of these kinds of stories, but I am not sure the faith communities I have called home always believe they can happen today.

Back in 2015, I had travelled with a small team to a remote town in rural Mexico. We were there to build a house for a family who had been living in an old, rusty, grey van.

The construction site was in the middle of nowhere – the kind of place where you hope nothing happens because of how far you know you are from a hospital. But, as life often goes, that is exactly where the accident happened.

We had just hammered the last nails into the small house’s wooden frame, when children from the neighbourhood started jumping off a pile of drywall. The stack could not have been higher than two or three feet, and so it looked like a rather innocent game. That is, until one of them, the youngest, landed awkwardly. We all heard the loud crack.

I don’t recall exactly what happened next, but I do remember looking down at his leg, and seeing a shape and colour that did not look normal. And I remember our team medic saying in a bit of a panic, “This is broken – someone call 911,” before he realized there was no 911 to be called there.

I was mostly struck by how many times I had said “uh” to God. That, and the obvious realization that nothing happened. After I said “amen,” we put the boy inside a little shed, in the shade, so we could figure out an actual plan. But then, the strangest thing happened: about five minutes later, the boy we prayed for was up on his two legs, running after his friends as though nothing had happened.

There it was, right in front of me: this thing I had wanted to see my whole life. Something inexplicable had finally happened. And yet, my reaction was not to fall on my knees yelling, “Hallelujah!” No, my reaction was to say, “Oh, I guess it wasn’t broken.”

The thing is, the pages of the first followers of Jesus’ earliest witness are replete with astounding stories of ordinary life being confoundingly interrupted by messianic interventions.

From accounts of healing to encounters with angelic beings, the mundane is unraveled and goodness overflows. Throughout his ministry, Jesus models a Spirit-filled and Spirit-led life, and teaches those following in his footsteps that they, too, would do these things.

In John 14:12, Jesus goes even further, saying his followers would do “greater things” than him. He ultimately commissions them and empowers them to decisively enact the ongoing undoing of the kingdom of this age.

And the astounding part is this: those first followers of Jesus do exactly what he said they would do. Smoked out of their fearful seclusion by the outpouring of the Holy Spirit at Pentecost, the early church heals and proclaims and envisions and raises the dead back to life. This is the witness that has been passed down for over 2,000 years through the institution of the church.

And yet, these pages stand oddly in contrast with some of the worldviews that have shaped me. In practice, much of what scripture says about the Spirit has seemingly been filtered, truncated and rationalized.

The confounding has been excised into palatable news rather than really good, life-changing news. In its absence, the Spirit-driven missional impulse generated by the undeniable and irresistible presence of God’s Spirit seems to often be replaced with the manufactured tedium of simply making nice people nicer.

I wonder how much of my current contemporary ecclesiology is the natural progression of a God who is moving with eschatological intent towards scientific pragmatism, or whether this loss of a pneumatologically-informed spirituality is indeed a deficiency to be lamented.

I look no further than my own reaction to what happened in Mexico. I have often wondered since that day how many incredible moments I have missed out on because they felt more normal than expected. How many times in my busy life has the holy come crashing down into my world, and I just shrugged it off with a, “Huh, that was weird?”

At the same time, this experience has also made me appreciate the normal things of life – if only because they might be more holy and spectacular than I realize. This, the pursuit of God’s undeniable presence, the pursuit of God’s good and holy Spirit, is at the heart of the questions that animate my discipleship and, in turn, my leadership.

We are living in strange times and, just maybe, the way forward itself requires a willingness to be a little strange, too. 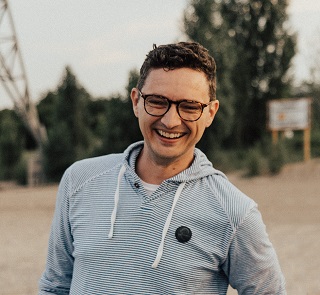 He grew up in Quebec City, completed his undergraduate degree at Redeemer University in Ontario and then moved to Stellenbosch, South Africa, where he did his Master of Divinity. He most recently completed a Doctorate on the Holy Spirit through Fuller Seminary in California.

He lives in West Vancouver with his wife Meghan and their two young children.

← Gear for Good Causes: turning unwanted music & sound gear into $$$ for charities
Feast and Fallow: connecting people to food and each other →