An Affordable Housing Rally will take place at the Art Gallery May 24.

It’s time to be heard! There is no end in sight to the stratospheric home prices in Vancouver and its impact is being felt across our communities.”

Such is the rallying cry for the Affordable Housing Rally to be held this Sunday (May 24) at the Art Gallery. And while there are demonstrations every day at that very spot, this one seems likely to attract quite a crowd, especially among the younger demographic.

A key supporter of the rally is Eveline Xia, whose #DontHave1Million campaign has focused the conversation about sky-high Vancouver real estate prices and propelled her into the public spotlight this spring. Writing in Metro, Emily Jackson put it this way: 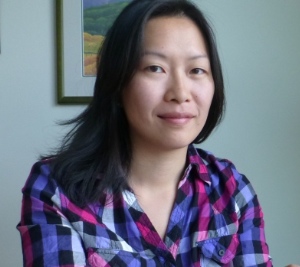 Determined to raise awareness about how difficult it is to stay in the city for young, middle class citizens – she means everyone who doesn’t make six figures, whether they’re artists or musicians or lawyers – Xia took to Twitter. She created a hashtag campaign called #DontHave1Million that encourages people to post pictures of themselves with the hashtag, their job and their age.

Xia, a Mount Pleasant resident who had never used Twitter before, hoped the campaign would grab the attention of politicians and policy-makers and encourage them to tackle the unaffordability problem.

“If you look at other cities, other countries where locals are being pushed out, they have done something about it,” she said. “Do we want a city hollowed out of the middle class?”

A vacancy tax on empty condos was pitched during the 2014 municipal election, but local politicians have yet to take decisive action on the hot button issue complicated by foreign ownership.

Xia has been overwhelmed by the response to the campaign, 99 percent of which she said is positive.

At the time of posting this article, more than 700 people had indicated they would be going on the Affordable Housing Rally Facebook page, and a May 20 Georgia Straight article said the demonstration “could be one of the loudest calls for government action on housing affordability in recent memory.” 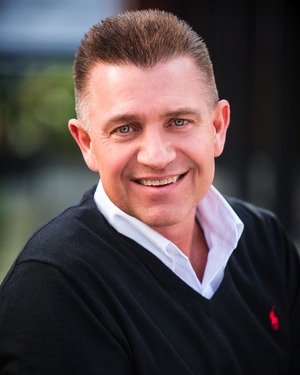 The crowd will no doubt include many from local churches. Pastor Sam Rima of Tenth Church encouraged his congregation to consider taking part:

As a church in Vancouver, we are concerned about the growing disparity between those who can afford to live in Vancouver and those who are increasingly displaced.We’re aware that some families struggle to make rent, many young professionals face impossible home ownership in their lifetimes, and homes sit vacant while the homeless seek daily shelter.

That’s why we’re encouraged by an Affordable Housing Rally on Sunday May 24th, at 12 pm at the Vancouver Art Gallery. If you’re interested in attending, come on out and implore the Federal, Provincial and Municipal governments to do more to help the low-middle class people of this city.

Here’s what to expect at the rally:

Stats from a younger Canadian’s perspective:
Did you know today, younger Canadians have to save up to three times longer for a 20 percent down payment than their parents did in the 1970s? For home buyers in 1976 the average time it took to save up for a down payment was five years. Today the Canadian average is 10 years. The average in BC is 15 years. And the average for the Greater Vancouver area? Not yet calculated, but it may just be too disturbing to think about! Even with historically low rates today, higher home prices mean average monthly mortgage payments are skyrocketing.

But aren’t people making more today than they did in the 70s? Nope: Today’s average wages for Canadians aged 25 – 34 is $20.77, compared to $23.41 in 1976 (figures adjusted for inflation). So these higher housing costs, in addition to lower wages make living and staying in Vancouver an uphill battle.

Church groups have been involved in housing issues for many years. Here are several avenues to pursue if you want a little more background before going to the rally: 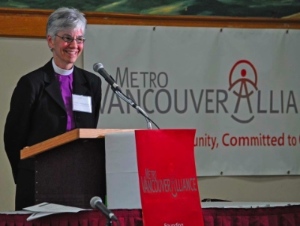 Last year I wrote that “Lower Mainland Christians are hopeful the newly formed Metro Vancouver Alliance (MVA) – a broad, non-partisan coalition that includes people of faith – will develop solid solutions to some of the critical social issues facing their communities.”

Since that time MVA has been moving ahead briskly. At an October 9 Municipal Accountability Assembly, MVA got the major mayoral candidates – all of whom were in attendance – to agree with its commitments and proposals on four major issues: social isolation, transit, poverty and housing.

Here is what the mayor candidates, including Gregor Robertson, agreed to in terms of housing:

Rising land values have led to a crisis of affordability and an epidemic of renovictions and greed evictions. Vancouver is ranked as one of the least affordable cities in the world.

* Make available to the Mayor of Vancouver and city staff personal testimony, community case studies and all information needed to identify weaknesses in current by-laws

* Work with our member institutions to develop innovative solutions to the affordability crisis.

* Strengthen, enforce and extend by-laws which ensure decent standards of maintenance and protect tenants from renovictions

* Make covenants a component in all new developments, locking in truly affordable purchase and rental housing in perpetuity

About half of the member organizations of Metro Vancouver Alliance are Christian, so the church is well established in the movement. 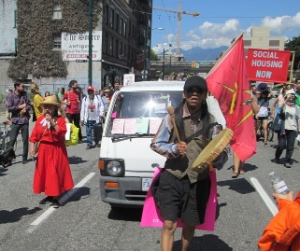 Streams of Justice takes part in many actions related to improving social housing.

The Affordable Housing Rally organizers are clearly aiming primarily at young middle class people who want to own a home. But they do recognize that the issue reaches beyond their immediate focus: “Please note that we are not trying to detract from low-income housing or solutions for the homeless – we welcome everyone to the conversation!”

One group that has paid attention to the poor and homeless over the years is Streams of Justice. Here is part of its statement on Housing and Homelessness:

The housing crisis in BC is a serious justice issue. . . . [It] impacts a diverse group of our family, friends and neighbours, including: seniors, Indigenous people, single parents, immigrants and those without citizenship status, women (especially those fleeing violence and abuse), working people, couples with children, people with disabilities, etc.

Streams of Justice emerged in early 2007 as the homeless counts in Vancouver were skyrocketing and people sleeping on the streets were becoming increasingly visible. This was a local and immediate issue of (in)justice that we needed to engage. We began by trying to understand why this was happening, and what were the systemic causes of increasing homelessness. As our structural analysis took shape, so did the need for action.

Go here to read about some of the actions Streams of Justice has undertaken; it often works with Social Housing Alliance BC.

Several Christian organizations have provided housing over many years. Groups such as More Than a Roof, Baptist Housing and the 127 Society for Housing have given serious thought to the issues involved.

David Ley is a long-time UBC professor of urban geography. “An abiding focus,” he says, “has been the experience of wealthy business migrants. This work is drawn together in Millionaire Migrants: Trans-Pacific Life Lines (2010).” One of his current projects is “a comparative study of housing market bubbles, their causes, social consequences and policy responses in five global cities.”

In partnership with Regent College, Ley will lead a bus tour July 18 to consider Postmodern Urban Spaces. He will take participants “through Vancouver’s downtown and inner city districts and will emphasize the changing social values of postmodern culture as these are expressed and reproduced in the urban landscape.”