Update (October 10): Good news – as in good media coverage. The Sun, the Courier, News 1130 and 24 Hours all covered the MVA’s Municipal Accountability Assembly.

As far as I can see, Metro Vancouver Alliance (MVA) still isn’t getting the kind of press coverage it deserves. But that may change when delegations from its 50 member organizations, representing 200,000 citizens, gather at the Italian Cultural Centre for a Municipal Accountability Assembly, Thursday night (October 9).

I certainly hope so, because the organizers have worked hard, for years, to pull this movement together. And since the MVA drew 650 delegates representing community, labour and faith groups to its founding assembly March 19, activity been constant.

According to the MVA, “This exciting exercise in non-partisan grassroots democracy will bring together close to 1,000 people from across our membership, along with senior civic, faith and community leaders. Politicians of all parties will be asked to commit to MVA’s proposals on housing, transit, poverty and social isolation, and work with us on making them a reality.” Since this spring, four Research Action Teams have developed specific proposals in the run-up to the November municipal elections. 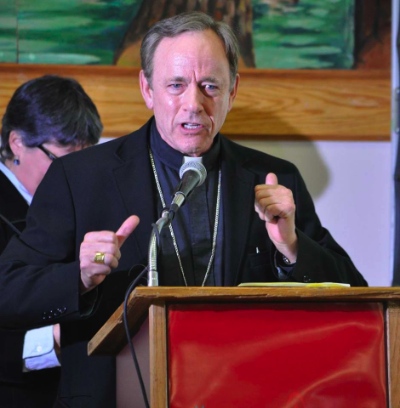 Michael Miller, Archbishop of the Roman Catholic Archdiocese of Vancouver, speaking at the founding assembly of the MVA. The Catholic Church is a strong supporter of the movement. Photo by Randy Murray.

There are 25 faith groups among the 50 member organizations; the Roman Catholic and Anglican communities are particularly well represented, but Baptists, Presbyterians, Lutherans and ecumenical bodies are also in the mix. The Catholic Archdiocese of Vancouver is one of four sponsoring groups, along with Vancity Saving Credit Union, the BC Teachers Federation and IBEW Local 258.

I will let MVA speak for itself. And hope to see more media coverage from now on.

Metro Vancouver Alliance is a broad-based alliance of 50 civil society institutions from across the Metropolitan Vancouver who work together for the common good. Over the past year and a half the Alliance has held thousands of conversations with people from our member institutions about the challenges they face and the changes they want from to see from their Civic government. 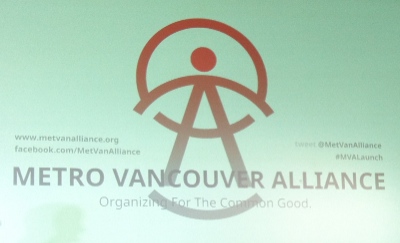 At our Municipal Accountability Assembly, we will commit to working with Vancouver’s Civic government on the four issues – social isolation, transit, poverty and housing – that our member institutions felt they had in common and could work on together.

We will also ask candidates in the upcoming municipal election to commit to specific, achievable, proposals – proposals that will make Vancouver a more inclusive, fairer, better housed city, where citizens can travel on a well-planned, accessible, affordable transit system.

Here are our commitments and our proposals.

Social isolation is a widespread problem with serious long-term consequences. In a recent Vancouver Foundation survey, one in four Vancouver residents said that people felt socially isolated, disconnected from their community, lonely and depressed.

A city on the move

Since 2007 public transit service levels have remained practically unchanged, while demand has soared. MVA supports the Mayor’s first choice of re-directing a portion of the BC Carbon Tax to sustainable transportation improvements.

Vancouver has the second-highest child-poverty rate among Canada’s 20 largest urban centres despite the fact that a third of poor children live in working families. Every member of the community is affected by low-wage poverty.

Rising land values have led to a crisis of affordability and an epidemic of renovictions and greed evictions. Vancouver is ranked as one of the least affordable cities in the world.